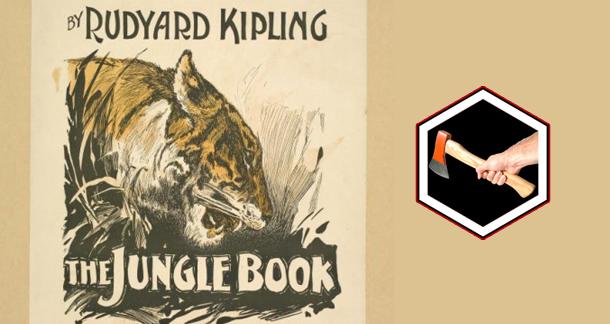 That's right, we're culling two classics for the price of one this time: Rudyard Kipling's seminal children's collections, The Jungle Book and The Second Jungle Book.

Time out—children's classics? Who started the rumor that these books were for kids? Do parents actually know what's in these things, or are they trusting that Walt Disney stuck as close as possible to the source material? We're going to have to clear up a few things.

The Jungle Book and The Second Jungle Book, by Rudyard Kipling (Macmillan, 1894 and 1895, respectively).

In continuous print for nearly 120 years; Goodreads ratings of 3.93 and 3.81, respectively (3.96 when rated together); countless radio, stage, comic book, and animated and live-action film adaptations.

Future Nobel Laureate Rudyard Kipling, born in British India and raised in Bombay and Portsmouth, England, was one day shy of his 27th birthday and living in Vermont (of all places) when his first child was born on December 29th, 1892. Winters in Vermont can be dreadful…ly boring, and in the stillness of those cold months, the new father began composing a series of short fables set in the India of his youth. It is alleged that he meant the collection, titled The Jungle Book, to exist as a kind of allegorical guide for his young daughter, and when it was published in 1894, it was an immediate hit with children around the world. It included stories about a troop of wild elephant catchers, about animals in the military service of Queen Victoria, Empress of India, about fur seals in the northern Pacific, and everyone's favorite, a trio of tales about a young boy named Mowgli who was raised by wolves.

The Jungle Book was so popular that a sequel, The Second Jungle Book, was published the following year. This book, featuring five more Mowgli stories, as well as tales about an Indian beggar who becomes the hero of a mountain village, a narcissistic river crocodile, and a group of Inuit struggling to survive in the Arctic Circle, was another global best-seller. Film and television adaptations began popping up as early as the 1930s and haven't stopped since: Disney's 1967 animated adaptation of The Jungle Book, the last film that Walt Disney himself produced, made over $70M in the U.S. the year it was released; famed Warner Brothers animator Chuck Jones put out popular television versions of stories "Rikki-Tikki-Tavi," "The White Seal," and "Mowgli's Brothers" in the 1970s; a live-action adaptation starring Jason Scott Lee and a young Lena Headey was a hit in 1994; and rumor has it that Disney is trying to make another live-action version happen in the near future. 120 years after they first appeared in print, the man cub Mowgli, Baloo the bear, Bagheera the panther, Shere Khan the tiger, Rikki-Tikki-Tavi the mongoose, Kotick the white seal, and Kaa the python are still recognizable the world over.

There's a reason why Rudyard Kipling was the first English-language writer to win the Nobel Prize in Literature (and at just under 42 years old at the time, he's still the youngest Lit winner ever). The Nobel committee cited Kipling's "power of observation, originality of imagination, virility of ideas and remarkable talent for narration" as part of their reason for awarding the young Brit writing's most prestigious prize, and they were dead right. Both Jungle Books are filled with incredibly vivid stories of Indian life and landscape, Arctic dreams and drama, and the natural laws that guide all creatures. The Mowgli stories are as much parables and guides to moral living as intriguing jungle action tales. The talking animals of Mowgli's world follow strict Jungle Law to ensure that everything and everyone can coexist perfectly.

It's also fair to say that there would be no Tarzan, no Julie of the Wolves, possibly even no Peter Pan without Mowgli, the über-popular lost boy who helped inspire them. Kipling even weaves intricate political subtext into these children's stories, making subtle commentary on the dangers of overhunting in "The White Seal," the effects of colonization on native populations in "The Undertakers," and the dangers of greed in "The King's Ankus." Not only that, but The Jungle Books have traditionally been a major source of inspiration for the Cub Scouts ever since Robert Baden-Powell, a close friend of Kipling's, introduced themes from the books in the first scout guides in the early 1900s. Exciting, exotic, moralistic, and with talking animals! What's not to love?

Okay, so this guy was super racist, right? Is that a thing? People are aware of this? Maybe racist isn't exactly the right word, but Kipling was taking major swigs of the imperialist Kool-Aid. Like most of his other works (but especially Kim, the story of an Indian-born Irish boy who becomes a British spy by imitating various stereotypes on the subcontinent), The Jungle Books tend to depict native Indians as stupid, superstitious backwater heathens, while good British soldiers are the epitome of order and right in the world. In most of the stories, Mowgli, representing both Man and (probably) the British incursion into Indian life, rules over all of the native inhabitants of the jungle thanks to his increased intelligence, strength, and cunning (oh, and he can literally stare down animals, just look them in the eye and scare them away, a power basically any British soldier would have had at the time). In one of the most poorly veiled allegories of the two books, a British railroad builder blasts a mugger crocodile that had been worshipped by a local village into three pieces with an elephant gun. Moral of the story: the natives aren't fit to rule themselves and should count themselves lucky that the British are there to rule them (a point that Kipling makes even clearer four years later in his poem "The White Man's Burden").

Oh, and who said that The Jungle Books were supposed to be for children? There's a nice story in the first book about young seals being clubbed to death and the older generation just writing it off as something that happens, oh well. (But don't worry, one seal decides to fight back—if by "fight back" you mean "run away and find a place where humans can't find him.") There's also a fun bit in the second book where starving Inuit are forced to eat their sleigh dogs. And don't forget the assassination of Shere Khan, the massacre of several hundred wild dogs, the brutal mass murder of a group of baby snakes—their only crime being born without legs, and the chain of brutality that comes from Mowgli deciding to steal a fancy elephant hook from a cobra assigned to guard a dead king's treasure room. And the "Oh no he didn't" icing on the "That boy got some nerve" cake? After all the terrible things Mowgli puts his "friends" through, after ordering them around and leading them to their usually potential but sometimes actual deaths on several occasions, he decides to just peace out at the end and live with Man after all. If that isn't a lesson in gratitude…

Despite all of its many, many, many shortcomings (not least of which is where these random snow stories came from), The Jungle Books are actually fantastically entertaining. Of course, you have to keep an open mind and remember that they were written by an avowed imperialist during a time when the sun was rumored to never set on the British Empire. If you can't abide colonial mindsets and inherent racism, even in historical settings, then these aren't for you. If you're not a fan of old school fables with clear-cut good vs. evil battles and lots and lots of killing, then again, maybe avoid these. If you can stay objective, though, and try to enjoy these simple stories for the power of Kipling's immense literary ability, the vivid worlds that he creates, or the unique glimpse into history that The Jungle Books provide, then you certainly won't be wasting your time.

All but the most devout adventure/imperialism/talking animal fables haters should probably give these a chance. If nothing else, it's worth it to see just how far off Disney was in their adaptation. (Hint: very, very far.) These are short story collections, remember, so you can always read the first couple and then decide whether to keep going. No pressure; it's not like anyone is holding an elephant gun to your head.

Are 'The Jungle Books' Racist or Not? And Why You Should Read Them Either Way

Joshua Chaplinsky from New York is reading a lot more during the quarantine August 23, 2013 - 8:49am

I read these as a kid and remember really enjoying them. I was surprised by how different they were from the Disney cartoon, but I don't remember being fazed by the violence or aware of the inherent racism. The seal clubbing was sad, though.

The Jungle Books have been adapted for stage and screen several times. I grew up while reading all of these books written by the legend Rudyard Kipling. You can click here https://www.assignmentmasters.co.uk/courseworks/ for further info as this is definitely one of the best stuff ever written for children.