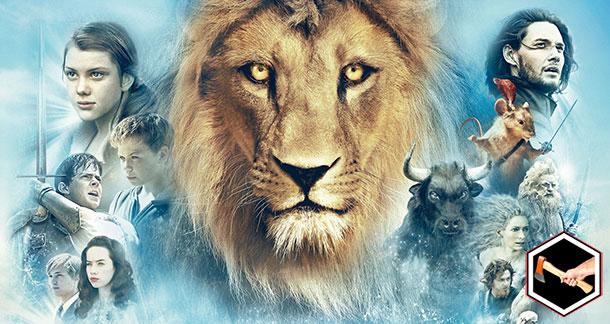 Forget J.F.K., the grassy knoll, and any conspiracies theories you were planning to debunk this month, because November 22nd marks the 50th anniversary of a much bigger tragedy: the death of C.S. Lewis, author of the classic children's series, The Chronicles of Narnia. Clive Staples Lewis (or "Jack" as his old buddy John Ronald Reuel called him, another spooky J.F.K. parallel) was one of the most influential English writers of the 20th century. To celebrate the man's life 50 years after his death, to celebrate his 115th birthday (Nov. 29), to celebrate all that is awesome about C.S. Lewis, I'm culling not one, not two, not three, not...six, but seven! seven entire novels for you! Get ready for a mini-Masters class on fantasy classics.

Where do I even begin? No, seriously, where do I begin? The Chronicles of Narnia were published in the order I listed above, but chronologically the books would be listed 5, 1, 6, 2, 3, 4, 7. This is actually a major point of contention for people who contend points, but for our purposes we're going with publication order.

Oh, but it's good fluff and nonsense. The Chronicles of Narnia detail the entire history of the magical world of Narnia as seen through the eyes of a handful of British schoolchildren. In the first book, four siblings discover this enchanted land through a portal in a musty old wardrobe. At this point, Narnia is under the thrall of the White Witch, who has made it so that it is always winter but never Christmas. The four children set out to free Narnia and the Talking Beasts and all other manner of magical folk who live there from the witch's spell with the help of the Great Lion Aslan. It's all very allegorical, but in a way that isn't annoying unless someone wants to talk to you about how allegorical it all is.

In each of the subsequent books, some or all of the four siblings are brought back to Narnia from England to help in various quests and voyages. There's a book about deposing a usurper king, a book about sailing to the edge of the world, a book about crossing a desert and saving a kingdom, a book about rescuing a kidnapped prince: it's quite a diverse bunch of stories for such a seemingly simple formula (British kid + Narnia = adventure).

Do you happen to be a fan of joy? How about smiling? Fanciful storytelling? Good triumphing over evil? Good and evil even being a thing at all? C.S. Lewis was an incredibly intelligent man and an amazing writer, and for these being the only children's books he ever wrote, they're pretty fantastic. (And they were published in 7 consecutive years! Take that, Jo Rowling.) His writing style is very brusque; he never says more than he needs to in order to describe a scene or get a character from one point to another. Instead, he lets the reader fill in his or her own details. Take the opening two lines of The Lion, the Witch and the Wardrobe, for example:

Once there were four children whose names were Peter, Susan, Edmund and Lucy. This story is about something that happened to them when they were sent away from London during the war because of the air-raids.

Bam. We know who the characters are and why they're in an unfamiliar location in just two sentences. (Speaking of opening lines, The Voyage of the Dawn Treader has one of the best ever: "There was a boy called Eustace Clarence Scrubb, and he almost deserved it.") Somehow even through this sparseness, though, Lewis conveys lush images with such magic and color that it's hard to believe that the books are each only about 200 pages. How does he fit so much in? (Hint: Pauline Baynes' gorgeous illustrations help.)

But the content is incredible, too. The stories, the characters... Everything within the books feels special and purposeful. There are no throwaway lines or cheesy references. Each word has a job to do, each Faun and Bear and Giant introduced for a reason, each side plot and line of dialogue meaningful; it all ties into a mystical series of interwoven metaphors pulling from all parts of the globe and history. There are references to Greek and Middle Eastern gods and traditions, Christian allegories and symbols, and British life and customs, but none of it is bashed over the reader's head. Is Aslan meant to represent Jesus? Maybe. Does it matter? Not at all. The stories are compelling and well told, and all that other nonsense can be left for the scholars.

A bigger problem is the psuedo-racism that accompanies the Calormenes...[who] are obviously Middle Eastern standins.

Remember back when we culled The Jungle Books and couldn't exactly get around the fact that Rudyard Kipling was a diehard imperialist and kinda super racist? Well, C.S. Lewis isn't as bad as all that, but a lot of his representations of what's "right" and "wrong" are a bit dated. For example, boys are meant to do "boy things" and girls are meant to do "girl things," and that's just how the world is, right? Not that girls aren't clever or useful; they just can't do what boys can do. It isn't something that's overt or distasteful, but there's a very 1950s undercurrent of, "Well, look, but she has a bow and arrow, so that's good enough, right?" It's fine. There are issues in the later books about Susan being too interested in "nylons and lipstick and invitations," but it's fine. Although, Lucy is the most developed and engaging character in the series, and she and Susan do fight battles and engage in more "boy" activities than the boys engage in "girl" activities. It's complicated.

A bigger problem is the psuedo-racism that accompanies the Calormenes, the residents of Calormen, a country to the south of Narnia. The Calormenes are obviously Middle Eastern standins: they wear turbans and live near a desert and talk about spices and fight with scimitars, and it's generally a bit too on the nose. The Calormenes are depicted as treacherous and slovenly and cruel, nothing at all like the fair-haired Narnians who inhabit the forests and fields to the north.

There's also the fact that, yes, basically everything that happens has some type of religious significance. Lewis was a devout Christian and lay theologian, so he knew a lot about religion and much of that knowledge seeped into his work. Arguments have been made that Aslan is a bit too Jesus-y and the overall tone of the books too Christian in general, even though Lewis asserted that none of that was done specifically for Christian Purposes.

Oh, and in two of the three books where he appears, Eustace Clarence Scrubb is an annoying little turd.

To be honest, the question has never been whether you should read these books, because you should read these books. The question was how many of these books should you read? Just a few? All of them? And in what order? I suggest reading all of them, and in publication order. There's nothing actually gained by going through chronologically (which is what I did on this most recent read), and it actually is a bit jarring tonally. While the events in The Magician's Nephew technically occur first, the narrator in that book makes frequent allusions to other events and characters from the series and to Narnia itself before they naturally come up in the story. Things get even weirder when you're forced to read The Silver Chair and The Last Battle back to back, the worst book followed by the best, because by the time you start TLB you're probably sick of Eustace and his buddy Jill Pole and not prepared for how awesome they're about to be. It's a strange jump thematically. Speaking of The Last Battle...

In my excitement, I'm not sure that I've really given sufficient reason to read all seven of these books, but there is a reason: The Last Battle. The final book in The Chronicles of Narnia is one of the most complete novels of any genre or difficulty/age group I've ever read. It's exciting and powerful and beautiful and emotional, and there are so many different themes and concepts playing against each other, big concepts, like Important Life Question concepts. And if you only read The Lion, the Witch and the Wardrobe and The Last Battle you'd probably be okay—you'd be a bit confused about who some of the characters are, but you'd be okay—but you wouldn't, because it's such a fulfilling climax not only to a series of stories, but to the life of an entire mythical world. Also, The Voyage of the Dawn Treader is close to perfect, too, so you'd miss that. But The Last Battle, seriously, life changing. It has to be one of my top five favorite books ever, and it's so much fuller when it's enriched with the flavor of the other six books. Read these books. Read them to your children, or your girlfriend, or your husband, or an elderly relative, or by yourself in a comfy chair in the corner of your living room, ready to take in the magic of Narnia. I'm getting emotional. Read these.