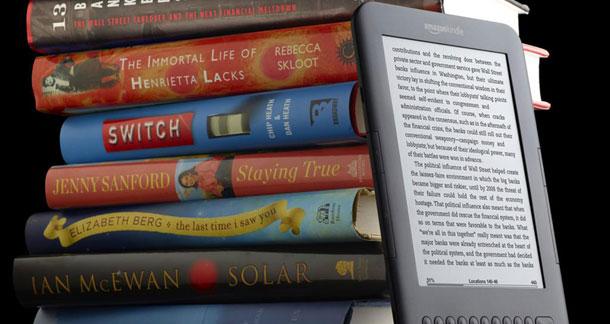 Amazon and the Kindle have done a number on the publishing industry. As the New York Times pointed out in October, Amazon now has a hand in every single aspect of the business, making insiders nervous that they could, in fact, entirely change the way people come in contact with and consume books. Up until recently, there's still been a hallowed, yet stumbling, space where books-- actual paper ones, edited by actual editors and manufactured by actual manufacturers-- have reigned supreme: the library. And now the Kindle has moved in there, too. But what if the Kindle and other eReaders and tablets could do for libraries what they've done for reading and book consumption in general-- give them a huge a shot in the arm?

It's still too soon to tell. Just two months ago, the Kindle quietly entered the hushed domain of the local library, with the Beta launch of their new eBook check-out system. Now the system is available in over 11,000 libraries across the country.

Functioning pretty much like getting an actual book from the library, the system allows Kindle users to browse online, then select and check-out books they want. Then, before the book is due back, Amazon sends a polite message reminding the user to renew it online or the book will go away. If the user doesn't choose to renew the book, it is simply removed from the user's Kindle. However, all of the user's notes are still synced and saved online. The books also offer public notes, so readers can see what other readers have said, like a less cool version of swapping a book with notes in the margins.

The new feature, which requires a third-party book-lending application called Overdrive, is still slightly cumbersome and clunky, taking more steps than buying an eBook from Amazon itself. But part of that is due to the fact that users have to actually use the online search website for their library-- which, in terms of web metrics for the library, is a good thing. But it also means that the user has to spend a little more time looking, clicking, and selecting options.

Bringing the Kindle and public libraries together immediately raises questions among die-hard book lovers about what this means for the age old institutions... and for printed books. But to be honest, this may be a case of "if you can't beat 'em, join 'em." Digging in against eBooks, and creating a divide between "book people" and "eBook" people is a good way for libraries and bookstores to get left in the dust. Instead, allowing eBooks and libraries to co-exist may be the answer to saving the cherished experience of the library. Especially because it doesn't look like Amazon's looking to oust tangible reading material in favor of rows of empty shelves any time soon. The Kindle's public library feature is in addition to another paid feature that Amazon offers for book borrowing through their own store, so the move to incorporate libraries seems like a thoughtful gesture in favor of accessibility.

Libraries may even stand to benefit from the Kindle user's presence; it seems that because Kindle users looking for a loaner book are being directed to the actual websites of their local libraries, that they may be more likely to stay abreast of events going on, such as book readings. And because additional funding for most libraries comes through voters' decisions, and is only marginally based on how many actually attend a library, that means if fewer people are walking through the door but see the library as a resource, the public library system may still see an increase in funding. Of course, this is all conjecture, but the addition of the Kindle to the library system hardly looks like a nail in the coffin.

The eBook's clout in the publishing and bookselling industry is tough to ignore, and for the most part, it's making books more accessible for consumers-- despite the fact that those consumers had to pay for the platform. But if the use of eBooks can potentially help those who can only access books through free public means, there's certainly a chance that there's room for everyone at the library.