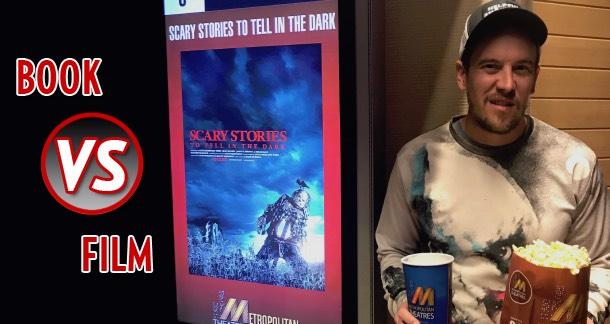 The Scary Stories to Tell in the Dark books were the highlight of the Scholastic Book Fair. Bless you, Scholastic, for sneaking in a book that depicted a woman with spiders exploding out of her face. Bless you for tricking my mom into thinking these stories of people eating sausage made from humans were remotely appropriate. Scholastic, you once sold me a book I can only describe as a sub-Go-Bots-quality Transformers knockoff, but I forgive you.

The Scary Stories to Tell in the Dark movie adaptation, which has been rumored for something like a decade now, finally came out this weekend. How was it? 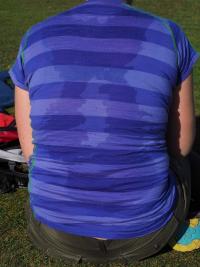 Before you read the rest of this review, a brief disclaimer: I was mildly intoxicated at the movie. I had a couple beers. And some bourbon. This is significantly more than I could drink when I read these books as a kid under the covers with a flashlight. Also, I never read under the covers with a flashlight. My breath was repulsive and suffocating. And I never did the flashlight thing because my parents didn’t get all pissy about READING, even if it was at 8:30 PM. Seriously, some parents would stop their kid from creating cold fusion if it happened after 9 PM.

Scary Stories to Tell in the Dark played in a “Luxe” theater. This means that you can have Buncha Crunch that was refrigerated, booze, and assigned seating in reclining chairs. To be fair, booze was available in theaters since the invention of the pocket. So I guess “Luxe” means you can get drunk while wearing bicycle shorts.

Luxe also means you get assigned seats, which is good and bad. Good because you can pick where you sit ahead of time, bad because when someone is occupying your seat, you have to decide whether or not to ask them to move. I wouldn’t bother, except that if I sit in the wrong seat, then someone comes along who bought my new seat, then I have to move and ask someone else to move anyway. It turns seeing a movie into an episode of Curb Your Enthusiasm. But eventually, after politely-as-possible telling someone that E and F are different letters, I sat down in a body-warmed chair, which is gross. Electronic seat-warmers in the car? Luxury. A stranger warming up a chair (to an alarming degree) with her body? Not as luxurious.

Everything good about it is lifted straight from the books, and everything that’s not from the books is a waste of time. I closed my eyes for portions, imagining that every human’s eye has a limited number of usage hours, and I didn’t want to waste mine on this nonsense.

From the books, we got a scarycrow (combo of “scarecrow” and “scary” that I just invented), a gross version of "The Toe," a lackluster story of spiders hatching from a woman’s face (kinda gross, but it wasn’t juicy at all. Where’s the pus? Where’s the blood?), a weird woman, filmed terribly, and a man who may have been scary if he wasn’t entirely made out of computer.

What’s from outside the book?

A group of kids goes trick-or-treating and tricks the asshole jock with a flaming bag of shit. Mildly charming, but the kids in this movie are really outdone by the casts from Stranger Things and the IT reboot. The last few years have been an embarrassment of riches when it comes to fun groups of kids in horror, and the Scary Stories group feels a little watery, a little bland. We've got the standard kids: funny kid, straight man set to die immediately, girl who has no real traits other than being a girl, and a Latino boy, Ramon.

Which, let’s get to that. Ramon is rolling through town, and we’re introduced to him as he’s hassled by the Sheriff, who all but runs him out of town, Rambo-style for no reason. I think the only reason this kid’s Latino is so that we can show that the bad guys in the movie (jock asshole, sheriff) are bad. We already know they're bad, but just in case you didn't get the message from their stock bad guy behavior, they throw a little racism in there. The movie includes a racial element but has absolutely nothing to say about it.

But that's not all. The movie dabbles in about a dozen different “issues," trying them on and discarding them like a female protagonist tries on outfits in a romcom "going out" montage. We've got:

1. The war in Vietnam
2. The draft
3. The election of Richard Nixon
4. Kids blaming themselves for their parents leaving
5. Corporate greed
6. Bullying
7. Being ashamed of a family member because they’re “different” (one of the kids says the line “They just did this to her because she was different!” aloud)

Sometimes a movie adds in an element of reality, and it enhances the story to have it going on in the backdrop and/or interrupting the foreground action. It didn’t work in Scary Stories because we never stuck with any issue long enough to make an impact, and they don't make any parallels with the main story.

This movie’s attempts at including relevant issues make The Purge look like savvy political commentary. They make Tucker and Dale Versus Evil look like Hillbilly Elegy.

The story couldn’t be more color-by-numbers if it was a felt poster of animals and rainbows you bought from Hobby Lobby.

The irony is rich in that the characters go to a drive-in, and the movie on the screen? Night of the Living Dead! A horror movie that in 1968 featured a black protagonist and had the guts to actually talk about race in a horror context. The race issues made that movie better. George Romero had courage in 1968, and it’s no coincidence that the results were better for it.

Scary Stories wants to do social issues so badly, and it tries to do them tapas-style. A little of this, a little of that, but never enough of anything. No commitment.

Outside the social issues, the story couldn’t be more color-by-numbers if it was a felt poster of animals and rainbows you bought from Hobby Lobby.

There’s a half-assed romance between our main character (Girl) and Ramon, which is the least important and least necessary part of the entire movie.

There’s a scene where we watch kids go through microfiche at the library. Because that's ALWAYS a thrilling scene. You know, I’ve never once had a group of teens come into the library where I work and try to find the backstory of some haunted shit. Not once!

There’s the “Oh my god, this woman we thought of as a monster was just misunderstood!”

There’s that whole “This ghost wants us to do something, but can’t tell us directly in a way that we understand, so we’ll just try a bunch of shit to appease her and fix this situation.”

The overall problem with the movie is, well, the movie. There are about 5 scary stories lifted straight from the books. Those are the good parts of the movie, and they’re held together by 90 minutes of unnecessary nonsense. It takes a good half hour before anything remotely scary happens. Then we take a break. Then another story comes in. Then we take a break. It's a mediocre horror movie that is briefly interrupted by a much better movie here and there.

With Scary Stories to Tell in the Dark getting the movie treatment, the big question was always this: Would the ghosts, ghouls, and spook-em-ups be as creepy on the screen as they were in the books?

If we look at the images in the books, they’re abstract in a lot of ways. They almost live in a world LIKE ours, but not quite ours. They’re creepy as hell, and a totally underrated achievement in horror. 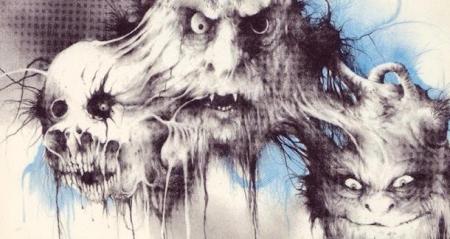 So, what happens when they enter our world?

The filmmakers do a pretty good job replicating some of the images created by Stephen Gammell. But outside those lifted elements, the movie doesn’t have any sort of overall aesthetic. It doesn’t have a visual style, and there’s a stark difference between the Scary Stories portions and the rest of the movie. When the movie is being an adaptation of the books, it looks great. When it tries to be it's own thing, it's almost entirely without visual identity.

There’s something else. I’m an adult. Chronologically, at least give me that. And there’s something, as an adult, creepy about imagining Stephen Gammell creating these images on his own. It’s probably nothing like what I picture, but I picture him in a haunted house with a brush, overtaken by a demon, drinking goat’s blood to stay hydrated and close to satan. Weird, atmospheric music would be playing in the background. Imagine Tool but with more sounds of adulterers screaming in pain. He’s splashing black watercolor paint all over the place, creating in a fugue.

When I think about this as an adult, there’s something disturbing about all of the books' illustrations coming from one person, one mind. When I watch a movie where likely dozens of animators worked on the project, where everything was well-lit and child actors were excused from work at the correctly-appointed time, it kills some of the magic. It feels less taboo, less a singular vision than a commercial product.

Skip it. Seriously. If you feel compelled, get it when it’s on streaming, watch the parts with the scary stuff. You can use the other 90 minutes to comment on this column, thanking me for saving you the time.

The scary stuff is mostly well-realized, but the stuff in between is boring, and there's A LOT OF IT.

I was thinking during the movie, wondering what I would say about it. For the last 45 minutes, someone in the theater was snoring. Loudly. This is an unspoken downside of comfortable, "Luxe" seating that I hadn't considered, and also what I would call accurate commentary: Wake me when something cool happens.

The subject of mathematics for arabian kids is an essential part of our educational system. As soon as a child begins to speak, they are exposed to letters, numbers, and their meanings. These subjects help develop cognitive skills and enhance learning abilities. It is not easy for young children to understand the concept of numbers verbally. This is why math for kids activities should be engaging for the child. Here are some tips to make math for kids fun: