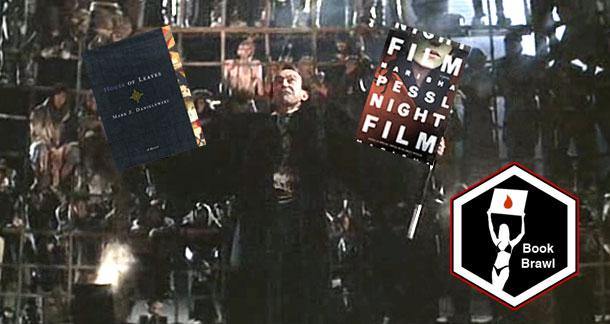 When anything comes along which seems so unusual and unique that it’s beyond imitation, the one thing you can be sure of is that someone will try to imitate it. Or actually, lots of people. And the other thing you can be sure of is that any subsequent work which bears even a passing resemblance to the original will be decried as a pale, inferior simulacrum. Comparisons between Mark Z. Danielewski’s seminal House of Leaves and Marisha Pessl’s Night Film have already been drawn, usually to the detriment of Pessl’s work. But are those judgments fair or justified? The only way to be sure is to put the two of them in the ring together and let them Book Brawl it out!

Round One: The Literary Chops

Let’s start at the top and work our way down. When it comes to the ‘lit’ factor, which of the two would you be most likely to brag about having on your bookshelf?

House of Leaves has a structure of a complexity which would make M.C. Escher weep tears of envy. It’s a story within a story within a story: a drug-addicted tattoo artist discovers a manuscript written by a blind academic about a film made about a family living in a paranormally-afflicted house. Night Film on the other hand, which concerns the attempts of an investigative journalist to get to the bottom of the suicide of a reclusive filmmaker’s daughter, never once strays from the traditional gumshoe format of first person narrator, single point of view.

Round One goes to... House of Leaves!

'House of Leaves' has a structure of a complexity which would make M.C. Escher weep tears of envy.

Round Two: The Cool Stuff

Both novels can lay claim to the epistolary technique — using extracts from what appear to be real documents as narrative devices. House of Leaves includes, for example, diary extracts, transcripts and research documents, while Night Film boasts a whole Time article about the infamous director Cordova, whose films have inspired a cultish following, as well as extracts from websites, photos and journals. Night Film, in a touch of interactive street-cred, also includes a downloadable app, which the reader can use to scan symbols in the book and release more goodies. For example: I found an audio excerpt from a mock ‘True Crime’ documentary with mine.

House of Leaves remained depressingly silent when I waved my phone over it — no apps there — but does that mean Night Film wins the round?

No. House of Leaves is not only epistolary, it’s ergodic – manipulating the text to achieve literary effects. Just as vegans are always morally superior, ergodic books always get an extra lit-point.

Round Two is a draw – one point each

Round Three – The Scares

Both books are billed as horror, although House of Leaves is so multi-layered it doesn’t fit easily on any shelf (Mark Danielewski is on record as calling it a love story). Night Film does fit the horror bill more readily – weaving in elements of black magic, Cordova’s psychologically disturbing movies (think Hitchcock but weirder) and setting the climax amongst the now-deserted sets still standing in the film-maker’s vast and spooky rural retreat.

But Night Film, while intriguing, lacks emotional power. Apart from the reputation of Scott McGrath, the journalist digging into Cordova’s background, there isn’t a whole lot at stake. In House of Leaves almost everyone involved in the story risks death, or if they are lucky, a lifetime in a rubber room holding conversations with invisible anteaters called Bertie. House of Leaves also contains conceptual mindfucks which would wring yet more tears from M.C. Escher — endless stairways, dimensional improbabilities, the warping of space and time — as well as all the ergodic stuff.

Round Three – House of Leaves wins again!  Now in the lead 3-1. It’s not looking good for Night Film…

Round Four – The Lovely Words

Sadly, looking at the prose won’t help Night Film back into the race. House of Leaves isn’t just a well written book, it’s a really well written book. Danielewski nails the tone of each of his separate story-telling devices, even succeeding in giving life to characters who only ever appear at a distance — through the transcript of a movie, or in someone else’s journals. This is no mean feat.

As for Night Film, characters smile wanly, eye each other sharply and scatter their dialogue with italicization so random I started to think it conveyed a hidden message (I checked. It doesn’t).

Round Four – House of Leaves wins. Minus one point to Night Film for the adverbs. The score is now 4-0

Round Five – But which one is more fun to read?

OK, let’s cut Night Film a little slack and ask the obvious question. Night Film might be potboilerish in tone and conception, but it’s also ferociously detailed and meticulously plotted. House of Leaves is challenging and provocative, but it’s also confusing and exhausting. In pure storytelling-enjoyment terms, Night Film wins, hands down.

Which seems the only fair conclusion, because as I hinted in my opening, trying to compare Night Film and House of Leaves is like choosing apples over oranges as Number One Fruit. Both have their strengths and both have weaknesses, and whichever wins this particular brawl depends on whether you are looking for a challenge — in which case the victor is House of Leaves — or whether you simply want a good old-fashioned ripping yarn — in which case Night Film is the book for you.

Juice Ica from Rhode Island is reading The Twelve by Justin Cronin & Beautiful Creatures November 22, 2013 - 10:00am

I've never read Night Film but loved House of Leaves though it's been about a million years since I read House of Leaves. This article makes me want to re-read it (a tedious but exciting task indeed) as well as pick up a copy of Night Film to check it out! Great book brawl. Very Fair!

Joshua Chaplinsky from New York is reading a lot more during the quarantine November 22, 2013 - 10:27am

Yeah, any time something is a little different it gets compared to House of Leaves. Not really appropriate in this case. But despite the adverbs, italics, and that Dan Brownish thing she does where every chapter has to be a mini cliffhanger, I can't remember the last book that had me staying up till the wee hours because I couldn't put it down.

The italicization bothered me so much in Night Film, mostly because the emphasis was on the wrong words.  Still a decent read though.