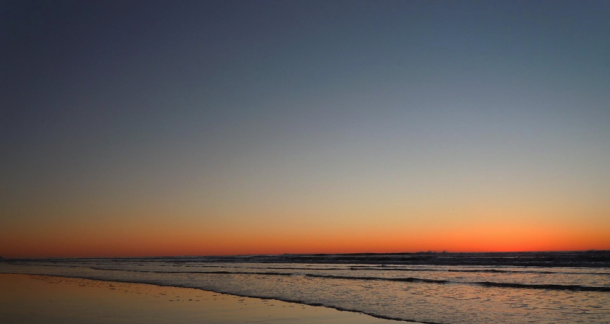 At a flash fiction class at The Attic in Portland, OR, poet/screenwriter/overall godhead David Ciminello led us through prompts. He creates trust through guidelines on how to receive and give feedback (example: “Be prepared to ask for the kind of feedback you want”) and his easygoing demeanor, but this night, I was wary. Directed writing makes me feel uneasy, as if a “real” writer doesn’t need external motivation. But I loved these prompts. They let the judgmental side of your brain (which in me is a gale force) focus on following the rules (or objecting to the rules) while letting the creative side flow.

He handed out slips of paper on which were written places. I got a beach to describe without naming. I chose a beach in Seaview, WA, which allows cars to drive on it. This exercise reduces risk when you share, because people are guessing—not focused on whether the writing is “good” or not. Because we wrote on paper, I could obsessively doodle before starting to write—another meditative gift to your brain. So: a time limit, a prompt, a quiet room, paper, pen, and a guessing game at the end. (Note: here I’m sharing actual drafts knowing that drafts are a little chilly, right? A little “needs to improve,” eh? But that’s part of it.)

(Round one: first doodling on page ... I draw circles and other rectangular shapes, bisect them, and color them in.)

The sand is coarse and cold at night. Only Bones of desiccated crabs lie pressed under into and crushed tire tracks that extend for miles, only visible during lightning flares. Thunder follows, opening up a place between water full of salt and air full of water—endless ions bursting and shuddering.

(OK, sigh.) Next, David told us to make the setting into a character. We could choose the voice. He says of this exercise, “Usually the results are magical.”

(Round two: more doodling ... I feel more of an emotional tug toward the beach than before.)

Your sand is coarse and cold when the sun is gone. leaves. You hold bones of desiccated crabs pressed into and crushed into zigzag tire tracks that course over your body for miles. You can’t express the pain, but the pain is visible during lightning flares. Thunder follows, deafening you, opening up a space between water of salt and fish and air of water and wind—ions bursting and shuddering.

This would have stayed as an exercise in one of dozens of notebooks, but David gave us another assignment for a “mini flash fiction novel” of seven paragraphs, 600 words max. Guidelines: There has to be a secret in it. Each paragraph has a different requirement. David also wrote in a handout: “Of course [a story has a] theme (What is the piece about?—the emotional undertow, I like to call it—or the ‘spine’ of the story upon which everything rests); character, style (voice), etc.”

(Round 3: I wrote the flash novel “Angel Dust.” The setting, which started as a class guessing game, was altered slightly to fit into the story; the sister in the first paragraph becomes the bone fragments at the beach (part 5 in the assignment, which I later put at the end). I also added another paragraph. One rule of writing classes: you can change the prompt.)

I.
Gib holds his pee and doesn’t laugh when one kid stutters on the rug. He tries to swallow mustard-flavored meat. Aiden calls him short. That is first grade.

Third grade. Gib comes home and cries about the bullying. Shrimp Little Dinky. He wants to kick things, but his sister strokes his hair, says no. He spits on the bed through the sheets, drooling hate in watermelon and peanut butter.

II.
I pound on the cab’s steering wheel. Sarah digs a pencil into her leg. She wants to know me because she’s tasted me.

III.
My sister Liza, now dead, never teased me for playing with a stick. Oak. Maple. Hickory. The stick had a name, transferred to others as they broke in snake or gopher holes, or were tossed off the overpass. Liza, the orange lollipop, knew the stick’s name.

How can I tell my girlfriend the secret name, her breath frosting the window, when she fears me?

IV.
Their father, a career NSA spy, slaps hellos. Belts goodbyes. Seven is too many. They start dying. Anorexia takes the first one, Liza. Six left.

This burger is the best comfort food. Radio off!

Gib’s girlfriend pays for cab repairs. Gib has a long tongue. He says he once gave a ride to Idi Amin. He sold drugs to hookers. He got robbed in Anacostia. He tells his girlfriend he knew the color of his boss’s sheets. Lies tumble from his mouth, now with all his teeth, then with fewer.

V.
“I had to wipe my nose twenty times in each class. I sniffled a hundred more. I coughed a lot.”

“Does that mean you want to sleep with me?”

“Turn off the flashlight.”

“Look at the shadows.”

“Are there fairies in-between the slats of the blinds?”

“Sure. One of them is Liza, watching you.”

VI.
I unplug the TV but the sound keeps going: Leave the jokes to me, Chuckles.

I have pot sex with Sarah. The one who smells like my dead candy sister. And I have Dilaudid sex with him. We spatter blood on the aquarium and on the walls. Cockroaches descend into Pepsi bottles. Is this love?

Oh, another wrinkle cream with no urgency in making any change happen whatsoever.

I tie up my German shepherd outside the gay bathhouse on St. Mark’s Place.

It’s better to give than to receive.

“Are you upset about the violence?” my remaining sister asks her son.

“Maybe not so good here.”

My nephew shuts off his iPad.

I am the host. My skin yellowed by hep C. No one was supposed to know. My nephew sips a Frappuccino, tonguing sugary goo.

No one hands me a stick to caress as a guide toward death. Neither oak, nor maple, nor hickory.

VIII.
The sand cools when the storm comes. Translucent insects flatten to survive. I hold bones of desiccated crabs pressed into tire tracks that course over me. I can’t express pain, but it is visible during lightning flares. Thunder follows, deafening. It opens a space between the water below—of salt, fish, and bone fragments from an anorexic—and the air tumid with water and wind. Ions shudder.

I’m not sure people are used to reading experimental fiction, although this one seems easy to follow. There are gaps, but I tried to include strong images, such as “Lies tumbled from his mouth, now with all his teeth, now with fewer: who would care?” “Angel Dust” appears in my book and on the cool website The Gravity of the Thing.

When I teach at Portland high schools, I include space for students to doodle and tell them they can change the prompt if they don’t like it. My son is an extremely reluctant writer, so I know it’s tough! Lynda Barry, who wrote the fantastic book Syllabus, said a teacher in college inspired her to keep a notebook, “She showed me ways of using these simple things — our hands, a pen, and some paper — as both a navigation and expedition device, one that could reliably carry me into my past, deeper into my present, or farther into a place I have come to call ‘the image world’ — a place we all know, even if we don’t notice this knowing until someone reminds us of its ever-present existence.” I use photocopied packets when I teach, but this fall I want to switch to composition notebooks to allow more space for doodling, writing large, writing sideways, or whatever students want. In high schools, writing gets reduced to a grading rubric, but I like to disrupt that through shared writing, reading sentence strips of other students’ writing, and time for writing that stays mostly private but might lead to something tangible in the future—maybe in a story, a rap, a meme, a tag, a love letter, or art.