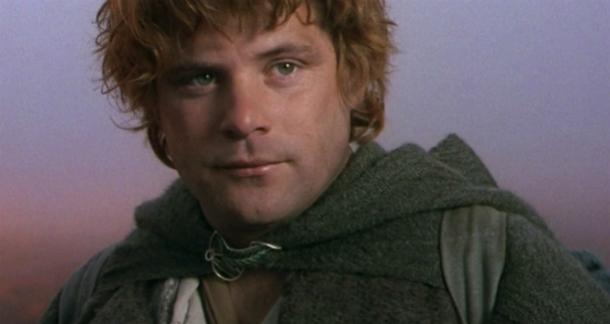 Still, I wonder if we shall ever be put into songs or tales. We’re in one, of course; but I mean: put into words, you know, told by the fireside, or read out of a great big book with red and black letters, years and years afterwards.

– Samwise Gamgee, The Two Towers, The Lord of the Rings, J.R.R. Tolkien

Samwise Gamgee, Sam, Son of Hamfast, Samwise Gardner, Samwise the Brave, Mayor of the Shire. Tomorrow, April 6, we celebrate his birthday, but really, any day is the right day to celebrate Sam. This funny, unassuming hobbit, who before his great adventure had never been outside of The Shire, manages to rescue the Ringbearer and save the whole world though the quietest and loveliest of ways: friendship, loyalty, and a stubborn determination to get back to his little garden.

When Sam’s caught eavesdropping on Gandalf the Grey as he gives poor Frodo Baggins his terrible assignment – leave the comfort of his home and travel a dangerous road with Middle-earth’s deadliest object, the One Ring sought after by The Dark Lord Sauron – Gandalf decides to “punish” Sam by insisting he accompany Frodo on the journey. Of course, what we’ll soon learn about Sam is that Gandalf couldn’t have kept him from Frodo if he’d tried, because protecting Frodo Baggins is the truest aim of Sam’s stout, generous heart. Everyone, from Elves to the future king Aragorn, tells Sam to stick with Frodo, but they needn’t have bothered.

Everyone, from Elves to the future king Aragorn, tells Sam to stick with Frodo, but they needn’t have bothered.

“Don’t you leave him! they said to me. Leave him! I said. I never mean to. I am going with him, if he climbs to the Moon; and if any of those Black Riders try to stop him, they’ll have Sam Gamgee to reckon with, I said. They laughed.”

Over the course of this quest, Sam proves on countless occasions that reckoning with him is nothing to laugh at, and certainly not when he’s defending his best friend. He fights Black Riders, Orcs, warriors, Shelob the Great Spider and the deceitful Gollum to save Frodo, and he won’t be turned away from the charge – not even when Frodo himself tries to leave Sam on the shore of Nen Hithoel, not “even when [Frodo] is summoned to a secret council and [Sam is] not.”

Here’s what we know about Sam from the outset: he loves to eat and smoke and drink and garden. He’s affectionate toward ponies and his friends, and he harbors a secret yearning for the pretty Rosie Cotton. Like all hobbits, Sam seems simple, straightforward, uninterested in adventure. But like many hobbits, he has a great capacity for surprise, a sneaky depth soon shown in his love of poetry, his fascination with the Elves, the unthinking way he crashes into danger again and again to protect his friends. He manages to surprise Frodo as much as anyone: “I am learning a lot about Sam Gamgee on this journey. First he was a conspirator, now he’s a jester. He’ll end up by becoming a wizard – or a warrior!”

“‘I hope not,” said Sam. ‘I don’t want to be neither!’” And maybe that’s what makes him so uniquely suited to the task of protecting the Ringbearer: Sam doesn’t want any glory for himself. He has no interest in the ring, he blushes at any compliment, he wants songs written about his dear Frodo but laughs off the idea that any could, or should, be written about him.

His heart is vast, selfless and uncompromising, and his courage dauntless. Samwise Gamgee is a character of such steadfast integrity that he feels more necessary in 2019 than ever before. In the intro to the 1973 edition of The Lord of the Rings, author Peter S. Beagle (who created his own classic fantasy realm with The Last Unicorn) wrote that Tolkien’s story provides readers “a green alternative to each day’s madness here in a poisoned world.” It’s a beautiful turn of phrase to describe Middle-earth, a green place of respite that, in spite of the darkness that threatens it, remains a world of unassailable right and wrong, of goodness that eventually overtakes the bad.

But it’s also a way to describe Samwise the Brave, whose purity of conscience offers an indispensable alternative to the greed and corruption we face each day in this poisoned world. And it’s even a sound description of Sean Astin’s performance as Sam in Peter Jackson’s The Lord of the Rings trilogy. It’s rare that audiences of any generation are given a performance so utterly bereft of irony, so true and wholesome and wonderfully uncool. On the page or screen, Sam is a gift we can return to any time we need to remind ourselves that kindness matters, that courage is rewarded, that friendship can see us through the darkest path.

There, peeping among the cloud-wrack above a dark tor high up in the mountains, Sam saw a white star twinkle for a while. The beauty of it smote his heart, as he looked up out of the forsaken land, and hope returned to him. For like a shaft, clear and cold, the thought pierced him that in the end the Shadow was only a small and passing thing: there was light and high beauty for ever beyond its reach.

Sam is a lover of beauty, and he’s endowed with more than his fair share of hope, even when the journey looks increasingly bleak. These two simple, lovely traits – beauty and hope – are as crucial to the destruction of Sauron as some of Sam’s more traditionally heroic qualities, like his bravery and determination. When the road to Mordor is at its most forlorn, when he and Frodo are beyond Cirith Ungol and the worst of their battles are behind them, but coldness and despair lie ahead, the remainder of their journey requires something beyond strength, or at least a different kind of strength: it requires the strength of hope, rather than the strength of combat. While it turns out Sam has both, it’s the former that makes him special, so different from any other hero of legend.

The ways of Gandalf are secretive, and the destiny of the One Ring has always been shrouded in mystery. But maybe Frodo was fated to be the Ringbearer not because he was the best person to carry the ring, but because Sam was the best person to carry Frodo. The love he shows his best friend, over and over, as Frodo toils under the weight of the ring, carries them through every obstacle and keeps them safe against every peril. In the end, it’s Sam’s love that gives him “some gift of final strength,” to know that if he can’t carry the ring for Frodo, “I can carry you and it as well.” He carries them both to the edge of Mount Doom, to “the end of all things,” to where the Ring is destroyed through Gollum’s treachery, after both Frodo and Sam showed him mercy.

Think on that: at the end of all things, it isn’t valor or strength or swordsmanship that saves Middle-earth. It’s mercy, and it’s friendship – two notions that The Dark Lord could never understand and therefore never fight. That’s the “green alternative to each day’s madness here in a poisoned world” that we need as much now as ever before. What Sam taught us back in 1955 and still teaches us today is that we can’t fight hatred with hatred. We fight it with friendship, with mercy, with hope, and with beauty so powerful it smites the heart.