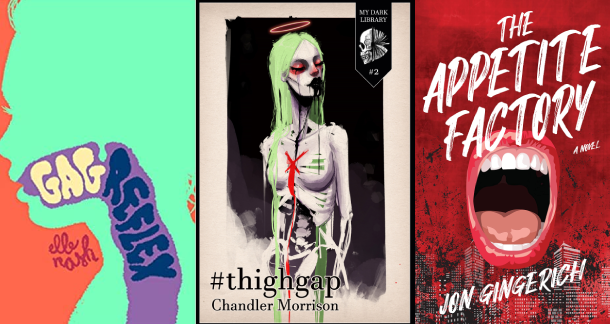 I’m not sure if I was ever actually anorexic— luckily, I snapped out of it before a diagnosis—but there was that one summer of 1990 where I was trying to make my body disappear, parallel to the way other kids might run away from home. However, those kids would eventually get hungry and return to their family’s regimented dining room table, and I wasn’t satisfied until my bones began to protrude from my skin.

It was middle school, where I often fought, physically, for my life, against a whirlwind of fists attached to skinny wrists. I had developed and perhaps stalled, into a bodyweight unacceptable to Southern California yearbooks. I stopped being afraid of fighting, which was good; the bad news was that I’d fixate on the gangly arms I was being pummeled by—so thin I swore I could break them. There was fierce confidence inherent in their sleek bodies, and I knew I needed that morale even if it killed me. Undistracted by ambush once summer hit, I would starve myself for days, chewing on ice for a snack, bolstered by a righteous sense of protest like the Tibetan monks I saw on T-shirts, engulfed in flames; my cheekbones, my rib cage, my wrists, and fingers and legs became so skeletal, it’s like my flesh just burned away.

It was eighth grade when I returned to school that fall, and I was suddenly popular; a celebrated oddity with the new malnourished make-over I achieved by any means necessary. I was an overnight magnetic, though some were intimidated by me: a pale, freakish stickman presence beneath a nest of wild dyed blue-black hair—now the cruel eyes were all mine, acquiring the protective wisdom of just look like you’re fucking crazy, act like you’re insane. But my mystique would take no effort—when you’ve given in to an eating disorder, your reflection of the world is warped as a funhouse mirror and you react as such. 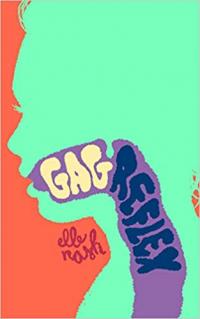 If I hadn’t eventually discovered marijuana and learned to embrace a growing boy's appetite, I wonder how far I would have taken it? A decade later, in the early days of the Internet, I could have been commiserating in online chat rooms with the contrarian support of pro-ana culture. This is the blueprint played true to faith in Elle Nash’s Gag Reflex (CLASH Books), not a novel but a livejournal, as Nash refers to it. We assume we know this kind of work considering Dennis Cooper’s the Sluts or Amygdalatropolis by B.R. Yeager, but Gag Reflex is perhaps even more daring by its literal recreation of the online messaging schematic, offering a deeper immersion that tempts you to forget you’re even reading a book.

Nash’s third book is perhaps her most alienating, yet she makes it clear right from the dedication who she had to write for, first: this is for me, my younger self, and for my pain; and when one writes about alienation, inclusivity is often the last thing on our minds. Conversely, nothing is held back here—reading Gag Reflex is impulsive as finding someone’s diary, nothing in these entries is left to the imagination; you might even feel bad for reading it. But guilt is the active ingredient here when following Lucy (really, we become Lucy) through every step forward, two steps back of binging/purging alongside private hunger strikes. Lucy insists on blaming herself for every inch gained.

“Eating disorders are very specifically difficult because you need to interact with one of the main triggers of your addiction every single day in order to survive,” Nash recently told The Observer. It’s insight like this that suggest Gag Reflex is a braver, more vulnerable read than whatever drug novels you’ve indulged in where the addict, at least, is rewarded with the euphoria of their vice. Nash reminds us that corners like Lucy’s are far more suffocating, where the only prize is abnegation, self-subtraction; a living nightmare of reduction every time you glance into the mirror.

Mirrors may lie, but not before they can become temporary portals into alternate cautionary death trajectories, as explored by Chandler Morrison in his new novella #thighgap (My Dark Library). Morrison does not compromise, and it's no wonder he chose the coldest paths of the vapid and grotesque to tackle the brittle delusion of anorexia nervosa. Yet, with his portrayal of unlikeable people in the eerily-familiar metro-dystopias that spawn them, a character like Helen Troy is an astonishing trouble doll we find ourselves clinging to, like a death grip on your last matchstick.

A fashion model in rigor mortis Los Angeles, Helen has a secret she wears like a billboard: visibly surrendering to weight-loss chaos and opioid/benzo addiction, her dysmorphia takes the form of a hallucinated slug (her past) and a reflected corpse girl (her future). They warn her, yet distract her, from (her present) decomposition; while industry denizens and bon vivants of Helen’s Babylon not only enable her decay but nearly cheer it on in clipped, detached cynical dialogue of which Morrison is a master from the very first line of the book:

"God, you’re so thin. It’s perfect. You don’t even look like a woman. You look like a little girl." The movie director says this from the bed, his eyes watching me from the Vuarnet sunglasses he’s yet to remove.

#thighgap is somehow deliciously cruel and breathtakingly empathetic— the latter of which Morrison isn’t exactly a poster boy for— yet it works here seamlessly in the drastic contrasts of high stakes. With every malevolent turn, we fall that much more in love with Helen. However, it is Hal, her lecherous narcissistic shrink (who is also a stand-up comedian), who nearly steals the whole show:

“I mean, you threw it all up, though, right?” Hal says. “So, like, what’s the big deal? Crisis averted. You look great. You look slammin’. You’re a smokeshow, babe…” “Oh, Christ, don’t tell me you’re gonna cry again. That’s two sessions in a row.”

Intertwined throughout her decline is the painful reoccurrence of 90s dance-pop hit “The Look" by Roxette, a campy yet strategic touch that makes Helen’s world pop as her stumbling runway. As uncomfortable the subjects Morrison tackles, it’s his wielding of satire that burns it deeper into our conscience; a psychic transfusion of trauma reverberated by canned laughter to assure we are paying attention. In the end, Helen’s gains are her losses and vice-versa tenfold; rendering management, therapy, partners, and the industry itself, obsolete. Fading away, our angel loses so much control that she actually achieves it, whispering the last laugh, reserving the right to close her own curtain. 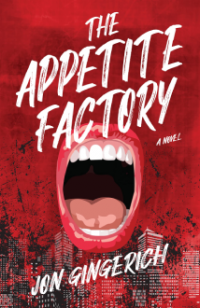 Previously we’ve seen one of Chandler Morrison’s characters bring further disorder to eating; a mode of cruelty to inflict upon others in his 2020 neon-noir novel Along the Path of Torment. The novel’s damaged protagonist Ty Seward forces a succession of women to eat the inedible: Q-Tips, used toilet paper/tissues, and tin foil. In no relation other than its collective conscience prescience, this concept has appeared to sort of ricochet off the cosmos two years later, to land in Leonard Lundell, the focus in Jon Gingerich’s debut novel The Appetite Factory, released last August from Keylight Books.

An embattled public relations agent in Manhattan during the 2008 financial crisis, Lundell has a strange compulsion to eat objects and substances with no nutritional value: detergent, pencils, hand soap, antifreeze, upholstery, and yes, toilet paper. Lundell can afford to dine at some of NYC’s finest restaurants, yet only picks at the expensive meals his obese stalker Patty would die for. He doesn’t truly feast until he’s home, where he sprinkles laundry detergent on whatever canned vegetables he deems a suitable vessel for his advanced tastes. In these private moments of reprieve and catharsis, Lundell slips into swirling introspective exaltation, dissecting the assertive notes and daring flavors to the reader the way a sommelier loves a fine wine:

He scooped the turquoise grounds into the can, gave it a stir, and watched the slurry thicken into an iridescent gravy. The corn was studded with life now, sang with anise and dill, tones so dizzyingly complex he imagined them lying dormant for a millennium, waiting to be uncovered… (he) went straight for the box. Alone, the detergent harbored a simpler composition, an effervescence of cilantro and lime that teased his tongue with earthy chars.

Lundell’s dietary restrictions are so unhinged, he often can’t wait—at the office, he’ll sneak into the bathroom to sample its antiseptics or steal cleaning products off the janitor cart; a quick pump here, a quick spray there when no one is looking. Of course, his obstructionist habits wreak havoc on his anatomy, so between bites he’s popping antacids, in it for the long haul, hooked on these burning bouquets and challenging textures like he’s addicted to the revenue earned from his PR crisis/strategy long con.

Unlike Gag Reflex and #thighgap, which tackle eating disorders more matter of fact, The Appetite Factory uses Lundell’s secret as a broader commentary on our culture’s gradual collapse. We feel more sympathy/empathy with Nash’s Lucy and Morrison’s Helen, whereas with Lundell, we are simply repulsed/repelled, desperately scanning for a grand analogy to make sense of his more absurd cravings for self-destruction.

Yet by the end of Gingerich’s novel, there’s no big reveal other than simple context: the way his mother has become a hoarder to express her depression, the way U.S. Banks are strategically fucking over U.S. consumers to cause their advantageous 2008 crash, the way Lundell’s own company ends up orchestrating crisis to raise the visibility of client’s as he extracts the contents of their wallets. When these American late-stage capitalist habits play out so unsustainably, suddenly Lundell’s suppressed lust for poison makes perfect sense as a glitched byproduct thereof, notwithstanding the expiration of inevitable reflux.

Get Gag Reflex at Bookshop or Amazon

Get #thighgap at Bookshop or Amazon