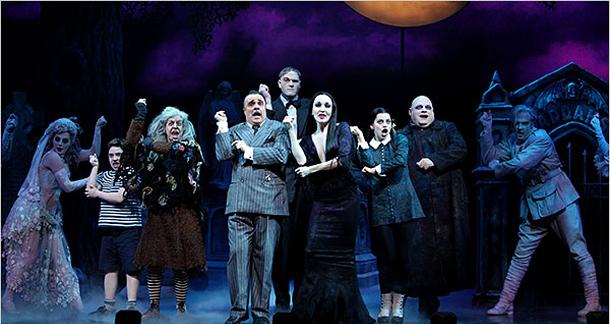 You can make practically anything into a musical, though that doesn't mean you should. Having a degree in literature along with a background in musical theater, I've become intimately familiar with several musicals that were books first. So I am not only a book nerd—I am the book nerd who takes books to her community theater rehearsals, reading and writing during downtime.

The following is a list of some of the most well known and obscure musicals based on novels, novellas, short fiction, comics, and graphic novels. Some of these were Broadway hits, others were big ol’ floppity flops. Check it out and let us know what you think.

This creepy yet lovable cast of characters was created by Charles Addams. The single-panel cartoons debuted in The New Yorker in 1938. The macabre family, which were at the time unnamed, captured hearts and moved through multiple mediums. The TV show and films followed, as well as video games, a pinball game, and novelizations. In 2010, one of my favorite musicals was born. And who doesn’t love Nathan Lane as Gomez? Nobody, that's who.

Stan Lee and Steve Ditko introduced one of the wittiest and most popular comic book heroes in the Marvel universe when they published Amazing Fantasy #15 in 1962. In contrast, the Broadway smash (meaning smash-into-the-wall flop), Spider-Man: Turn Off the Dark, is one of the theatre’s biggest and most expensive bumbles, notorious for injuring at least six Spider-Man actors who all filed suit. Dubbed one of Broadway’s most disaster-prone productions, the music by U2 is not terrible, I guess, but it doesn't feel quite "musical theater" to me. Turn off the Dark is a great concept, if not too ambitious, but it has its die-hard musical-geek fans. I’m not one of them.

This groundbreaking graphic novel by the author of the comic strip Dykes to Watch Out For explores the true account of her complex relationship with her father, an English teacher and funeral home director (the titled "Fun Home"). During her college years, Alison, who has recently come out as a lesbian, discovers that her father is also gay, and that he's had homosexual relationships, sometimes with young men who were minors. Weeks later, her father is killed after stepping in font of an oncoming truck.

The success of the musical is incredible. Fun Home opened on Broadway on April 19, 2015. Since opening, it has been nominated for twelve Tony Awards and won five, including Best Musical. The original cast album was nominated for the Grammy Award for Best Musical Theater Album in 2016. It is the first Broadway show to feature a lesbian protagonist. 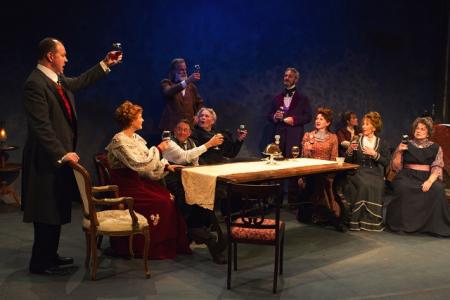 James Joyce included this short work in his collection, Dubliners. It revolves around a university professor named Gabriel Conroy, who is accused at a New Year's Eve party of being a supporter of English political control over Ireland due to the fact that he writes reviews for a conservative newspaper. Even a self-proclaimed theater geek like me must admit I had no idea someone turned this into a musical, titled James Joyce's The Dead (this coming from someone who DID happen to know about Heathers: The Musical, so I guess it's no surprise that this column has been a real learning experience for me). The acclaimed story was adapted into a one-act play, a film, and then a Broadway musical in 1999. The show won a Tony Award for Best Book of a Musical. BONUS FUN FACT: the original production starred Christopher Walken as Gabriel Conroy.

Two novellas, Goodbye to Berlin and Mr. Norris Changes Trains, make up The Berlin Stories, written by Christopher Isherwood. Both stories, set in 1931, portray a time when Hitler was just rising to power. They paint a picture of Berlin in the era of quaint cafes and garish, deliciously sinful nightclubs. Sally Bowles is among the most well-known characters, and is also the female lead in Cabaret, the musical based on the book. I love this musical, and not just because I relate to the young impoverished American novelist looking for love and inspiration, but because it is dark and covers a topic that makes me uncomfortable. It’s not all bright lights and kicklines with half-naked women (though those parts are enjoyable). It portrays a moment in history we should never forget.

I heard of the musical before I ever knew about the book. But Gypsy Rose Lee’s memoir was a New York Times bestseller in 1957. Its most recent (fourth) Broadway revival received three Tony Awards. It is one of the most dazzling autobiographies around, sharp and witty, and depicting the bygone era of vaudeville in its last days. The fame of the classic musical is widely known. 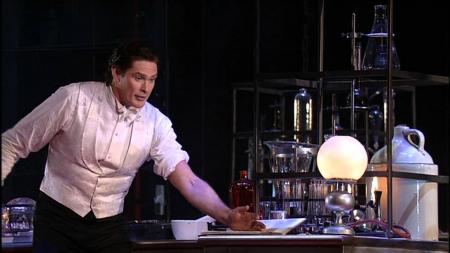 The Strange Case of Dr Jekyll and Mr Hyde

The inarguable acclaim of the 1886 novella by Scottish author Robert Louis Stevenson is such that the term “Jekyll and Hyde” has entered the very fabric of our language. We all work with or are acquainted with or have that one drunk uncle who is referred to as a Jekyll-and-Hyde type. The well-known Gothic tale has been made and remade into films again and again. The stage musical, with music and lyrics by Frank Wildhorn, debuted on Broadway in 1997. While not the most successful, it has amassed a cultish following. Geeks like me obsess over the dark music and the intense mastery of the craft Jekyll/Hyde must portray while singing a psychotic duet with himself. That shit is not easy.

Bram Stoker’s dark Victorian novel was also able to inspire Frank Wildhorn. Frankie, like myself, had a thing for dark musicals. Dracula, the Musical opened in 2004. It received plenty of negative reviews and closed after a short run, but I still love that it got made. One particular scene where Dracula seduces Lucy was highly controversial. Both actors appeared nude on stage, but only briefly, and only in certain performances. This brought a lot of attention to the musical, and the Actors' Equity clause surrounding nudity. The show was also known for its numerous fantastic special effects, and it did much better when it reopened later in Europe.

This series of famous novels by Anne Rice inspired the Broadway non-hit, Lestat. I can’t seem to leave vampire musicals alone. Though they don’t tend to do well, for some reason, even when the music is written by Sir Elton John, of all people. This musical had a short-lived run in 2006, and it obviously never got anywhere close to Lion King status. This was another uncovered jewel I myself didn’t know about until I researched this column. But I know I plan to scour the depths of YouTube with several glasses of wine until I decide whether or not it’s worthy of such criticism. I’ll let you know.