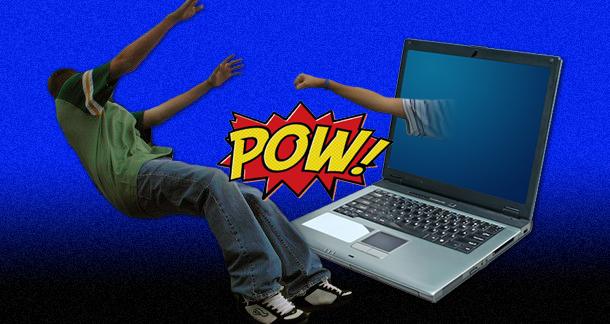 You've been there. A friend of yours posts that she's about to watch a movie. You "like" the post and drop your two cents. Three seconds later, some random person calls you a fucking idiot who doesn't know what he's talking about.

If that doesn't happen, then maybe you tell someone who posted about Black Lives Matter being the true root of all racial unrest in the country that maybe the douchenozzles with the Nazi flags are to blame.

A minute later, you learn you're nothing but a cuck and a snowflake who needs safe spaces and wants to perform carnal acts with Obama that are illegal in most states.

Doesn't ring a bell? Lucky you. I have one more, so don't fret. Maybe you post about a band whose latest album you recently enjoyed or a book you dug or a movie you thought was well made. Nothing bad could come from such a post, right? Wrong. An individual who thinks then/than, effect/affect, and their/there/they're are interchangeable drops a comment on your post telling you your tastes suck, which means you suck as a person and deserve to die a horrible death after suffering from brain, tongue, and ass cancer for half a decade. Welcome to social media!

Some people make it seem like they are only on social media to pick fights and argue about everything. Those people deserve to be punished. If someone picks a fight with you, follow these steps and you will emerge victorious from any digital scuffle.

Social media is supposed to be fun, it's supposed to be a place where we go to talk about art and things we like and look at pics of kids and cats and spend time with friends who live too far away to share a beer.

1. Deconstruct and destroy with extreme prejudice

The world is packed to the gills with stupid people, and most of them are online. People think Trump is smart. People think the earth is flat. People think vaccines will kill their kids. People believe the stuff that comes out of Alex Jones' mouth. I could go on and on and on, but chances are you've already encountered these and many, many more. The next time you find yourself in the presence of one of these individuals, take three minutes to gather a short list of links to reputable sources that absolutely dismantle their arguments. Deconstruct their narratives, find the weakest point, and attack with the ferocity of a coked up pitbull.

Someone who is absolutely sure reptilians are enslaving us will probably not change his or her convictions simply because you point out and then demonstrate they're wrong. If educating them fails, and it usually does, get personal. Look at their profile and search for something you know caused them pain in high school. Make fun of their face or their body or their hair. Life is like a big high school that you can never get out of, so act accordingly.

It's hard to win an argument when everybody is laughing at you. To make this horrible truth work for you, engage with language. Don't settle for easy, commonplace insults. Be unique. Here are a few. Think of them as my gift to you:

We all know the web is where language goes to die, so bring a little flavor into the situation with a touch of Shakespearian flair:

4. Let's get down to the truth

Still here? Good. The first three points were just me messing with you. No one wins online arguments. Want to know why? Because nothing is accomplished and no one ends up changing their stance. You can tell a racist why he or she is wrong, but none of them will go "Ah, you've made me see the light! Thank you. I will now accept everyone as my equal." I'm a fan of saying things like "The Babadook isn't a horror movie; it's a psychological thriller." Why? Because it gets people angry and they start telling me how wrong I am, how little I know about movies, and why I should think exactly like them. I don't argue with them. If someone's opinion about a movie makes you angry, then maybe you need to check your damn priorities.

You suddenly find yourself in the middle of an argument and don't know what to do. You thought that maybe you were just exchanging opinions politely, but now someone's calling you names and describing vile things involving a donkey and your beloved mother. Well, you have options. Here are some things you can do when someone starts insulting you online or insists on telling you you're very, very wrong: watch a movie, read a book, go for a walk, work on your novel, eat a sandwich, call a friend and talk to them about the stuff you both like, summon a demon, burn down a mall, take a shower, whatever.

6. Anger is a beautiful thing

I was probably in 8th grade when I learned that keeping your cool makes it impossible for folks to mess with you. It also makes them angry. At that age, boys were crazy about calling everyone gay. It's supposed to be an insult. Luckily, I knew gay people. They were great individuals whom I loved. When someone called me gay, I didn't say anything negative or start a fight. Instead, I would reply with "Yup, I'm gay. You have a problem with that?" Online behavior should be like that. When some troll insults you, take it as a compliment and laugh about it. That will make them angry, and an angry troll is great when it comes to free entertainment.

7. No one will break your teeth

The streets have given me seven broken teeth, a scar in my left eyebrow, some crazy cop stories, a few scars on my knuckles, and a few other mementos. The internet has given me...none of that. You can tell a bigot to come see your hands, but he won't. A lot of people will say they're going to come looking for you, but they won't. I've received four death threats in my journalism career thanks to my political columns back home, and I'm still breathing. It's incredibly easy to be a tough guy, or a sexy ballerina, when you're behind a keyboard. This is something you should think about whenever someone starts messing with you online. Ignore them. Laugh at their threats. Invite them to eat ice cream. None of them are going to pay your bills, right? Well, then they don't deserve a chunk of your time.

If I make you angry, I've succeeded. In fact, if I piss you off, I've already won. If I'm tempting death with my blood pressure and you're still smiling, you've won. With that in mind, have fun. Actually, if you're bored and want to argue with someone online, go ahead and do it. Know going in that nothing will change. If you ignore that and end up getting mad, that's your fault. Social media is supposed to be fun, it's supposed to be a place where we go to talk about art and things we like and look at pics of kids and cats and spend time with friends who live too far away to share a beer. I know the current political landscape makes it hard to have fun, but don't let those bastards keep you down.

Now tell me: how do you deal with arguments online? Any favorite ways to piss off the trolls?

Community Manager
helpfulsnowman from Colorado is reading But What If We're Wrong? by Chuck Klosterman August 26, 2017 - 9:44am

I think you nailed it. We argue about a lot of subjective stuff as if it's objective, and that's a complete waste of time.

And even if it wasn't, why would you want to turn off 50% of your readership?

Trump "bashing"  is more necessary than ever and a moral imperative.