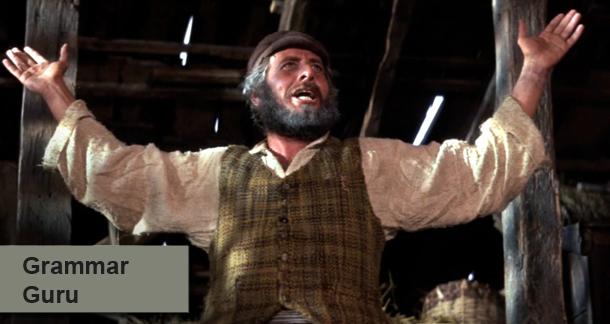 Music is a great way to remember specific details. When you take a closer look at the lyrics in certain songs, you can easily remember tricky grammar devices and spend less time looking things up. This list will not only include songs demonstrating grammar gaffes, but will also cover examples of lyrics that show proper use of grammar. The trick is remembering what’s wrong and what’s correct. Hint: if it’s pop, maybe don’t trust it.

Artistic expression can be a glorious thing. However, it comes at a cost. There is a dark side we all risk being exposed to. Prime example, when that lyrical gem “Stupid Hoe” gained popularity: “Stupid hoes is my enemy, stupid hoes is so whack...if you cute then the crew can roll / If you sexy eat my coo-coo raw.” That happened, my friends, and we let it. I actually first heard that classy Nicki Minaj tune on WatchMojo.com’s list of Top Ten Most Hated Songs.

We’ll start with what not to do, and then end on a positive note with some examples of proper grammar in music (they're out there if you search hard enough).

“I feel the magic between you and I.”

The correct wording would be “between you and me.” This one often trips people up, because “you and I” sounds more proper, like you could be wearing a top hat and a monocle when you hypercorrect your friends (incorrectly). For the sake of a slant rhyme, we can be forgiving. And that montage scene in Dirty Dancing still turns me on, so it’s all good.

“You and me could write a bad romance.”

Unlike the previous example, “I” should be swapped for “me” here. You wouldn’t say, “Me could write a bad romance” (though Cookie Monster would, nom nom). For those of us who aren’t Muppets, we would say, “I could write a bad romance.” And many of us can do just that—write bad romances. But it certainly fits Lady Gaga’s persona to talk more like a Muppet than a human. That’s just part of her magic.

“Who you gonna call? Ghostbusters!”

Depending on the tone of the writing, this would need to be edited to read, “Whom are you going to call.” Just doesn’t flow to this editor’s “reading ear” as far as that song goes. However, who / whom is one of the trickiest of the bunch. Partially because there is some debate going on right now, right this very second, as to whether or not it should be a thing anymore. In formal writing, or in fiction where a character’s voice is uppity, I would make the correction. There are all kinds of tips and tricks to remembering this one, and sometimes it still trips us up. Basically, “who” refers to the subject, and “whom” refers to the object. So it would be: “Whom are you going to call?” but, “Who will call the Ghostbusters?” also works. In the first sentence, “whom” is being called and “you” is doing the calling. In the second sentence, “who” is the one doing the calling.

2. The Dreaded “Lay vs. Lie” Shitstorm

This is pretty common in grammar circles as a notorious misuse of “lay.” Clapton was not instructing a third party to lay Sally down (though that might have made for an even more interesting and eventful song). In this case, if you happen to be aiming for correct grammar in your work, you would use “Lie down, Sally.”

Technically, this should be “Lie, lady, lie.” But something has to be said for considering overall meaning. If the song title used correct grammar, we wouldn’t know if it was about a lady lying down or a lady being dishonest. And that is part of the reason why “lay vs. lie” gets the “dreaded shitstorm” label.

Bonnie Raitt, “I Can’t Make You Love Me”

Should be “Lie down with me, tell me no lies.” This one is just useful in offering a device to help writers remember. You write “lie down,” (no direct object) but you write “lay it down” (lay always takes a direct object).

The Rolling Stones, “I Can't Get No Satisfaction”

“No” would typically be edited to “any” here to avoid a mismatched determiner: “I can’t get any satisfaction.” Again, the double negative would imply that the Rolling Stones can indeed get satisfaction. And I’m sure they got plenty…

It is fitting to note that just as music creates a mood, so too can verbs. A verb is in the subjunctive mood when the clause communicates a doubt, a wish, a demand, or regret. This was all set in place in the stone ages of the English language, before the brilliant invention of the emoji. But if you’re Gwen Stefani, the rules don’t apply. “Rich Girl” takes the lyric from Fiddler on the Roof and destroys its grammatical correctness. “If I was a rich girl” should really be “If I were a rich girl.”

And the Grammar Grammy Goes To...

There are some songs that stick out to me that actually help me remember some of those slippery grammar rules.

This used to be one of the Post-its I had sticking on the wall right above my laptop. There are still plenty of Post-its for the things I repeatedly look up—there are a number of rules that don’t stick in my head so I stick them to the wall. But I was able to discontinue that one by thinking of “Unsteady” by X Ambassadors:

Or, if you know the tune and prefer to sing it in your head like I do:
“Hoooo-ooooo-ooold, hoooold on, hold on to me.”

6. When They Actually Get Lay vs. Lie Right

This one doesn’t just get a sticky note on the wall. It gets a whole chart and some sturdy Scotch tape. Think of The Grateful Dead and one of the few songs that get it right:

The Grateful Dead, "To Lay Me Down"

The first line is “To lay me down, once more…”

Brava! Even more awesome, Garcia and Hunter get it right throughout with: “To lie with you, once more, to lie with you…”

The Grateful Dead gives us some great music, but we can also be “grateful” that they give us something to remember when we are struggling with lay vs lie.

Whether to use “me” or “myself” often poses a challenge. Again, sometimes the ultra hypercorrector will mistakenly use “myself” just because it sounds more pedantic. In most sentences, someone does something to someone else. For example, "She punched him in the teeth." Do not use "myself" when someone other than "you" is doing the action to "you." There are other times when people do things to themselves. There's a whole mess of jokes there, but I'll refrain. In such cases, use reflexive pronouns (yourself, herself, myself, itself, ourselves, etc).

Three Doors Down “Let Me be Myself”

“Proves that she must still exist / She moves herself about her fist..” Well, you can just listen to the song to find out what that one’s about. But as far as use of reflexive pronouns, this fits. You wouldn’t say “She moves her about her fist” (a pronoun confusion nightmare that I see often, surprisingly).

8. Musical Theater Nerds Know How to be Moody

“If I were a rich man” from Fiddler on the Roof.

Just remember to tell yourself:

Lessons are in the Lyrics

We all know songwriters use and abuse artistic license on the grammar front for the sake of a catchy lyric. However, it’s fun for an editor like me to point out grammar blunders in music lyrics (and in know-it-all social media posts—if you are going to get on your soapbox, for shit’s sake, at least have a dictionary app up and running). And it’s also a useful tool for writers.

The music is great, I love to use these songs as dzwonki mp3

You can move on to research on klingeltöne fürs handy. Maybe it will help you

Very good article, I love listening to music, I listen to music all the time, even at work and of course even my ringtone must be my favorite song, I often use darmowe dzwonki na telefon to find your favorite music.

These are wonderful things. Above all, the tonos de llamada is often used by people for their devices.

Your article is very good and useful for everyone. Besides, I want to let everyone know a completely free and high quality ringtone website Bruitage containing all the best and best songs 2021

music is art. They do it in different ways. I also make music and I can boast that it's pretty good. I do it in completely different ways and even add sound effects. For example, the sound effect "wrong answer sound" https://notification-sounds.com/1154-wrong-answer-sound-effect.html is unusual and funny, but therefore you can use it for originality

With spotify premium apk 2022 you can have a lot of songs and also a lot of great music available in the world.

Get free games and apps mod apk terbaru at ModCombo. You will experience unique features and quality. Wishing everyone the best experience.

now i am also listening to music with spotify premium apk 2022. there are a lot of good songs