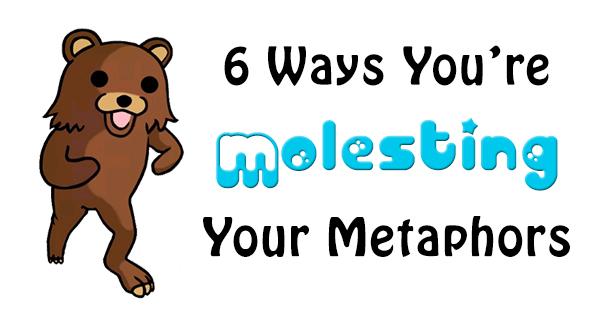 But not all metaphors are good, and improper metaphors can be downright criminal. Here are six common ways you're molesting your metaphors. And you need to stop. You sick bastard.

Also known as mixaphor, the mixed metaphor is one of the most perverted abuses figurative language can be subjected to. To be powerful, metaphors must be cohesive; the entire metaphoric passage must make sense. When Rush Limbaugh tells us to "button your seatbelts," or a friend tells us their ex is "a poison that lit the world on fire," cringing seems to be the only appropriate response.

Of course, you can mix metaphors to humorous and positive effect if you find the common thread between those metaphors. Doing so is as much fun as shooting monkeys in a barrel, but it's a bridge you should burn when you get to it. In general, keep your metaphors tight, cohesive, and linear.

It was just the tip of the iceberg.
~Millions and millions of writers

Cliche metaphors can be tempting; they're seen so commonly because they powerfully express an idea. Or at least they did. Once. These "tried and true" favorites are like overplayed radio songs. We may have a sense of comfortable familiarity with them, but they gradually lose their expressive power and eventually become irritating. If I hear "Achy Breaky Heart" or "So quiet you could hear a pin drop" one more time, I'm likely to get violent.

If you want to get a sense of cliche metaphors in action, read Suzanne Collins. I'm actually a Hunger Games fan, and few people hook readers as well as Suzy does, but there's no denying that she uses enough cliche metaphors to sink a ship. Her metaphors are perched like buzzards on rooftops. As blinding as the noontime sun.

Her heart was an airplane.

So, was her heart ... flighty? Big, mechanical, and whirring with giant turbines? Uncomfortable and usually late? Did it once fly into the twin towers of your heart? When you choose a metaphor that can be interpreted in a great many ways, you must either clarify what you mean or choose a metaphor with more narrow interpretations.

"Her heart was an airplane: big and heavy, yet somehow always flying." A metaphor like this can be okay, but keep in mind the more you explain your metaphor, the less powerful and more intrusive it becomes. When possible, try to use a succinct metaphor with a clear interpretation.

While semi-literal metaphors can be amusing when used intentionally, some writers carelessly use metaphoric language that could reasonably be construed as a direct description. If your dog is a disease-ridden cur ... you may have to clarify whether you meant in personality or current health status. If the neurologist was picking your brain for answers to his questions, you'll need to specify some details.

5. Referencing Outside the Common Experience

As a culture, our shared experiences bind us together. We know the same songs, are aware of the same news stories, understand the same jokes, and abide by (or deviate from) the same basic social expectations. However, much of life takes place outside of the common shared experience. So your metaphor about how the insult was a critical hit with a +5 vorpal sword will only be effective when your audience understands those sub-culture reference points. Saying your love was "francium-215" will only work well with those who know what the hell francium-215 is.

These niche metaphors can be fun and powerful; they bind together the sub-culture precisely because what's being referenced is outside the common experience. However, you must be deeply aware of your audience before you leap into these obscure sub-culture references. Using obscure metaphors incorrectly will distract and confuse your audience while adding nothing to your descriptions.

Love is a snowmobile racing across the tundra and then suddenly it flips over, pinning you underneath. At night, the ice weasels come.
~Matt Groening

Extended metaphors can be powerful when wrangled appropriately. (This thorough LitReactor article on extended metaphors from Taylor Houston is well worth a read if you want to dive in further.) However, when a metaphor keeps going for too many miles, it breaks down. You have to get out and open the hood, surrounded by the smoke of your overheated words. You're likely to burn your fingers on the piping. You can bet your brother-in-law, the auto mechanic, will never let you live it down.

The results can be humorous if that's what you're after, but assuming you're trying to evoke a response other than laughter, you need to keep those metaphors in check.

Maybe you've successfully avoided the temptation to molest metaphors in these disturbing ways. Be honest with yourself, though. If you're abusing these helpless pieces of figurative language, you must stop yourself now.

For more metaphor goodness, check out this Chuck Palahniuk article on figurative language, or explore some lessons, games, and exercises in my own metaphor lesson series.

That was like a breath of fresh air through the morning fog. You know, easy like sunday morning, monday afternoon, and wednesday evening all rolled into Lance armstrong (one big ball)

That article was just the tip of the candle that's burning at both ends.

It's not exactly rocket surgery.

Poorly done metaphors are the most annoying thing i see in modern writing, specifically short-form stuff. People just don't understand how one bad metaphor will spoil a whole story. Bad metaphors are the rotten chunks of food stuck in a garbage disposal, stinking up the whole kitchen.

Taylor from Durango, Colorado but living in Portland, Oregon is reading The Paradox Hotel by Rob Hart December 17, 2012 - 12:32pm

Thanks for the shout out, Rob! Wait, is "shout out" a cliched metaphor? Probably. I am so guilty of that.

The news is a great place to find molested metaphors. My favorite faulty metaphor this week was on CNN. The broadcaster said it's called a "fiscal cliff" because the economy will "hit a wall." So...which side of the cliff are we on?

My favorite: "It was hotter than a whorehouse on nickel night."

Taylor from Durango, Colorado but living in Portland, Oregon is reading The Paradox Hotel by Rob Hart December 17, 2012 - 4:14pm

@revstacy: Your profile picture--I have that as a magnet on my fridge. "Coffee is God."

I love how most of the responses played on the article's themes.

Metaphors scare me a bit. At the same time, I am starting to find myself worrying about every little detail. Is the writing boring? Should I have used that metaphor? Are those prose looking "a bit too purple"? etc. All of the fear and stress is going to prevent me from ever becoming a true writer. Yay for hobbies.

My favorite metaphors are the ones which bring real life into the story with their simplicity and clarity. My all-time favorite is "He was all over it like snot on a six-year-old's sleeve."

Sure I created it myself, on a night when I was tired, and probably a little drunk, and I was taking medicine at the time, and I'd had a session that day with my shrink, and my dog had gotten sick on the floor, but dammit, Jim, it is still my favorite.

I used got lazy and used "pin-drop silence" in the thing I'm working on right now. Yeesh. I knew it was hackey, but I sorta needed to keep rolling through.... second time around I promise I'll think of something better...

You couldn't have phrased your title some other way? TW that shit.

At Nathan Horowicz Antiques Inc., we specialize in estate silver and we have earned the trust of discriminating collectors, worldwide. Our expanded showroom literally overflows with sterling silver pieces to suit every style & taste.