5 Ways to Get Rid of Your Damn Empty Modifiers 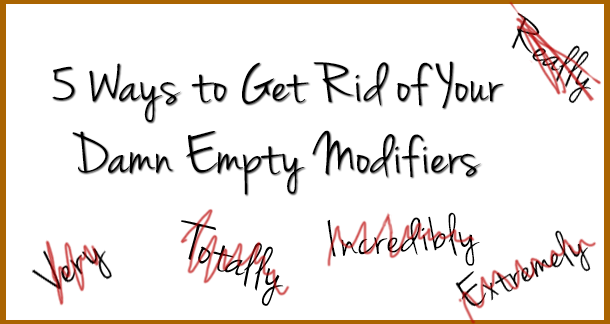 I discussed the need to get rid of empty emphatics when I gave you 8 words to seek and destroy in your writing, but just saying that you should get rid of a thing doesn't say much about the right way to do so. Today I'm going to show you a few of my favorite ways to get rid of your empty modifiers.

What exactly is an empty modifier?

It's any word whose only role is to intensify the word it's modifying. The prime candidates here are "very" and "really," but "extremely," "intensely," "totally," "absolutely," "quite," and many other emphatic modifiers make the list. Further, many emphatics that shift meaning slightly or add some flavor (e.g., "just" or "damn") should be approached with skepticism, and it's easy to find flimsy "-ly" words that show us why the road to hell is paved with adverbs.

I'm not saying that empty modifiers should never be used. For one, we use them in everyday conversation and they're functional there: they allow us to avoid combing our vocabularies for the perfect word and they buy us time to come up with what we want to say next. Since it accurately reflects real-world behaviors, using these empty emphatics in character speech may lead to more realistic dialogue. As a general matter of principle, though, these empty emphatics should be hunted down and killed without compunction by using any one of the following methods.

This is the easiest and often the best solution. The emphatic adds so little in actual meaning that getting rid of it will usually leave your message unchanged while removing clutter. Can't bring yourself to cut your "very"? Follow Mark Twain's advice: "Substitute 'damn' every time you're inclined to write 'very;' your editor will delete it and the writing will be just as it should be."

(Though, these days, you may need to use something a bit more extreme to earn the cut; I offer "mother-fucking" for your consideration.)

Both of us were using the repeated "really" as a way to avoid saying the more powerful—and culturally loaded—word that captured our mutual infatuation. There was something adorable about how hard we worked to avoid saying "love," but in the end what we both meant by (really7 × like) simply equaled love.

There are more powerful versions of most words out there. Attractive becomes beautiful becomes gorgeous. Chilly becomes cold becomes freezing. This is one of the few times when I will recommend you go out and use a thesaurus—so long as you're using that thesaurus to find these more powerful descriptors rather than for the intellectual wank-job of adopting a less accessible vocabulary.

3. Emphasize through context and comparison.

Shane was really tall. Shane had to duck his head to get through the doorway. Everyone turned to look up at him as he did. Even slouching, Shane was head and shoulders taller than anyone else in the room.

Sometimes summary is preferable to scene, but if your point is important enough to deserve emphasizing it's probably important enough to deserve illustration. Showing the character attribute or location quality has another, more substantial advantage: rather than asking your readers to trust you (e.g., "It was really creepy," where "really" serves primarily as a request that the readers please believe the statement), you're causing them to experience the sensations you've described. Trust isn't necessary: Whatever the reader experiences or concludes is sufficient.

But be warned: It's easy to fall into the "He was as tall as a 6' 2'' tree" trap. This isn't about giving data. It's about portraying the sensations that show, not the technical elements of what you're describing, but the experience of it.

As we all know, Hitler was extremely anti-Semitic had a bit of a problem with Jews.

Especially when you're making a statement that's common knowledge or already established elsewhere in your work, understatement can get the point across while adding humor. Your reader is also rewarded for their existing knowledge: Since the literal meaning of the text and the intended meaning are different, your reader is "in on the joke."

5. Use figurative language for an illustrative image.

Richard was very more obnoxious than a pair of flies buzzing in circles around your head while you're trying to write an end-of-term paper.

I'm a big fan of metaphors—perhaps to the point of excess. Still, there's little doubt that figurative language (in simile or metaphor) can effectively add emphasis in a short space. Unlike solution #3, figurative language can be used during summary. This approach also allows you to combine contradictory images or statements and provide a deeper portrait of person, place, or experience you're describing (e.g., "Her heart was an iron rose").

If you'd like to see one of my favorite examples of metaphor adding emphasis and complexity, check out "Lovesong" by Ted Hughes.

Whichever method you use to eliminate your empty modifiers, it's important to eliminate them in a way that maintains your meaning and provides the emphasis you originally intended. How much do you struggle with empty verbiage like this? And what approaches do you use to kill your damn empty modifiers? Let me know in the comments, below.

Great advice overall.  In example 3, I don't think you need the third sentence.

Bradley Sands from Boston is reading Greil Marcus's The History of Rock 'N' Roll in Ten Songs August 7, 2013 - 9:15am

I think it's fine for first person/dialogue, but otherwise shouldn't really be used in third person writing.

eirikodin from Auburn, NY is reading Mediterranean Caper by Clive Cussler August 7, 2013 - 9:19am

Sarcastic understatements is definitely part of my style.

@Karl: Agreed, but I was also trying to show both context and comparison in the example.

@Bradley: There may be rare exceptions for me in third-person narratives. But since that would boil down to those few words that don't have a more powerful version or an easy image but still need to be communicated via summary---well, hopefully the exceptions would be very rare. ;)

@Eirikodin: When the time is right for sarcastic understatement, it can be a powerful weapon. Like a mouse carrying a hand-grenade.

@Neil: It would be included in the "many other emphatic modifiers" I noted, though "actually" does have some valid non-emphatic uses.

@Laurie: Yep. You're the second person who noted that, actually. The first person was not me. Nor was it my copy editor.

Sadly, I can't directly edit my articles once published, but I've sent the tweak into the editing pipeline.

I was just giving you a hard time!  What can I say?  I just graduated with a BA in Journalism and have to put it to use somehow.

Aren't "a bit" and "a little" and every other modifier that diminishes intensity equally useless according to this theory?  I only ask because it appears in your Hitler joke.  Am I to understand he had a disagreement with Jewish folks?

@Laurie: I know that my education has been pursued with the goal of giving people a hard time. It's a primary function of academia, as far as I'm concerned. ;)

@djack: In this case, "bit" isn't empty because it adds an element of humor that the phrase "a problem with" lacks. If the statement "bit of a problem" were an accurate description of what we were discussing, the phrasing should—at a minimum—be critically examined. However, since the point of understatement is to paint a picture by pointing humorously/ironically to what a thing is not, several modifiers will change their functions in that context.

Generally speaking, though, you're right: diminishing modifiers can also be empty. You're more likely to run into the dilemma that better words don't exist to diminish your statement, since once you've hit the bottom rung ("chilly," to return to my "cold" example, above) there's still space between neutral (neither cold nor warm) and the message communicated by the original word. In "a bit chilly outside," the "bit" does more work than "very chilly outside"-'s "very."

While I've noted that eliminating these modifiers is a good general rule, it shouldn't be taken as prescriptivist dogma. In every case, modifiers should be examined carefully: What is their function? Are they fulfilling those functions well? And might there be a better solution?

I struggle with this. Modifiers are common place in my vernacular because Las Vegans love to pepper their sentences with them. Like, totally. :)

I've been working to eliminate them from my manuscripts, though I still keep some of them in dialogue. That seems to be the proper place for them, in some cases, because most people will use modifiers when chatting with a friend.

I find my own greatest vice in this area is substituting less common empty modifiers (e.g., deeply, wonderfully, intensely). It's harder to note that they're empty because the novelty / rarity of the phrasing overshadows the emptiness (which may, in fact, be a function of its own---but a lazy one). As my vocabulary expands to allow me to keep emphasizing in these empty ways, I have to laugh at myself: I'm working very hard to remain lazy.

bloodeythornes from Born Wichita Falls, TX. Most of my life around Des Moines, IA. is reading Michelle Wright's Dead Dreams August 25, 2013 - 1:39am

The adage is writers don't tell, they show and that applies to a lot of examples shown above besides creating more descriptive fiction.  It's all a part of the drawing in the reader...this I understand.  The way I talk and the way I write does include those empty modifiers because that is the way people speak.  Put it this way, between being the readers' educator as to things should be and ringing a chord with them, I fall somewhere inbetween.