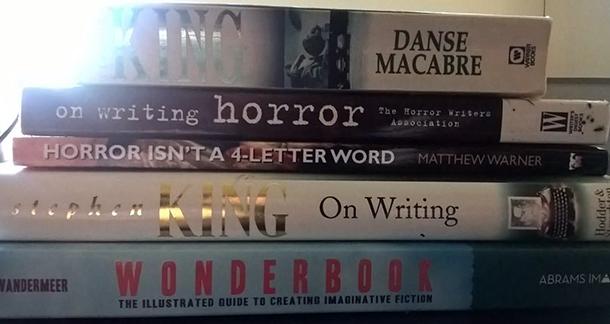 Writing is hard. Sometimes you need advice or inspiration, or you just want to read something that's gonna put you in the headspace for writing. Books can't teach you how to write, but there are some that I enjoy flipping through now and then, be it for inspiration or a much needed dose of encouragement. Reading about how other writers struggle (the inevitable chapter in every book about writing I've read so far) is sometimes enough to push me to write.

I picked a few books that seek to inspire, rather than teach, but every writer has weak points that they can work on, so there's a little bit of that, too. 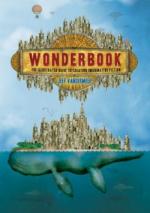 Starting with the latest and greatest, Wonderbook is a pretty useful book to have on your shelf. There are some pretty great essays about the art of writing in it, but I get the most use out of it by leafing through it when I need a quick story idea or when I'm fighting writer's block. It's been very good for me on that front. It has advice ranging from structure and pacing to characterization and world building. Features some heavy hitters like George R.R. Martin, Lev Grossman, Neil Gaiman, Michael Moorcock, and Catherynne M. Valente.

Favorite Part: How to approach the beginning of a novel, using VanderMeer's Finch as an example.

Pick it up if... you're having trouble getting inspired, you want to fix specific problems in your writing, and you want to read advice from some of the top authors working today. 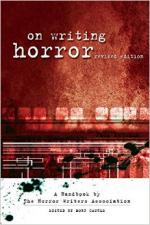 'On Writing Horror: A Handbook by the Horror Writers Association' edited by Mort Castle

Synopsis: The masters of horror have united to teach you the secrets of success in the scariest genre of all!

In On Writing Horror, Second Edition, Stephen King, Joyce Carol Oates, Harlan Ellison, David Morrell, Jack Ketchum, and many others tell you everything you need to know to successfully write and publish horror novels and short stories.

Edited by the Horror Writers Association (HWA), a worldwide organization of writers and publishing professionals dedicated to promoting dark literature, On Writing Horror includes exclusive information and guidance from 58 of the biggest names in horror writing to give you the inspiration you need to start scaring and exciting readers and editors.

One of the first books about writing that I bought. Solid advice on a variety of subjects, mostly about characterization and themes, but also some pretty interesting essays on horror. Despite the title, there's plenty of good stuff here for writers of any genre. A few chapters are a bit outdated, usually the ones about marketing or the internet (The chapter on internet research mentions Altavista), but that's doesn't detract much (they're safely placed at the end of the book).

Favorite Part: Harlan Ellison spending an entire interview yelling about the horror genre as a whole. Always down for a good rant, even if I don't agree with it. I'm glad this one is in this book.

Pick it up if... you write horror. It's the de facto book about the genre. Jack Ketchum and Joe Lansdale's chapters are insanely good. 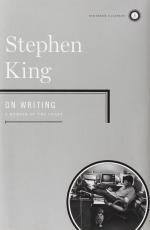 'On Writing' by Stephen King

Synopsis: Part memoir, part master class by one of the bestselling authors of all time, this superb volume is a revealing and practical view of the writer’s craft, comprising the basic tools of the trade every writer must have. King’s advice is grounded in his vivid memories from childhood through his emergence as a writer, from his struggling early career to his widely reported, near-fatal accident in 1999—and how the inextricable link between writing and living spurred his recovery. Brilliantly structured, friendly and inspiring, On Writing will empower and entertain everyone who reads it—fans, writers, and anyone who loves a great story well told.

Probably my favorite of the bunch. I'm not sure show useful it is in practical matters, but King's unbridled enthusiasm for writing is infectious. For a King fan, the insight into his writing and life is fascinating (pair it with Danse Macabre if you're into that). For everyone else, it should at least get you pumped about writing. His advice on rewrites is great too. If you're only going to buy one book out of this list, get this one.

Favorite Part: Stephen King's beginnings as a writer, nailing rejections to his wall. Reminder that the road is hard for everyone.

Pick it up if... you want to get writing advice from arguable the best horror writer alive today, or if you just like writing. 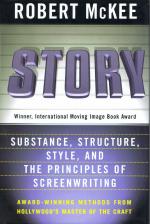 'Story: Style, Structure, Substance, and the Principles of Screenwriting' by Robert McKee

Synopsis: Robert McKee's screenwriting workshops have earned him an international reputation for inspiring novices, refining works in progress and putting major screenwriting careers back on track.

In Story, McKee expands on the concepts he teaches in his seminars, providing readers with the most comprehensive, integrated explanation of the craft of writing for the screen. No one better understands how all the elements of a screenplay fit together, and no one is better qualified to explain the "magic" of story construction and the relationship between structure and character than Robert McKee.

Story focuses on screenwriting, but since it largely deals with plot and pacing, the advice is interchangeable. One of the books I picked up when I started to graduate from short stories to longer works, I found it by far the most cleanly written and easy to understand. My controversial opinion is that most of the recent books that deal with plotting and structure are just ripping this one off anyway, so why not go straight to the source?

Favorite Part: Not a particular chapter, but the overall tone of the book. There's not a lot of ''this is what I think about writing'' which I find grating after a while. McKee explains things in a simple, straightforward manner, light on the preaching.

Pick it up if... you're looking to get the basics down when it comes to pacing and structuring a novel. If you have any interest in screenwriting, this is the bible, in my humble opinion. 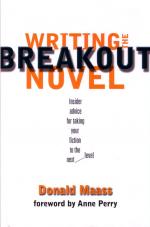 Synopsis: Maybe you're a first-time novelist looking for practical guidance. Maybe you've already been published, but your latest effort is stuck in mid-list limbo. Whatever the case may be, author and literary agent Donald Maass can show you how to take your prose to the next level and write a breakout novel - one that rises out of obscurity and hits the best-seller lists.

Maass details the elements that all breakout novels share - regardless of genre - then shows you writing techniques that can make your own books stand out and succeed in a crowded marketplace.

Using examples from the recent works of several best-selling authors Maass illustrates methods for upping the ante in every aspect of your novel writing. You'll capture the eye of an agent, generate publisher interest and lay the foundation for a promising career.

Okay, I'm cheating a little bit: This isn't really one of the best. I just wanted to introduce some variety (and probably some controversy). This one is written by literary agent Donald Maass. More of a bedtime book, it still has useful information and an agent's perspective will come in handy when it's time to sell your work. Old hands might get something out of it; new writers might get some bad habits. Buy it for that one uncle you have who insists he wants to write a book, some day.

Favorite Part: The chapter on themes is interesting.

Pick it up if... you're interested in marketing your work to agents and publishers. Or if you wanna write like Nicholas Sparks, I guess.

This is a short list; I probably left your favorite out. I'll mention a few more here in the liner notes, just to fill your TBR pile: Writing Fantasy & Science Fiction by Orson Scott Card, Plot & Structure by James Scott Bell, Self-Editing for Fiction Writers, Writers Workshop of Horror and Save the Cat.

Which ones did I forget? Let me know in the comments.

I would add The War of Art by Steven Pressfield - not so much about craft, but it always keeps me writing, even when I'm trying to procrastinate by reading about writing.

Nice list - I have all but the Maass book on my shelves.

I also like "Natrative Design" by Madison Smart Bell.  It's about how to structure the actual narrative - e.g., linear v. spiral, when to summarize v. when to dramatize the scene.  What's particularly helpful is that it has full stories by other authors as examples, which Bell then examines in detail. A good way of helping you think about the how to tell, but not so much the what.

Another one I like, but I'll admit is (a little) more academic than boots-on-the-ground, is The Rehetoric of Fiction.  It's a helpful (and readable, I swear!) examination of the why that underlies most other writing advice, but by taking a historical perspective it provides much more context than many 'how to' books, which are very much products of their time.  If nothing else, it's worth reading the analysis of 'show, don't tell' and how that came about.

On Writing  and Wonderbook are on my bookshelf. Sometimes I thumb through Wonderbook just to look at the illustrations, they always put a little gas in the creative tank.

katrinarobin from Charleston, SC is reading Authority by Jeff VanDermeer June 20, 2015 - 8:37am

Awesome list--thanks! Plan on getting Wonderbook for sure, and possibly one or two others. I would add Writing Down the Bones and Wild Mind by Natalie Goldberg, especially for beginner writers--I read them when I was 19 or 20 and got a ton from them.