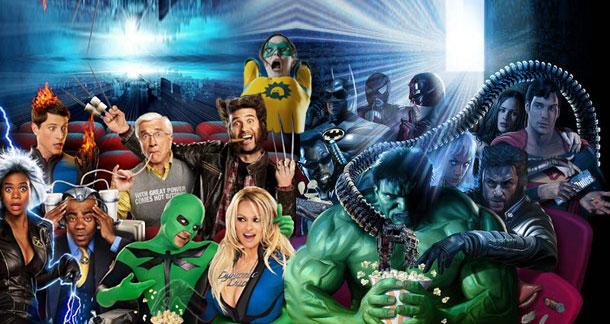 A lot of us on staff here at LitReactor are big fans of the comic book adaptation. We normally try to bring everything back to writing, so this is admittedly a bit of a reach.  Having said that, it's time to strap on that utility belt and tie a blanket around your neck--hero season at the movies is bearing down on us faster than a speeding production company.  Let's begin.

Nicolas Cage has an interesting past with the comic book movie.  He was lined up to play Superman in the Tim Burton-directed potential shit show Superman Lives.  A black and silver costume that glows--need I say more? Then he was set to play Scarecrow in Schumacher's Batman Triumphant, but people decided they had seen enough nipples and neon, and it fell through.  Cage finally caught a break with Ghost Rider, which was great for him because he's actually a Ghost Rider fan and has the tattoo to prove it.  Of course, Ghost Rider isn't the most well-known hero, and the first film was a critical flop. But that doesn't change the fact that it crossed the $100 million mark.  When a film makes that kind of money--whether you like it or not--you're getting a sequel.  Honestly, unless there's some huge positive buzz on this, I will probably pass.

The Good: Don't count on Mr. Cage phoning this one in.  He loves this character so much he'll bust ass to perform the hellfire out of it.

The Bad: If you didn't like the first Ghost Rider movie, prepare for more of the same.

The Ugly: The part where Ghost Rider goes pee pee and flames come out.  Pretty sure that never happened in the comic book.

I still feel a bit weird about this one, considering it's a reboot of a successful franchise whose last installment dropped a mere four years ago.  The first film of said trilogy was pretty good, the sequel nailed it, and part three gave us an emo Spider-Man with jazzy musical numbers. Amazing is going to stick a little closer to the source material, however.  Gwen Stacy will be the love interest as opposed to Mary Jane.  Yes, in the comic, Gwen was the  "first love," and hot damn, doesn't Emma Stone just look totes adorbs!  We're getting mechanical webshooters, so Mr. Parker can finally show off his scientific abilities.  Then there's the costume, which has more of a homemade quality about it.  It always bugged me a little that in the Raimi version, Spidey's suit looked like it was tailor-made by the Sony costume department and not a high school student.  Director Mark Webb seems to be angling more in the "realistic super hero" direction that made Nolan's Batman films such a huge success.  Then there's Andrew Garfield who, quite honestly, I liked in The Social Network, so I think he's got what it takes to pull off the Parker character.  It's how he plays the hero that feels iffy.  Spider-Man is sarcastic, quippy, and a little bit over the top with his bravado.  Hopefully, Garfield can capture both sides of the coin and Webb can make this version his own.  Whether he likes it or not, he's going to get compared to Raimi as long as he's at the helm.

The Good: Loving the realism angle and the cast--especially Rhys Ifans as the Lizard.

The Bad: Having to sit through the origin story again.  That's going to eat up about the first hour or so.

The Ugly: That Mirror's Edge POV in the trailer.  Yikes, that was terrible.

Hot damn, this feels like a lock.  I'll see Spidey, of course, but The Avengers is the film I might fork over the extra $16 to see a second time.  You really have to hand it to Marvel, they did it right putting this thing together.  After seeing a Sam L. cameo in both Iron Man films, the last Hulk Film, Captain America, and Thor--we're finally going to see it all come together.  This looks to be a cavalcade of awesomeness.  My only concern is that it might suffer from Transformers 2 syndrome.  No, not racist robots. I'm just hoping that amongst all the awesome fights and other cool shit that the actual story doesn't become an afterthought.  Tony Stark doesn't exactly have all of his shit together.  Captain America just woke up from a 70-year ice nap.  Thor is almost completely new to life on Earth.  And Bruce Banner (the Hulk) is being played by yet another actor, so there's that to establish.  Then there's the issue of getting all of these guys to work as a team.  There's plenty that needs to be sorted out on a personal level whilst Loki goes nutty nuts with power.

The Good: The pay-off to a methodical build-up that started in 2008.  Expectations are high, and with Joss Whedon at the helm, this looks like a sure shot.

The Bad: I have to wait until May to see this? Dammit!

The Ugly: They never seem to make the Hulk look right, do they? Where's Ferrigno?

Look, I believe in Christopher Nolan.  There's no disputing that.  The guy took the genre and the Batman character and made it about as perfect as anyone could (with that one exception of the weird voice).  I have no doubt that The Dark Knight Rises will be a commercial and critical success, but the thing is, I'm just not too terribly excited for it.  I remember getting chills when I first heard Ledger do the Joker voice in The Dark Knight teaser, and then he stole the show with his performance.  Bale kicked ass, as always.  It was arguably one of the best movies I had seen--not just in the comic book genre.  We're talking movies period.  Now we have the last installment in the form of The Dark Knight Rises. Hathaway's Catwoman costume sucks.  The Bane costume is meh.  The trailer is Gordon being sick in a hospital bed and some chanting.  We're not getting much action in the way of new villains.  I'm just not seeing anything that's creating that same need to see this movie.  You can bet your ass I will, but with reasonably lower expectations.  Nolan has a great track record, and I'm willing to gamble he'll come through yet again. Whether this installment will trump TDK remains to be seen.

The Good: Nolan is ol' reliable.  Expect a great flick to close out his run on the franchise.

The Ugly: A backbreaker delivered by Bane if Nolan decides to include it.  Potential SPOILER.

Okay kiddos, chime in with your thoughts in the comments.

Class Director
Rob from New York City is reading at a fast enough pace it would be cumbersome to update this November 7, 2011 - 1:44pm

I can't properly express how excited I am for The Avengers without taking off my pants first.

I'm not excited about any of these, truth be told. All right, all right, I'll agree on The Avengers. Only if I have to choose one. However, I am certainly excited to witness Rob's expression of excitement. *grabs the popcorn*

I rather like the Catwoman costume; it strikes me as a blend between modern day comics and Julie Newmar in the old TV series.

Joshua Chaplinsky from New York is reading a lot more during the quarantine November 7, 2011 - 5:13pm

I'm gonna put on my bullet-proof vest before I say this- I'm not really a fan of comic book movies. Iron Man was just okay. I didn't like the first Spiderman and I haven't seen the second one. I didn't like Batman Begins, and the only reason The Dark Knight was even remotely watchable was because of Heath Ledger. I don't think The Dark Knight Rises is gonna be nearly as good, and I could care less about the rest of those flicks. Is there something wrong with me?

Class Director
Rob from New York City is reading at a fast enough pace it would be cumbersome to update this November 7, 2011 - 5:27pm

Nothing wrong with you Josh - there's a couple that have been pretty good movies but none of them have managed to rise to the level of 'great.' Like, The Dark Knight. It was a pretty good movie but doesn't deserve the praise it gets, and wouldn't have been remembered as fondly if not for Ledger.

I'm a ghost rider fan but I did not like the first movie. This one looks like it might be cool though. Just a fun action flick.

I'm sick of origin stories and the amazing spiderman is going to be yet another one. Probably wait for dvd on that one

I'm a batman fan too and I'll definantly have to see this. Love the dark knight. A little long but really good.

I notice I'm the only female who's commented...So, is everyone taking off their pants in excitement? At this point, I don't even care what's playing. *grabs more popcorn*

Joshua Chaplinsky from New York is reading a lot more during the quarantine November 7, 2011 - 8:39pm

I wasn't wearing pants to begin with.

Now it's a party!

I remember hearing there would be a Deapool movie, which would probably suck and would piss me off. But if it was well done that's what I'd want to see. Or Terror, Inc. Or Moon Knight. Or probably a dozen other guys no studio would ever make a movie of.

Dwayne from Cincinnati, Ohio (suburbs) is reading books that rotate to often to keep this updated December 7, 2011 - 2:24pm

I'm kind of think Hathaway might shock us. I'm not really a fan of the style of movies she has been in up till now but from what I have seen of her work she is at least trying to act not just phone it in like so many people do with cute chick/kid flick stuff. At some point you have to get sick of all that overly sweet Disney stuff and just want to be the bad girl, so maybe if she is half way normal she can channel that into something really cool.

I'm excited about Avengers and Dark Knight Rises. Not sure that The Dark Knight deserves the praise it always gets. I'll agree that Bale is a great Batman, and Ledger was great as Joker, but the rest of the movie was lacking. Batman Begins was definitely better.

IMDb is your friend. Lou Ferrigno is the voice of The Hulk in Avengers. I agree that the CGI Hulks never look good though. But Ferrigs doesn't quite have the hugeness people are expecting now. He definitely was the best Hulk though.