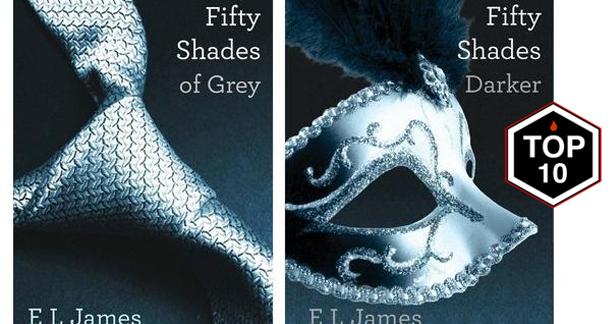 Who cares, you ask?

You. You should care. And here is why: when a unicorn crosses your path, you look at it. You examine it. You determine what can be gained from seeing it. Even if it's an ugly, non-sparkly, bent-horned, club-footed unicorn, you still look. Because it's a unicorn. That's how I feel about Fifty Shades Of Grey. It's a literary unicorn. And while it may burn our eyes to gaze upon it, we must. We must because if we don't learn from our mistakes, we are doomed to repeat them. Or something like that.

Anyway, here's what we can all stand to learn from Fifty Shades Of Grey:

First and foremost, like I said, this is a unicorn. It is rare. It is unusual. It is unprecedented. Don't expect it to happen to you--but know that it can. That it is possible. That it can be done, and it could be you who does it.

2. Take Inspiration Where You Can Get It

Oh, Bella and Edward inspired you to write a sexy book about sexy sex? You are either a 12-year-old girl who shop-lifts from Hot Topic and kisses a poster of Robert Pattinson at night, or you are now a millionaire named E. L. James. Either way, you are inspired, and you should roll with it. Actual inspiration tends to lend itself to better (or at least, more relatable stories) than whatever you poop out because a publisher expects another novel. Don't shrug off a good idea just because it comes from something not-great.

3. Nom-de-plumes Still Have A Place

Initially, E.L. James (real name: Erika Leonard) published her book under the name--I am not making this up--Snowqueens Icedragon. That book may not have done so well. When published by E.L. James, however, it was suddenly way more mysterious. By picking a totally non-threatening, boring pen-name, the author did a pretty smart thing--she removed any way for onlookers to judge on name alone. I mean, it worked for J.K. Rowling.

Speaking of E.L. James, she has given several interviews in which she is flat-out honest about the sexy stuff, about how she wrote it during her "midlife crisis," and how she was totally blown away by the reception. Which sounds simple, but in the face of as much scrutiny as this woman has seen, it would be easy to cower and be ashamed of the fantasies and the bondage and the sex. But instead, she's just been super-open about it, which seems to endear her to her fans, and make them more ready to defend her.

"Sex sells" is the stupidest adage of all time, even if it is true. But even more true is that safety doesn't sell. If this was a nice, safe book that danced around all the sexy bits, it wouldn't have titillated church ladies, it wouldn't have made for splashy headlines, and it wouldn't have felt like a naughty treat. James went for it, and as a result, people talked about it. Well played.

6. Don't Be Afraid To Milk The Medium

7. Cover Art Matters--Even When It's Bland As Hell

Probably one of the most important things I learned about this book was the reason that it wasn't hidden behind the digital equivalent of a paper bag at the drug store. According to a friend who works at Amazon, traditional bodice-rippers are usually hidden away from the system's mysterious and powerful recommendations, because the covers could be offensive to some. But Fifty Shades Of Grey has a nice, tame cover--so it actually gets recommended to women who are surfing for erotica and those who aren't. Basically, bland cover = free publicity.

8. To Most of the Population, Writing Matters Less

You probably already know this, but I'm going to say it anyway: Fifty Shades Of Grey is not exactly an artfully crafted piece of literary brilliance. It is, in fact, pretty poorly written. There's even a Tumblr that just quotes the worst lines from it. But for most of the readers, that is entirely unimportant. And because the book was initially self/ePublished, there was no one to go through and red-pen it (or outright reject it) for all of the suckitude. But that doesn't matter. Because people don't care. They still think it's a "fun read" and that it's "addictive." Let's call it Stephanie Meyer Syndrome. Or possibly Agatha Christieism. Either way,the point is that if the plot is good (or, at least, hook-y enough), millions of people will wade through acres of terrible prose to get to it.

9. You May Have To Decide Between Critical and Commercial Success

Because most people don't care whether the actual writing is very good, you may be faced with a choice. Do you write the Murakami-esque pieces of genius you've been meaning to write and desperately shop it around for the rest of your life, or do you ePublish your smutty romance/erotica trilogy and ride the wave? Or, do you somehow combine the two, and if you do, could you please share with all of us how you did it.

10. When In Doubt, Piss People Off

I have seen more people writing about how much they hate Fifty Shades Of Grey than giving it any kind of a positive review. Churchladies hate it because it makes the marriage bed impure. Writers hate it because of the aforementioned clunky prose. Literary agents hate it because if ePublishing can churn out a bestseller, they are irrelevant. Schools hate it because it might give teenagers funny ideas about putting things in funny places. Feminists hate it because the female protagonist is just the worst. But they all hate it enough to write about it and talk about it. And what piques most peoples' interest more than a rave? A rant. If people hate your book but remain curious (Oh? It has BDSM? Well...I may have to get me a copy...), you'll be laughing all the way to the bank to cash that big, steaming hate-check.

Finding Success When Your Back is Against The Wall

JEFFREY GRANT BARR from Central OR is reading Nothing but fucking Shakespeare, for the rest of my life June 8, 2012 - 12:50pm

I heard something about this book on NPR last week (someone else was getting a sales boost from a closely-named release), but I still can't quite figure it out. I had no idea it was based on twilight--or maybe that's a joke. I just came to stare at the picture of Hanna Brooks Olsen.

Supposedly it is no joke. It appeared somewhere on the internet as Twilight Fan Fiction before she pulled it down and changed the details. My girlfriend was reading a book the other day called Shades of Grey. I wonder if that guy has seen a jump in sales.

JEFFREY GRANT BARR from Central OR is reading Nothing but fucking Shakespeare, for the rest of my life June 8, 2012 - 7:49pm

Totally stealing this idea: wait for a bestseller on the kindle lists, release 3 or 4 similarly named books immediately afterward, profit.

Aw. You liked my picture.

Also, it is TOTALLY TWILIGHT FAN-FIC. I can't make up something that amazing/ridiculous.

Also, #11: Make a book with a similarly-named title and clean up like a crazy bastard because plenty of silly people would probably buy the book named 50 Shades Of GrAy (with an A). Basically, easy money. (And possibly illegal. I don't actually endorse this).

Thanks for turning my writer's frown upside down, and making me feel better about trying to be a successful, or even a liked, writer of quality. Having dabbled in the twisting of copyright law versus free use (hey - I was a 12 year old girl once), I can't bring myself to be unapologetic about producing something that is painful even for me to read, probably because I'm Canadian and we're sorry for everything...

What point that did inspire me a little was: write something that will piss people off. I like that idea. Even bad publicity, is STILL publicity.

I'm sure I'll sell out one day writing shitty vampire novels under a pen name to live off the income while I write awesome books under my real name. Until I'm discovered and am forced to become a nascar driver.

I totally support making lots of money off of hamfisted, mediocre writing. Honestly, I'm jealous when stuff like this happens.

Also, I like how you exude that "the glass is not only half full, but it's filled with tequila" kind of attitude. It's nice. Thanks for the fresh perspective too.

Ryan Hartman from Philadelphia is reading The Neverending Story by Michael Ende June 12, 2012 - 11:25am

I'd rather be rich and known for writing trite crap that's reached millions of readers than poor and fat and alone and oh god what am I doing with my life?! ...*sob*

When I first encountered this trilogy, I thought that Jasper Fforde had completed sequels to his novel Shades of Grey, mentioned above by Jack Campbell.  I really enjoyed that book, though I can't claim it was the greatest thing to grace a printed page.  And yeah, Species, while I won't deny having enjoyed some of Sasha Grey's film appearances, watching her attempt to do more than primal action in Steven Soderbergh's The Girlfriend Experience was among the most boring, misguided wastes of time on my guilty-as-charged Netflix history.

The question of art for art's sake is at the heart of this... dare I call it a phenomenon?  While there's nothing wrong with lofty ambitions of literary greatness, expecting immediate commercial success in praise and recognition of honed talent is the real unicorn.

It does make you think, if she could write a book. I CAN WRITE A BOOK!

Wow... Eragon and Twilight were both poorly written and pathetic excuses for literature too. This is not a "unicorn". And yes, we should notice it and learn from it, but we should not celebrate it. A movie should not be made of a mostly plagiarized Twilight fan fiction that is so poorly written that it spawns groups of people just to point out how pathetic it is. This woman should feel ashamed for what she's written, but instead, thousands upon thousands of lonely women eat up this smut and praise her for being untalented.

It actually makes me sad that there's so many people out there who don't care if someone does a good job rather than write a plagiarized mess and riding on the coattails of the success of an equally poorly written mess. But oh well. Good for her. She basically won the lottery, because we all know it didn't take any skill or talent for her to get where she is today.