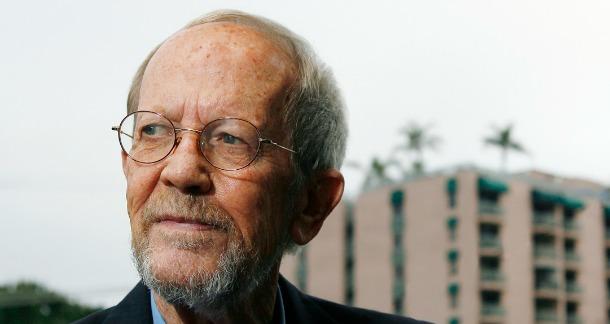 I remember the first time I came across the name Elmore Leonard.

It wasn’t on the cover of one of his forty-five novels, nor was it in the credits of one of the umpteen feature films that have been adapted from his work. It was on some shoddy internet forum I frequented as a teenager.

People shared short stories with each other on this forum. Some fiction, some creative nonfiction, all just really, really shitty. These stories had exclamation points in every paragraph. These stories had words like “exclaimed” and “opined” as tags for dialogue, and adverbs like “loudly” and “proudly” modifying those tags.

Somewhere in this gigantic clusterfuck of shameful writing, someone whose snarky username has long been forgotten commented on one of these stories. The reply, the verbatim also long forgotten, said something about Elmore Leonard thinking that exclamation points were shit, anything other than “said” as a dialogue tag was shit, adverbs to modify those tags were shit, and that if he were there, on the forum, Elmore Leonard would tell the author to go fuck himself or herself.

I don’t know if Elmore Leonard would have said that. I like to think he would have, but he seemed like a kind, encouraging, stand-up dude. He really did hate exclamation points and anything other than “said” as a dialogue tag and any adverbs modifying those tags, though. That part was damn true, and that’s great advice for any writer out there.

Another piece of great advice for any writer out there: READ ELMORE LEONARD. He's one of the greatest novelists of not only our time, but all time.

Here’s 10 books from the late, great author they called "Dutch" to get you started. 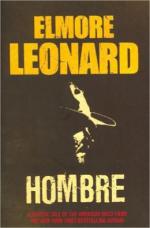 Elmore Leonard is well-known for his crime-ridden mysteries, and deservedly so. But the man also wrote Westerns like he was the bastard son of Charles Portis and Sergio Leone.

Hombre, Leonard's fifth novel, received heaps of praise when it was published in 1961, and is now considered a classic of the Western genre. The book follows a half-Apache man named John Russell who, after his stagecoach is attacked by outlaws, must decide whether to save himself or the group of whites he's traveling with, all of whom resent him for his half-blood.

A classic literary tale rife with both internal and external conflict, Hombre first made me take notice of the Western genre as a young reader. Everything else paled in comparison.

Excerpt: Right then you suspected he was more to those Apaches than a friend or a boss. I mean he could be a blood relation, no matter what his name was, and nobody in the world would bet he wasn’t. When Mr. Mendez spoke to him you believed it all the more. He stepped closer to John Russell’s roan horse, and I remember the first thing he said. He said, 'Hombre.' 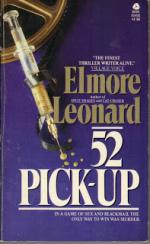 Harry Mitchell doesn't get mad. He gets even.

That's one of the loglines from Leonard's eleventh novel, an exhilarating thriller about a Detroit businessman (Mitchell) who finds himself cheating on his wife for the first time. Just so happens some creeps have filmed the affair and try to blackmail Mitchell for a hundred grand. But as the logline says...

If Hombre is a classic literary tale, this is a classic Leonard tale: simple plot, sharp dialogue, compelling characters, and murder.

Excerpt: Even with the stocking over his face the man’s words were clear. He said quietly, 'Take a seat, motherfucker. It’s home movie time.' 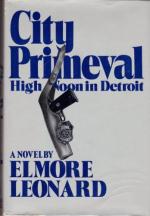 The old Western set-up of a showdown between Good Guy and Bad Guy is executed flawlessly here by Leonard, in one of his most underrated books.

Homicide detective Raymond Cruz is hell-bent on putting away Clement Mansell, the "Oklahoma Wildman", for good. And by for good, yeah, he means he wants to murder him. Mansell has it coming too, at least in Cruz's eyes. Mansell has gotten away with murder in Detroit before, and now he's murdered a shady judge, which doesn't bother Cruz so much as it does that Mansell's getting away with murder in Cruz's town.

It's another of those typical Leonard stories where a good guy has to do bad things. City Primeval is one gritty sumbitch, for sure. 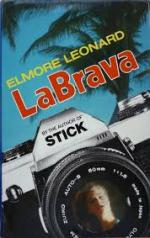 Leonard went on to win several lifetime achievement type of awards from various organizations, but his only novel to win an award was this one, which took home the Edgar Award for Best Novel in 1984.

The seedy shores of South Beach are the setting for this rollicking, noir-esque tale about Joe LaBrava, a former Secret Service agent now guarding his boyhood crush, movie star Jean Shaw, famous for her low-budget B-movies back in the day. But LaBrava may have bit off more than he can chew taking on this assignment. Turns out Shaw's exploits on the big screen aren't too different from her life off screen.

LaBrava is widely considered one of Leonard's best novels. It may be the best. See for yourself.

Excerpt: 'You oughta hand out purgatives with that shit, Evelyn. This guy’s for real, and he’s gonna make it. I guarantee you.' 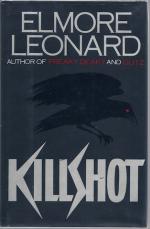 One of Leonard's simpler novels, where the heroes are just a suburban couple on the run from a pair of deranged con-artist hitmen. It sounds ordinary, but Leonard's prose proves otherwise.

Excerpt: The voice on the phone said, 'Hey, Chief? Fuck you. I’ll get somebody else.'

This guy was a punk, he had to talk like that. It was okay. The Blackbird knew what this guy and his people thought of him. Half-breed tough guy one time from Montreal, maybe a little crazy, they gave the dirty jobs to. If you took the jobs, you took the way they spoke to you. You spoke back if you could get away with it, if they needed you. It wasn’t social, it was business. 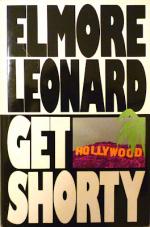 Get Shorty is a rarity in Leonard's bibliography: it doesn't end all that bad.

If you don't know the story of Ernest "Chili" Palmer and Ray Bones from the 1995 film of the same name, pick up this book immediately. Palmer's a cool cat, man, but he's got issues. Namely Bones, his boss, who he roughed up 12 years earlier, and Leo Devoe, a dead guy who isn't all that dead and owes Bones some serious coin.

Excerpt: Chili said, 'You see a black leather jacket, fingertip length, has lapels like a suitcoat? You don’t, you owe me three seventy-nine.' The manager told him to look at the sign there on the wall. WE CANNOT BE RESPONSIBLE FOR LOST ARTICLES. Chili said to him, 'I bet you can if you try. I didn’t come down to sunny Florida to freeze MY ass. You follow me? You get the coat back or you give me the three seventy-nine my wife paid for it at Alexander’s.' 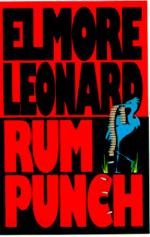 Quentin Tarantino forever immortalized this story in the wonderful Jackie Brown, which starred Pam Grier as a sultry flight attendant who runs money for Ordell "Whitebread" Robbie, an illegal weapons dealer dealing to the wrong dudes.

Leonard's novel fit Tarantino's thematic style well. Rum Punch is like the Inception of small-time scams with big-time consequences. There's dupes within dupes, twists and turns inside twists and turns. A definite must read.

Excerpt: Not long after that Louis went to Texas, where he took another fall. Came home and Ordell had a proposition for him: a million-dollar idea to kidnap the wife of a guy making money illegally and hiding it in the Bahamas. Louis said okay. The scheme blew up in their face and Louis said never again. Thirteen years ago… And now Ordell had another scheme. Louis could feel it. The reason they were here watching skinheads and coneheads marching up the street. 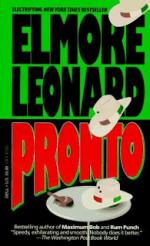 A double dose of Raylan Givens, who happens to be pretty famous in FX's hit drama Justified.

Leonard introduced Givens in 1993's Pronto and brought him back two years later in Riding the Rap. Fans of Justified will thoroughly enjoy these two books. Givens looks even more ruthless and badass on Leonard's easel.

Excerpt from Riding the Rap: The marshal, Raylan Givens, said, 'If you’re gonna talk I’ll put you in the trunk and I’ll drive.'

So neither of them said another word until they were south of Orlando on the Turnpike, 160 miles to West Palm, Dale Junior staring straight ahead at the highway, flat and straight through Florida scrub, boring, holding it right around sixty so as to make the trip last, give him time to think of a move he might try on the marshal. 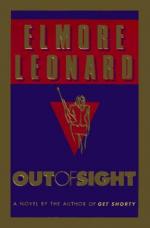 Yeah, George Clooney and Jennifer Lopez made this book famous, but Leonard's inconceivable love story about a thief on the lam and the U.S. Marshal hot on his tail is sexy, stylish and full of shotguns.

Steven Soderbergh's 1998 feature film adaptation of this book, which starred Clooney as career criminal Jack Foley and Lopez as U.S. Marshal Karen Sisco, was faithfully translated from the source material. The story pretty much plays second fiddle to the dialogue, which is full of boisterous flirtation, a bit of comedy and lies lies lies.

It's a slick flick, and a slick novel, in the vein of anything Tarantino's done.

Excerpt: Foley had never seen a prison where you could walk right up to the fence without getting shot. 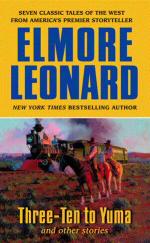 Three-Ten to Yuma and Other Stories

Maybe Dutch's most famous story, "Three-Ten to Yuma," is another of those grimy Westerns that he penned early in his career. It first appeared in Dime Western magazine in 1953, and was later adapted into two movies, both of which were well received by critics and moviegoers alike.

Clocking in at only twenty-some pages, "Three-Ten to Yuma" is one of the most compelling stories you'll find of any length. Leonard manages to craft some of his most memorable characters in Deputy Marshal Paul Scallen and his prisoner, Jim Kidd, with virtually no backstory and little plot.

"Three-Ten to Yuma" is collected here with six others stories: "Long Night", "Jugged", "The Kid", "Cavalry Boots", "Under the Friar's Ledge", and "The Captives", which may be the best of the bunch.

I should say this really isn't a definitive Elmore Leonard list. But it's my definitive list, and it's a great introduction to him. Honestly, the man wrote forty-five novels and numerous short stories, so there's plenty of places to start. But these ten titles stood out to me the most because it's a great sampling of what Leonard's style tastes like.

Got another favorite Elmore Leonard book? Let me know in the comments below.

Great list, Ryan.  I've read about half of Elmore's books, but somehow, you've got a few on here I haven't checked out yet: LaBrava, Get Shorty and Hombre, to name a few.  Will have to get on that.

52 Pick-Up is a must read indeed.  And such a quick book to get through.  The Frankenheimer adaptation isn't that bad either.  Other favorites: Unknown Man #89, Maximum Bob and Cuba Libre.

This is a great list. Most of my personal favorites are on it.

You have added to my reading list for sure. Personal favorites are Kill Shot, Rum Punch and his westerns.