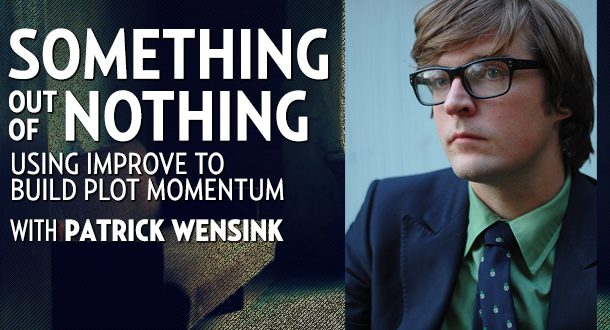 In this three-week workshop, use the tools and tricks of improv comedy to build momentum in your stories and write stronger plots.

Your Instructor: Patrick Wensink, author of 'Broken Piano for President'

Staring at a blank page, even with a great story idea tucked inside your mind, can be one of the most intimidating experiences imaginable.

Except for maybe another one: Staring at 50 pages of a stalled story with no clue where it's going, or even where it's been.

Talented, creative people can suffer stage fright in front of the keyboard. By using improv techniques and exercises, this class will show students how to trust their instincts and build a compelling story or novel from nothing but a few fragments—or even nothing at all.

Improvisational theaters like Second City and Upright Citizens Brigade teach a basic set of principles that allow performers to create stories from nothing, featuring rounded characters, interesting plots and, most importantly, momentum. Patrick Wensink has been a member of Louisville improv legends Project Improv for more than four years, and he'll share the basic principles he learned on stage as an improv comedian—and on the page as a bestselling novelist.

The goal is to eliminate the dread from a blank page and convert it into an endless canvass, by instilling the confidence that is an absolute must in improv theater.

We ran this class earlier in the year, and it proved so popular that, not only are we bringing it back, but we're adding another week of instruction!

Like always, we had nothing. We asked for a word of inspiration.

My partner, Emily, and I were standing onstage with our heads completely empty. I hadn’t thought about Twain since high school and I doubt she had either.

There was a beat of silence. You could hear a guy clear his throat. Someone’s ice shuffled in their glass. That nervous quiet weighed a ton.

Emily and I were doing an improv show with our troupe. We had to entertain a roomful of people with only “Mark Twain.” The crowd expected us to build a whole story with realistic characters and a believable setting and a compelling plot. Plus, we were supposed to make them
laugh.

With three quick lines we had the foundation of a story.

We had absolutely nothing in the tank, but we weren’t panicked. We prepared for this cold start and, frankly, we kind of savored it. We trusted ourselves and knew the best material comes from a blank slate.

“Mark Twain…Mark Twain…Mark Twain,” I said in an accent I’d never used before. I started with nothing, but that quickly changed. This unfamiliar accent sounded like a guy in prison to me. Ah ha! I thought. “The prison library sucks. All they have is copies of Tom Sawyer.”

“Yeah, Sanchez,” she said. “That book’s horrible. You can’t hide a spoon inside of it or nothing.”

With three quick lines we had the foundation of a story. From there, we built a 10-minute skit about inmates. Sanchez wanted out of the big house. Carl, surprisingly, just wanted to eat Sanchez. The audience got what it came for, laughs included. Two minutes before the scene, Emily and I had never thought about cannibalism or jail breaks. But we knew a few simple improv rules and trusted our instincts.

After the applause, standing to the side of the stage, I realized something that never occurred to me before: This is just like starting a novel from scratch.

WEEK 1: Making Something Out of Nothing

Opening a story by utilizing these techniques will set the stage for a book or short story that has the momentum to push beyond any 50 page stall, and is sturdy enough to embrace literary surprises as they appear.

Ever wonder how folks at improv groups like Second City or Who’s Line is it Anyway? can construct interesting characters and vivid storylines on the spot? Because of one simple rule in the improv handbook.

Students stuck on a story or wrestling with writer’s block will see their work instantly take off and veer in unforeseen directions by applying this major improve rule to their fiction.

And the second-biggest rule will teach students to cut out a character’s quizzical nature and make them action-oriented, which gives stories that momentum readers can’t put down and writers can’t stop writing.

You’ve done it! You’ve learned the principles of theatrical improv and know how to apply it to your fiction. It’s time to relax and put your head into a guillotine: The Harold.

The Harold is the epitome of long-form improv. It’s a highwire act of improv chops that seamlessly weaves three separate stories together, lasting (on stage) anywhere from 30 minutes to an hour. Using improv’s touchstones to complete this complex story form makes an improviser feel like they belong in MENSA. It’s also perfect for creating a dynamite work of fiction.

Part class lecture. Part ultimate homework assignment. Using your improv skills to write a Harold will be a fireworks display celebrating your newfound trust and writing skills. Once you’ve mastered The Harold, traditional 3-part story arcs will look like The Pokey Little Puppy.

* Each week will include writing assignments to be critiqued by Patrick and your classmates, as well as discussion forums.

Patrick Wensink is the bestselling humorist and author of five books. NPR named his most recent novel, Fake Fruit Factory, one of the best books of 2015, calling it "Twin Peaks meets Scooby-Doo." His humor writing appears in the New York Times, Esquire,...

"Drawing a blank? Your story going nowhere? Then sign up for this class now and be free." —Clyde P.

"Excellent class! Patrick Wensink was a great instructor. He provided very detailed feedback and elaborated on writing principals that can be applied to any genre." —Jimbo

On Broken Piano for President...

"[A] psychedelic trip of a novel" —Publisher’s Weekly

"Broken Piano often reminds me in ways of [Nick] Cave’s last novel, The Death of Bunny Munro." —The Fanzine

"The book is chock-full of sharp wit and punk irreverence and is a guaranteed treat for all enemies of Jonathan Franzen." —Esoterrorist