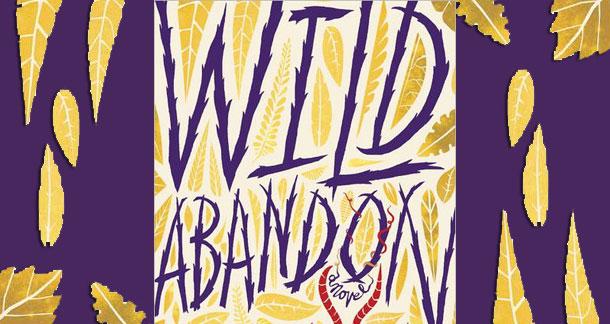 After the success of Submarine as both a book and a movie, Welsh author Joe Dunthorne continues to carve out a niche for himself in whimsical relationship comedy with his sophomore effort, Wild Abandon.  It’s very much a novel of our times, addressing dinner party chattering points from wind power to recycling to legalizing dope to education.  Even the briefest plot summary establishes its quirky, here-and-now credentials: in essence, it charts the progress of a spring awakening at a Welsh commune.  How very twenty-teens.

For the bedraggled group of residents and volunteers at Blaen-y-Llyn, sustainable living isn’t as much fun as it used to be.  Numbers are down, newcomers few and far between, and the sense that they are living on an innovative edge is long gone.  Everyone grows their own these days.  And, in these days of instant internet feedback, word gets around if even one of the wwoofers (the young volunteers from World Wide Opportunities on Organic Farms) has an ax to grind.

Blaen-y-Llyn has certainly lost its charms for Kate, the seventeen year-old daughter of the commune’s founders, Don and Freya.  She’s already taken her first steps towards quitting, opting to finish her studies at a local college, as opposed to home schooling to the bitter end (in her case, a place at Cambridge).  She experiences daily pangs of guilt at leaving Albert, her needy eleven year-old little brother, at Blaen-y-Llyn as she cycles into a different world.  At college she eats canteen food, soaks up Politics and History, and indulges in “logistically awkward heavy petting across the bucket seats” of her boyfriend’s Fiat Punto.

Albert’s left to fill his days with wandering between the polytunnels, the geodesic dome, the pottery and the vegetable garden. His constant companion is six year-old Isaac, the two of them lumped together as the commune’s only kids.

It was a long way from when Kate was her brother’s age and the community was awash with bright, multilingual children with dazzling names. (Stand up, Elisalex De Aalwis.) …Their education had peaked with Arlo’s now infamous class on cinquecento Italian architecture, which involved a high level discussion of the villas of Palladio alongside an ambition attempt to build “La Rotunda” from Lego.

The best Albert and Isaac can hope for these days is a clumsy media studies lesson on TV ads (“the important thing to remember is that adverts are not bad, per se.  You’ve just got to know how to handle them”).  It’s better all round if Albert is left to educate himself.  He spends a lot of time asking questions of Marina, Isaac’s mother and a relative newcomer.  Marina believes in the approaching apocalypse as predicted by the Mayans for December 21st, 2012.  Albert falls on her muddy account of a supermassive black hole, a twenty six thousand year orbit, and a final eclipse like a tyrannosaur on a fresh kill.  For a kid who’s rarely seen what’s beyond the next hill, the end of the world, replete with zombies, explosions and objects whizzing through the sky, is almost too exciting to bear.

His father, Don, isn’t so amused by Marina’s tales.  Like most men who are anti-establishment in their youth, he has wound up being an establishment in his middle age, and resents anyone who tries to shake his walls.  Despite being ersatz king of the compound (no one else would be willing to take on the job), he’s no Koresh or Manson wannabe, and has no desire to lead his followers into the Rapture.  Don’s happiness comes from everything continuing as he’s set it up, from the interview questions given to prospective residents, to the grading of electrical appliances to regulate their use.  He would never admit to his own control-freak, stick-in-the-mud tendencies, but they’re obvious to all the other residents of the commune.  His tics most irk those who’ve had to put up with them for the longest: his wife, Freya, and their friend and co-founder, Patrick.  Both these two are almost at breaking point.

When Patrick ends up in hospital after a massive marijuana overdose (it can happen, and he wrecks his ankle in the process), he sets off a chain reaction.  Kate also flees the coop, to the materialistic comfort of her boyfriend Geraint’s suburban family, and Freya seizes the opportunity to move her and Albert away from Don’s baleful glare, into a mud yurt.  Having resisted change for so long, Don has to confront it all at once.

Like many life-crisisers before him, Don decides he’s going to fight for his rights by partying.  He shaves off his beard in a theatrical ceremony, and plans a consciousness-raising rave to lure in new recruits.  That’s right: he’s going to restore his family, self-respect, and past glories by hiring a couple of DJs and hoping the local kids will bring their own glow sticks.  How can it possibly go wrong?

Eschewing the adolescent interior monologue of Submarine that drew a range of comparisons from Salinger to Sittenfeld, Dunthorne weaves his plot from the triumvirate perspectives of Kate, Albert and Don (and, for a few pages, Isaac).  These are three very confused people, and much of the novel’s entertainment value comes from their failure to connect with others or understand the truth of the situation they are in.  Dunthorne has a keen eye for the way we disappoint ourselves and one another.  Whether it’s Kate’s overconfidence that she can seduce an older man, or Albert’s posturing as a rooftop harbinger of doom, this writer knows how to rain on his creations’ parades.

The tone throughout the novel is one of faint disapproval and disappointment, as incident after incident illuminates the gap between who the characters are and who they would secretly like to be.  The reader is encouraged to chortle at the disintegration of almost everyone’s dreams, although the more resourceful characters, like Kate, manage to carve out an alternate, and hopeful future. Unfortunately, even as the party builds to a chaotic, drug-fuelled climax, the Schadenfreude doesn't go far enough.

When Wild Abandon doesn’t work, it’s because it’s too nice.  Comic novelists from Charles Dickens to David Lodge have appreciated that humor should be streaked through with humiliation, that readerly satisfaction comes from sustaining cruelty towards certain characters to the very end.  We all love a good come-uppance. Dunthorne ties himself in knots trying to find a happy ending for even his minor characters, when he should be hanging at least one or two of them out to dry.   Although there are moments of unpleasantness – particularly when Albert gets hold of the bolt gun designed for slaughtering goats -  the narrative never manages to incorporate the kind of genuine antagonism that would give it a cutting edge.  This is community living as viewed through a grubby, but nonetheless rose-tinted lens.  Despite the winds howling across the Welsh hillside, life at Blaen-y-Llyn is ultimately cozy: it's the exact antithesis of that other recent pop-culture examination of commune life, Martha Marcy May Marlene.

Nonetheless, Dunthorne knows how to build and populate an enclosed, unusual world, one that's evocative of a campus novel, but constructed on a much smaller scale.  If a couple of hours of gentle escapism laced with wry social commentary on the foibles of our time is your idea of wild abandonment, by all means, go ahead and volunteer.