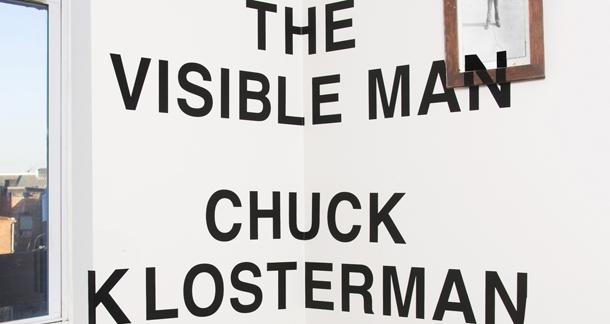 Who are you when you’re alone? Are you someone else in a crowd? Is the reality of you fundamentally diminished by the perception of others?

Journalist, essayist and pop culture anthropologist Chuck Klosterman’s second novel, The Visible Man, pulls a pretty slick con on the reader. The book presents itself as a dark sci-fi thriller, riveting and fun, while asking profound questions about the fallacy of scientific observation and the perpetually fleeting nature of reality.

Austin therapist Victoria Vick is stumped by her newest patient; a brilliant, narcissistic scientist she refers to as Y__. Y__ claims that he has mastered the ability to become nearly imperceptible to the human eye. Through the invention of a sheer suit that reflects light, covered in a viscous cream that captures and moves the light, Y__ can appear “cloaked,” or damn near invisible. He uses this ability to observe humans in their truest condition—when they believe they are completely alone. Naturally, Victoria believes Y__ is suffering from egocentric delusions…until the day Y__ wears the cloaking suit to Victoria’s office and her entire universe shifts. Victoria finds herself jeopardizing her career and marriage in her desire to learn more about this fascinating patient.

It’s a clever hook, and the novel certainly draws the reader into the story with ease. Through a series of notes we learn that Victoria is pitching a manuscript to Simon & Schuster about Y__, and the majority of The Visible Man’s narrative is made up of session transcripts, e-mails, and Victoria's personal notes. Y__ gives long, detailed descriptions of the solitary lives of those he has observed—Bruce and Dave and Valerie—and along with Victoria, we learn much about human nature and about Y__ himself through his discourse. The story is well presented in this format, as Y__ insists on dictating the direction of his therapy sessions, and he therefore dictates the direction of the narrative. We learn about Y__ solely through Y__, and we soon begin to wonder if Y__’s version of events can be trusted.

But The Visible Man is much more than a clever hook. Klosterman clearly uses Y__ to voice his own frustration with the futility of journalistic interviews as a tool in revealing human nature. Y__ decides he must use his cloaking suit to observe strangers in their most intimate moments of solitude, because “the act of asking someone a question completely destroys the value of the answer.” In order to truly observe and know, that which is being observed must be entirely unaware of the observation. Y__ references Heisenberg’s Uncertainty Principle, which essentially states, “The very process of examining something changes what that something is.” It’s an impossible problem. The life you witness as a casual or even pointed observer is a simulacrum of reality, because your very observation is making an impact on the circumstances.

Y__’s observational exercises lead him to a wealth of insights into the human condition, a forum for Klosterman’s own keen perception redefined as pithy commentary. On the Internet: “It remove[s] present tense happiness while facilitating the possibility for future joy.” On the cultural impact of technology: “Everything science gives us immediately becomes normative[…]Because humans live finite lives, all technological advances immediately feel banal to whatever generation inherits their benefits.” On the tenacity of gender clichés: “I mean, just watch any husband arguing with his wife about something insignificant; listen to what they say and watch how their residual emotions manifest when the fight is over. It’s so formulaic and unsurprising that you wouldn’t dare re-create it in a movie.” On television: “Television is a form of one-way entertainment, but that’s not how people want to think about it. They want to believe they’re somehow involved. This is why they talk back to the TV […] They believe their personal experience within television affects what television is. But television is the only place where this belief exists. Within their actual life, they feel powerless […] They assume they have no control over anything, so they don’t even try. They perceive reality backward.”

The Visible Man is a novel that makes you think about your life. It makes you think deeply about the person you are when you are alone and the person you are around others. It also creates its own problem: if after reading this novel, you don’t start behaving in a more self-conscious manner when you’re alone, remotely aware that a hypothetical invisible man may be observing your every move, you are less impressionable than I.

Y__ is a fascinating character--and an utterly unlikable one. He’s pompous and self-involved. He says obnoxious things like, “I would never refer to myself as a ‘renaissance man’ although I suppose that’s precisely what I am.” YOU JUST REFERRED TO YOURSELF THAT WAY. Just now! But Victoria is also deeply flawed. Her sessions with Y__ become unsettling very quickly. She loses professional detachment, immediately relinquishes the upper hand to Y__, and makes a series of questionable choices. The reader knows to ask from the first chapter, “What happens if Y__ decides he wants to spy on Victoria?” but she never makes that leap. Ever. It’s frustrating and Klosterman doesn’t make it any easier on the reader to sympathize with Victoria, because the first piece of personal information we receive about her is on page 149 of 230. Victoria is not the point of this novel, but when the game changes and Y__’s motives come into question, it’s hard to care what happens to Victoria or her husband, because we scarcely know who they are.

The setting remains similarly undeveloped. Klosterman places the action in Austin, Texas, but it all seems sort of pointless. He talks about the Congress Bridge bats, South by Southwest, the Longhorns, the capital building—a tourist’s view of Austin. Maybe this former Austinite is judging too harshly, and I’ve never believed that authors should only write what they know, but the city scenes feel hollow and inauthentic.

Unfortunately, Klosterman’s casual disinterest in his own narrator and setting keep The Visible Man from being a truly great novel. Still, it’s a seriously good one. It’s juicy and enthralling, littered with pop culture references that serve to enrich the narrative rather than weigh it down. And more importantly, it’s a deeply insightful novel that asks intriguingly unanswerable questions about the attraction of voyeurism, scientific ethics, the ramifications of popular media, and the fundamental slipperiness of what we perceive as reality.

Y__ balks at Victoria’s use of the term “invisible.” “There are invisible people in plain sight, Victoria. Most of the world is invisible. I wanted to see the visible man.” Through Y__’s eyes, Klosterman’s shrewdly perceptive vignettes detailing the hidden life of the everyman reveal just that.

Joshua Chaplinsky from New York is reading a lot more during the quarantine October 10, 2011 - 10:24am

I know what I'd do with the power of invisibility (hint: it involves naked ladies.) Anyone else?

This reminds me of an episode in the series Neo Genesis: Evangelion; episode 20 I believe.  The main character Shinji, is in a state of psychological shock and has a conversation with himself about how there are multiple versions of himself.  His "true self" being who he is when he's alone. All the other versions are how everyone sees him.  There's an Asuka-Shinji, a Rei-Shinji, and so on.  Really great series.

The Visible Man sounds great too.  I'll have to put it on my reading list.

“I would never refer to myself as a ‘renaissance man’ although I suppose that’s precisely what I am.” YOU JUST REFERRED TO YOURSELF THAT WAY. Just now!

made me laugh out loud.

or Berger's Being Invisible, and probably a bunch of others.

I like the idea, but picking it up just now, I find myself a little put off by the structure.  There's something about using letters and memos and the like as a narrative format that makes me wish the author would drop the fancy stuff and just tell the story.  Probably one would get used to the technique as the reading progresses, but I'm not finding it to be a particularly good "grabber" to make me want to read further.

I've read a few of Klosterman's books, and his column on Grantland, so I was interested to see how this book was. Thanks for the review. I'm going to pick it up now.

fport from Canada is reading The World Until Yesterday - Jared Diamond November 6, 2012 - 9:21pm

When confronted with a reality that has not been apparent to that moment is it hard to believe that we might react badly? I didn't have to wonder how Victoria had been chosen or if she was as much a subject as any that Y__ took up with I just knew. He was upping the ante, evolving if you will and experimenting with how much the observer changes the situation as evidenced by his mention of other trained therapists he had interacted with. I didn't wonder where his conditions for talking and meeting came from, it was most certainly previous observation of such situations and then moving to the interaction phase. This was a fine read. Not epic but satisfying in a number of ways.