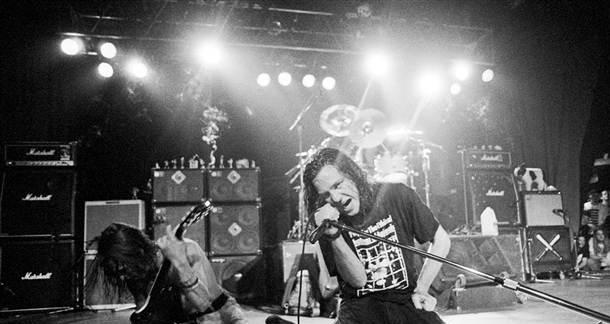 Rock and roll was born in the 1950s. It got downright sassy in the 60s, pounded its chest and roared in the 70s and went way over the top in the 80s, leaving everyone channeling their inner Peggy Lee and asking, “is that all there is?”

That short-sighted question was dismissed with a titanic “hell, no!” when the 1990s ushered in music’s first great renaissance- a decade of unparalleled expansion across the industry, from the quality of songwriting to how music was produced, to the very method of serving up music to the masses. In 1990 music was all about the CD, but by New Year’s Eve, 1999, the notion of driving across town to a record store to drop fifteen bucks on a physical disc was as laughable as Milli Vanilli’s Grammy Award.

Nostalgia purveyors like MTV offshoot VH1 love to define the 90s as the decade in which grunge dispatched hair metal. Indeed, that station can scarcely broadcast any original content without some 80s rock refugee or D-list comedian restating this observation with a sense of profound discovery. When I see these clichés so exhaustively revisited and presented as cultural insight, I understand why Elvis Presley felt compelled to shoot his television.

It’s not that there isn’t truth to the notion that from a purely commercial perspective, grunge unseated 80s glam as the preeminent genre of guitar-based rock. But reducing the 90s to this singular event is a grotesque over-simplification along the lines of viewing the Big Bang as the process that created the moon.

When the 90s took off, music erupted into a mind-blowing array of new sub-genres. The birth of electronica inspired the Ecstasy-fueled rave culture that later fractured into its own delta of musical rivulets. Rock and metal broke out into movements like grunge, nu-metal, black metal, and industrial. Funk and rap yielded a gang of styles that aligned geographically, with West Coast and East Coast musicians breaking into an explosive turf war for the ears of fans. Pop absorbed a little bit of everything and made a killing, right up to the point where Napster combined the power of broadband Internet with digital music formats, delivering a lethal injection into the arm of the music industry.

As the game changed for the players, so did it transform dramatically for those who chronicled it. The barriers to publication were removed by the Internet, allowing anyone with a dial-up connection to publish articles about music, releasing a supernova of electronic opinions across the globe. This new model presented music journalists with an unthinkable proposition- like the artists themselves they would have to reinvent what they did or perish like a one-hit wonder.

Enter literary time capsule, The 90s: The Inside Stories from the Decade That Rocked, a dense, slickly packaged “Best of” collection of original articles published by Rolling Stone magazine throughout that decade.

Carved up into eight chapters, one for each of the decade’s most popular genres (grunge, alternative, hip-hop, metal, “Girl Power,” jam bands, electronica and pop), and two miscellaneous chapters (“Superstars” and “Only in the ‘90s”), the volume is an exhaustive collection of essays devoted to the most popular artists of that era. There is a year-by-year breakdown of the top (read: “most commercially successful”) music and a sample of each year’s music headlines. It concludes with the unavoidable list of the top 100 albums of the decade, which will incite music fans the way that only lists can.

The quality of writing is, across the board, superb. Say what one will about Rolling Stone’s predilection for awarding covers to socialites and television stars, when it comes to music, its standards are unparalleled. The authors represented in The 90s are a “Who’s Who” of rock journalists like Neil Strauss and David Fricke, whose contributions are insightful, informative, and entertaining as hell.

The 90s tends to focus only on the mainstream acts of the day and is therefore hardly definitive. The “Grunge” chapter, for example, is limited to four articles (“Pearl Jam,” “Seattle,” “Soundgarden” and “Kurt Cobain”), ignoring Seattle behemoths Alice in Chains and seminal acts like Mudhoney and Tad.

Each section kicks off with an introduction from an icon of the genre (Perry Farrell contributes the introduction to “Alternative”), which are frustratingly brief and as such, devoid of substantive insight. Restricting Moby to less than 200 words of commentary on the meteoric rise of electronica in the 90s borders on a human rights violation against fans.

Most disappointing is the conspicuous absence of cultural analysis of the articles themselves, which were reprinted as they were originally published, without looks back from the authors or subjects. They are introduced with a one or two-sentence overview that occasionally adds a forward-looking tidbit (i.e. “that album went on to sell X million copies...”), but the analysis ends there. Because the subjects of the essays are now so deeply entrenched in our consciousness most readers will already know what happened to them after the articles were published, giving the pieces an unintentionally naive hue.

For example, Kim Neely’s 1991 journalist-on-the-road-with-the-band piece about Guns n’ Roses asked “Is the world’s most explosive band about to self-destruct?” Anyone not in an underground cave on Mars during the last twenty years already knows that they did, in fact, self-destruct from the dueling pressures of drugs and ego, and that the only original member still in the band is Axl Rose. To read the piece now feels like reading a February, 1912 article about the Titanic titled, “Is This The Greatest Ship Ever, Or What?” Supplemental comments from the author about their experiences writing the piece or some follow-up as to what transpired in the wake of the essay could have lent the material a satisfying sense of perspective and in some cases, closure.

The book’s introduction by Brian Hiatt is a decent attempt at placing the decade in context, noting that in the 90s “the president got the groupies, and the musicians got shot (Tupac Shakur, Notorious B.I.G.).” But the most substantive examination of the decade’s music occurs in the list of 100 albums, where each disc is given a hundred or so words on why it made the list and how the album relates to previous or subsequent efforts of that artist.

Perhaps The 90s is not intended as a meaningful appraisal of that decade (although Hiatt observes that “Not since the Sixties had music mattered so much, or the stakes felt so high”), but if so, then what is the book’s point, and for whom is it intended? Certainly not for devotees of an artist or a particular genre such as hip-hop or metal. Good luck convincing a thrash metal fan to pick up this book for the six page Metallica article, while ignoring the other 270 pages about artists like The Backstreet Boys, Hootie and the Blowfish, and Sinead O’Connor.

Ultimately, with an oceanic amount of subject material and limited amount of space, the book can at best offer drive-by glances of select events from the 90s. Which suggests that this book is not so much about the artists or their stories, but about the magazine and journalists who were there to capture them. Hiatt even notes, “It was a great time to be a music journalist. There were no shortage of tales to tell.”

If you want a primer on music journalism, look no further. But music fans will be left wanting far more. While the subjects are compelling and the stories well-told, this glossy stack of musical postcards is for nostalgia fans only.

Talk about a solid review - you almost make me want to pick this up. Based on the breadth of the material, it sounds like it would make a great book for the coffee table.

Restricting Moby to less than 200 words of commentary on the meteoric rise of electronica in the 90s borders on a human rights violation against fans.

Joshua Chaplinsky from New York is reading a lot more during the quarantine October 25, 2011 - 8:08am

I disagree about the 90s being the last gasp. It's like any other decade- people who grew up in it tend to remember only the good, but 90% of the 90s was crap. Sure, you got Pearl Jam and Soundgarden and Nirvana, but there was also a glut of shitty copycat bands and one hit alternative wonders.

It's like when people opine for the heyday of 70s filmmaking. A lot of seminal films came out of that decade, but there was also an amazing amount of hackneyed shit. Studios and record labels might not be as willing to take chances these days, but that doesn't mean there isn't greatness to be found. You just have to look a little harder.

you guys remember Smash Mouth? If you do I'm sorry.

I've never been an avid reader of Rolling Stone because it's a little too superficial for my tastes, despite the great writing. Still this does look pretty neat. Great article.

Though it is generally some of my favorite music, the 90s seems to be the most notable era of "catch-all" terms like grunge and alternative as opposed to actual genres.

Thanks, all- a fun decade to consdider, especially in view of the Mojave-like landscape of the ten years that would follow.

Postpomo- I couldn't agree more- the 90s were the final gasp before the music industry went into hospice care. On my Facebook page, I regularly post polls such as "Who was the greatest band of this decade" or something to that effect. Yesterday I asked what the best album of the Noughties was, and the answers were far-fetched and anemic. No one had anything approximating a definitive answer. I'm looking forward to seeing how this decade plays out- at least there have been some interesting releases in the past two years in a couple of different genres.

Renfield- I can't believe you just made me picture Smash Mouth. Oh, man, it feels like third degree burns inside my brain.

Joshua Chaplinsky from New York is reading a lot more during the quarantine October 25, 2011 - 1:41pm