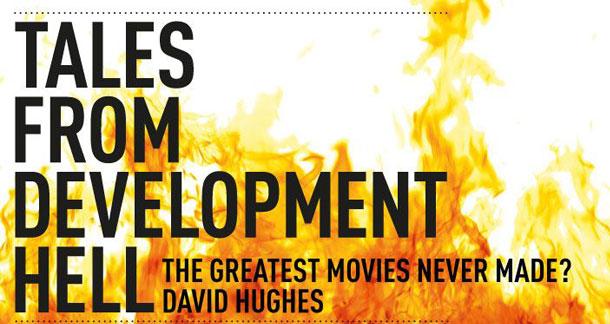 Aspiring writers dream of the day they sell their first screenplay.  But for many, that day is only the beginning of a long waking nightmare, drawn out over years, as their beloved creation is battered, eviscerated, and rewritten by drooling barbarians.  And there are no guarantees that their story, in any form, will ever make it to the screen. Instead, it will remain mired in Development Hell.

Author David Hughes has updated his 2004 tome on the topic, Tales From Development Hell - The Greatest Movies Never Made? This densely-researched but very readable book highlights the fact that at any given moment, in Hollywoodland, there are hundreds of thousands of screenplays- many of them much more sophisticated and enthralling than the dreck clogging your local multiplex- languishing in unproduced limbo. He also provides new details on the fate of some long-time residents of Development Hell, most notably how Rise Of The Planet Of The Apes undid the damage wrought to the franchise by Tim Burton, and how Indiana Jones and The Kingdom of The Crystal Skull came to 'nuke the fridge'. Abandon hope all ye who enter here, and be surprised at the high profile film-makers who’ve had their projects pass through the gates to oblivion.

Hughes, who is both a film journalist and an unproduced screenwriter, outlines the process of development thus:

1. The writer turns in a script so unutterably perfect they would stick pens in their eyes sooner than change a single syllable of it.

2. The producer or studio executive, too busy/bored/illiterate to read the script for themselves, sends out for ‘script coverage’ — advice on the potential of the script from a professional script reader. If this doesn’t instantly lead to the script being junked and the writer being fired and replaced — either by a younger, hotter, cheaper model (a ‘tyro’), or an older, more experienced and more expensive one (a ‘veteran’) — the writer will be given ‘notes’. “Everybody gives writers notes,” says screenwriter Richard Friedenberg (Dying Young, A River Runs Through It), “[even] the garbage man. And the notes always conflict.”

3. If sufficiently encouraged to do so, the producer/executive might then actually read the script. “This is perfect,” he (or, one time in a thousand, she) might say. “Who can we get to rewrite it?” Then, in order to justify their own on-screen credit/exorbitant salary/job title/parking space, they will throw their own ideas into the mix or, more commonly, take ideas out. “In Hollywood, ideas are anathema,” says screenwriter-producer Gary Goldman (Basic Instinct, Total Recall, Minority Report), “and the bigger the budget, the more forbidden they are.

4. The writer then scurries away to rewrite their magnum opus, doing their best to incorporate all the different, conflicting notes, and resubmits the script for approval.

And repeat, ad infinitum, with endlessly varying combinations of writers, directors and stars, who all want to put their own stamp on the script.  It’s not the most efficient, fair or even creative process, but, kiddo, that’s the way the industry works.  If you don’t like it, go crowd-source your screenplay on Amazon.

Hughes trots us through some of the more convoluted case studies, pulling together a play-by-play commentary from the writers, producers and directors who’ve all had their turn on the merry-go-round.  Unsurprisingly, the comments range from the icily polite to the downright vicious.  Neil Gaiman’s experience with the adaptation of The Sandman is, sadly, all-too typical.

Gaiman likens the process of writing a movie version of his book to “taking a baby and cutting off both of its arms and one of its legs and nose and trying to cram it in this little box, and filling the rest of the box up with meat.”  The book charts the ill-fated adaptation’s progress, from the faithful and promising initial version by Roger Avery to the literary equivalent of cardboard-encased offal.  Gaiman doesn't mince his words:

It was very obvious that whoever wrote it had never read any Sandman, and had no understanding of what it was about, and basically had sat somewhere while people said, ‘This is what we want this thing to be’”.

Like most other graphic novel authors, Gaiman has no rights over his creation, which is owned outright by Warners, who in turn own DC Comics.  While he laments “the strange, sad, Development Hell morass that [producer] Jon Peters has thrown it into”, his best hope is that:

The main downside to the book is that Hughes focuses on only one type of movie – the big, action-driven, special effects laden productions favored by studios.  It’s a shame he doesn’t include a chapter on Indie Development Hell (which can involve many, many actors, and finance that falls apart over and over, if not quite as many writers as a studio pic), or a comedy (which can be the helpless victim of the whims of its star) for comparison.

Ultimately, however, he does a solid job of highlighting one of the most important truths in film-making.  A screenplay is not what’s written on the page.  It’s a consensus interpretation agreed by all the people involved in the movie-making process, from the financier to the costume-designer, and, in William Golding's famous dictum, "nobody knows anything".  Hughes' Tales are decidedly cautionary: if you want to be a ‘real writer’, then screenwriting’s not for you.  All you’re ever doing is penning a list of instructions that will be interpreted and amended and carried out in circumstances entirely beyond your control.

Tales From Development Hell... serves readers on several different levels.  It reinforces insiders’ jaundiced view of the development process, whereby studio executives go to a lot of meetings and make a lot of dumb suggestions that will have little to no positive impact on a project and add years to movie gestation times.  Screenwriters who’ve been through the process of studio development will be only too aware of how typical each of the cases is, and may take comfort in knowing that they’re not alone.  Wannabes will get a reality check on what happens to screenplays once sold (if you want creative control of your work, write a novel).  And fans will enjoy the details of the intriguing movies that never were; Darren Aronofsky’s take on Batman, David Cronenberg’s Total Recall, the Alien-on-a-train pitch for Isobar and the John Boorman version of Lord of The Rings that would have featured The Beatles.  Yes, those Beatles.

The next time you wonder how such-and-such an excremental travesty actually got to be a multi-million dollar movie, this book will provide you with an inkling of how Hollywood mashes silk purses into sow's ears, as well as explaining why there are some turds that can never be polished.

sounds consistent with every story I've heard about pitching to Hollywood.

As for Graphic Novel adaptations, check out Brian Michael Bendis' "Fortune and Glory" - quite hilarious.

Joshua Chaplinsky from New York is reading a lot more during the quarantine March 6, 2012 - 3:03pm

Got a copy of this on my stack. I love film books. Can't wait to read.

With all the great movies that never get made and all the terrible ones that do, it's a shame.

Renee, stay positive and be the exception!

Definitely sounds worth a read.

It's not surprising that this happens though as the screenwriter is generally not the person who gets a movie made.  It's the studio that puts up the money and the director (usually) who has the 'vision' of what they want to make.  The writer is always going to be way down the pecking order.

Also, as mentioned in the review "nobody knows anything" about making a hit movie so you get elements of decision making by committee so that no-one has to carry the can if it all goes wrong.

I work in development hell and the book is spot on about a lot of the inane back-and-forth that can go on around a screenplay.  Oh, the stories I could tell if I wasn't sworn to confidentiality!

That said, 99.9% of screenplays out there are absolute drivel and do need a lot of re-working.  That's why the development process is in place.  A lot of the writers quoted in Hughes' book do admit that other writers managed to improve elements of their draft, and that there was an ongoing sense of progress - unless, as in the case of The Sandman, there wasn't.

If you're interested in this subject, there was an illuminating interview with four star screenwriters about 'Rewrite Hell" from Gavin Polone earlier this week -