"Scream: Chilling Adventures in the Science of Fear" by Margee Kerr 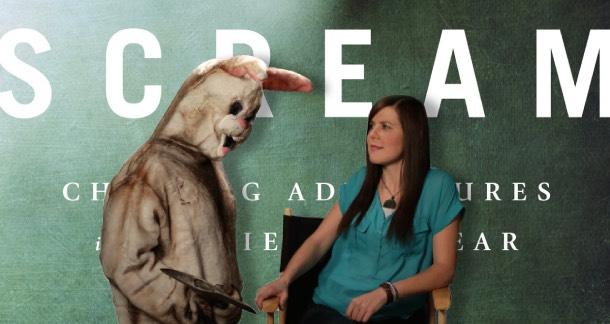 What scares you? It might not be the same thing that scares me. According to sociologist Margee Kerr, after years of coding responses to the question What’s your biggest fear?, being trapped alone tops the list.

In Kerr’s non-fiction book Scream: Chilling Adventures in the Science of Fear, the author explores exactly that – what makes people scared. Following being trapped alone, Kerr also found that death, the dark, drowning, and the loss of a loved one rounded out the list of what people cite as their biggest fears.

Kerr structures her book around a series of experiments and experiences that spanned two years and took her around the world to some of the scariest places on the planet—haunted houses, death-defying roller coasters, abandoned prisons. She even suspended herself by a cable from one of the tallest man-made structures in the world.

Her experiments and sociological observations began in Pittsburgh, Pennsylvania’s “ultimate haunted house,” ScareHouse, which has been ranked of one of America’s scariest Halloween attractions by the Travel Channel, and has been featured on Buzzfeed, Forbes, and various other media outlets. There, through a peephole in the wall of the haunt, she monitored people while they experienced moments of pure vulnerability and terror. (All customers were notified beforehand.) Kerr would watch people’s expressions, hear their screams, see the tears in their eyes, and even see them trip over each other—and sometimes push each other out of the way—to avoid the fearful thing that stalked them in the dark. Kerr wondered why people would pay money to stand in line for hours for the chance to scream?

Why are we seeking out fearful content and experiences in record numbers?

Kerr’s book walks us through the questions she was hoping to answer: What can we learn from scaring ourselves? How does our biology and culture influence what we are scared of? How do we engage with scary and thrilling material? Why do we oftentimes perceive ourselves to be in ever greater danger than we are? And why are we seeking out fearful content and experiences in record numbers?

Kerr rode Fuji-Q Highland in Japan, a 3,300-foot, two-minute ride that took her 141 feet in the air, and dropped her over a 121-degree-beyond-vertical, while taking us through the history of thrill rides. The author notes that there is something freeing about screaming as loud as you want—something that often happens on such rides. Through our evolution, screaming has protected us from predators and nearby danger, and sometimes screaming while being strapped to a metal contraption can feel pretty darn good.

Dangling off the CN Tower Edgewalk in Toronto, a five-foot-wide metal grate walkway nearly 1,168 feet above ground, Kerr walks us through the growing demand for thrilling tourist attractions, from the transparent bridge at the Grand Canyon to base jumping, skydiving, and more. Why do we purposefully put ourselves in danger, triggering our fight or flight systems?

From the psychical chills, Kerr moves on to the psychological, visiting Eastern State Penitentiary to explore the fear of total institutions—places that isolate people, often without their consent. Places like asylums and prisons generate the fear of “being trapped alone," which begs the question, why are we so afraid to be alone? Alone in the dark, or even alone with our own thoughts? The impact of isolation and deprivation have been extensively documented, and Kerr speaks briefly about this fear of losing one’s identity, and one’s self in forced isolation.

Cultural fears are explored, of ghosts and mythic monsters, and of course varying cultural fears of death and dying. In terms of monsters, our fears of fantastic beasts have morphed into monsters that are real – thieves and murders. For some individuals from varying belief systems, fears of possession, hauntings and witchcraft, and the supernatural are present. Yet, Kerr does stress evidence in the supernatural has yet to be proven, and that often, those who report supernatural encounters are just exposed to real-world explainable events like infrasound. Large, empty, abandoned structures are also prime locations for naturally occurring infrasound.

Perhaps our fears of the supernatural, at least in the United States, revolve around the idea of anticipation—anticipating death, Kerr notes.

The process of death in the United States has moved away from a community affair to a sterilized function involving another medication, another treatment, another physician to visit. Where the sick and dying were once surrounded by friends and families, they are now kept in sterilized centers. Where we once spoke openly and freely about dying, we now speak about death in euphemisms as he’s “losing his battle.” Death is being hidden away in the modern world, and maybe that’s why there’s a morbid fascination with it?

Kerr also visited the Aokigahara forest in Japan, what’s often called the suicide forest. It ranks behind the Golden Gate Bridge as the most popular place to commit suicide, and has become a somewhat morbid attraction for those seeking to raid the dead of their belongings or capture images of a body on their camera. According to Susan Sontag, author of Regarding the Pain of Others, she notes that people might do this because looking at them (the dead) suggests that you are exempt. Maybe this is why dark tourism has increased, because people are trying to gain an understanding of death—while still feeling safe from it?

The most interesting part of the book appears near the end where Kerr returns to ScareHouse to apply her theories of what scares people from her research by developing what she called “interactive” experiences that would later be termed “extreme” scares by others in the industry. What was most striking through her data collection from qualitative responses is that not only was she able to predict the popularity of the zombie craze a few years ago by the responses individuals were giving her of what scared them, but that while people were telling her the interactive haunt was thrilling, it was not scary. People wanted to be scared more. There were even scenes in the haunt where people were being grabbed, and a fake plastic knife was being run across their neck, but still haunted house patrons wanted to be scared more.

Even after revamping the project for the second year, people still said they wanted it to be scarier. Why? While Kerr continues to review data, about what scares us, we can say that thrilling experiences and self-scaring all come with a moment of confrontation and resolution—that leaves us feeling good, in control, confident and secure, so maybe this is why we like to be scared? Maybe this is why we like to scream?

Bookshots: 'Population Wars: A New Perspective on Competition and Coexistence' by Greg Graffin