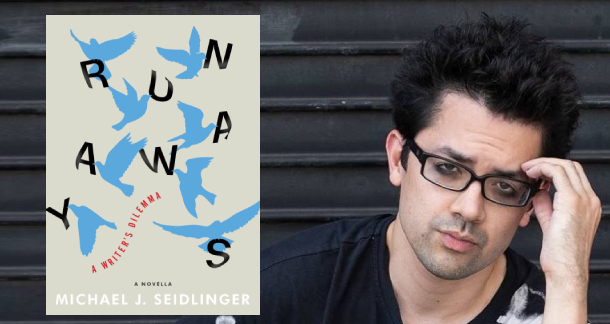 Attacked. Absolutely attacked is the only way I can summarize my feelings after reading the first few pages of Runaways. The first section ends with:

“Just 1000 words today, that’s all. A thousand words. Instead, they drafted a post. The rest, you could say, was procrastination.”

If you’re a writer who also inhabits social media, you just exhaled like you were punched in the gut. This is not the only punch you are likely to take from this slim book, and yet, it is still fiction. Michael J. Seidlinger’s latest release, Runaways: A Writer’s Dilemma, straddles many genre dividers: literary, experimental, meta-fiction, and even craft writing, yet it remains singular in its concerns.

We follow a writer as they struggle against the obstacles of capitalism, social media’s seductions, and life in general to write a book. The cycle is painful, as the writer, who is not named, goes from the pit of posting/chasing dopamine, to the heights of ecstatic creation. His journey takes a few twists, turns, and sudden drops, although ultimately ends on a positive note, which saves this story from becoming a nonfiction.

Seidlinger’s latest straddles many genre dividers: literary, experimental, meta-fiction, and even craft writing, yet it remains singular in its concerns.

This is all to say, this story reads similar to that of a log that the writer would keep, rather than purely a story. It is sparse in description, if having any at all, and pretty much gives the reader three modes of action. We follow the writer as they agonize over writing, which inevitably pushes them online. Then, after much struggle there will be some writing, which is closely followed by sleep and the writer’s grind of eat, work, sleep, until writing becomes real to them again.

Sprinkled throughout the narrative are these “posts” created in those online moments the writer attempts to avoid. Not all of them make it directly into the story, but most seem about “tweet” length. The best part is that they do fluctuate in quality based on how well the writer is doing on their novel. When they are working hard on their narrative, their posts suck and are pithy, but when they are posting a lot, there is a marked improvement. This of course is subject to the reader’s perception, but this flux and flow makes Runaways feel like you are reading about the writer’s life in real time.

Folded within this narrative is a restrained but cutting critique of writing, publishing, and what it means culturally, to be a writer. While Seidlinger is clearly winking at those individuals who have been writing for a long time or at least know the industry well, he walks on well-trodden paths. He is both tough and fair on social media, despite the easy self-sabotage. There is this element of what a “necessary evil” social media is that creeps into the mentality of our writer.

“Did social media correlate with tangible success, or was it more of a performance of having extensive social capital?”

“Little did a writer realize that the discourse, much like the creation of content, never really ends. If social media existed, the discourse would exist and demand of its participants undivided attention.”

“What happened to being a person rather than a brand?”

Thankfully, Seidlinger does not offer any solutions in order to correct social media’s seductive impulses. It is not his writer’s job to come up with solutions, either. It is enough for the writer to survive and navigate these waters. Things are hard enough. Some may view this as a lack in the narrative, but it is one of the pieces in this novella that truly works. There isn’t anything extreme or fantastical that is occurring. An individual is attempting to write, edit, and get their manuscript published—simple as.

Seidlinger has crafted, possibly unintentionally, a meta-fiction. It is the extra elements not confined to the narrative proper that break this story wide-open. He goes even further to include his author’s bio, which gives real numbers on his student loan debt and wealth or lack thereof. Finding this at the end crashes the fictional notion of his novella against the reality that being a writer is truly hard, even when it seemingly works out. Seidlinger is, after all, published, right? A writer finishes a manuscript and might eventually have it published, too. And then they have to do it all over again. And again. And again for as long as they live.

Of course, one doesn’t have to continue writing, but as our writer seems to be fully aware of, some don’t have a choice. To them, when you are a writer, you must write. This idea is pervasive throughout. The writer says no to friend outings. He takes long weekends only to write, and carves out large swaths of time during the week to write more. This isn’t possible for everyone, but our writer, who at least mentions a significant other at one point in the story, uses their time wisely. There is only so much time to write. 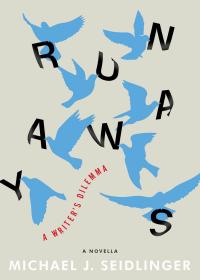 The title calls back to what is the centerpiece of this book, aside from the fact that writing a novel is this kind of uphill battle. It is about chasing this intangible, often fleeting feeling. It is this swift movement, "the runaways" as the writer calls them. It is this ecstasy of writing, putting words down in order to spill the inner life to the outer, in hopes of connection. This might be missing the mark of what Seidlinger is referring to, but he does offer a definition of his own:

“Runaway - (n) An idea, story, or mood that escapes the moment you are right in the middle of experiencing it.” This is of course the chief conflict for the writer in the story. They are consistently “hitting the beat” for a night and then falling off the wagon for a week. And as we come to find out alongside the writer, when you author a book you experience this strange created thing, which you then let go of.

If there is anything holding this little novella back, it would be the ending, which I will talk around. Already mentioned earlier is that it ends on a more positive note, and given the overall “project” Seidlinger is constructing here, I can concede this is fitting. Yet, in order to fulfill the metafictional element of this work, it would have to end in a realism. This may be my own pessimism, getting the better of me.

As a whole, Runaways can be treated as a cautionary tale, writer’s fable, or craft book depending on the angle. This might be the other achievement for Seidlinger, that his book captures a broad net of feelings towards writing. Because despite having similar impulses of voluntary isolation and imagining different worlds, writers are as varied as their readers. This novella has certainly established a spot on my easy-to-reach shelf for when I need encouragement or solidarity.

If you are curious to understand even a modicum of what goes into crafting a novel in this social media age or if you’re looking for some reassurance when you’re stuck, look no further. Hell, even if you are just looking for some bitter affirmation of your internet habits, it’s all here. Do not miss out on this charming little narrative.

Get Runaways at Amazon