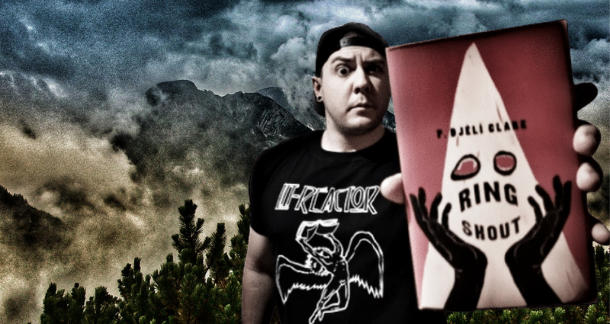 There are evil things that plague our world, spreading hate and invoking fear. A malignity that knows no bounds. It all began with a malevolent sorcerer’s spell that gripped a nation, driving people to corruption and wickedness. D.W. Griffith used this magic to lend power to a group rising in prominence called the Ku-Klux Klan. With their plot coming to fruition, one person stands in their way. Maryse Boudreaux is a champion for good-hearted people that have been wronged for too long. She has stood tall in the face of the nightmarish creatures known as the Ku-Kluxes, striking them down with a magical sword powered by her warrior spirit and the roaring vengeance of her people's tormented past. She’s not alone. She marches with a merciless group to defend what is right and avenge all those who have fallen to the vile atrocity before them.

Ring Shout might be the most important piece of dark fiction you will read for a long, long time. P. Djèlí Clark’s words are that of the monster-killing blade his protagonist wields. Slashing and stabbing what haunts us in fiction and reality. Racial and gender discrimination are prevalent societal injustices. Fueled by hatred, these transgressions can spread viciously, but can also be cast away. Together, with a strong will and a courageous effort, we can change the course of history and do away with inequality and discrimination. This powerful theme helps the author prove that the fictional worlds we create can serve as a mechanism to deliver a message to readers. Let’s come together in solidarity through literature and rise against hate.

There were two brothers, Truth and Lie. One day they get to playing, throwing cutlasses up into the air. Them cutlasses come down and fast as can be-swish!-chop each of their faces clean off! Truth bed down, searching for his face. But with no eyes, he can't see. Lie, he sneaky. He snatch up Truth's face and run off! Zip! Now Lie go around wearing Truth's face, fooling everybody he meet.

Maryse Boudreaux is an intensely influential character. She exudes strength from deep within her soul and cuts down her enemies with ease. She is unflinching in her proclamation and leads with purpose. Clark penned a strong female protagonist that would be revered by the most formidable of foes. When this tale begins, readers might assume Boudreaux’s sword is where her power resides, but rest assured—this heroine would not falter no matter the weapon. As her story progresses, we learn more about her devastating past life and gain some perspective on what lies deeply rooted inside her. It's what drives this character and makes for an immersive and compelling read. 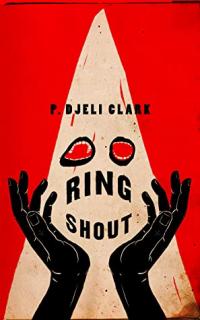 I would not say that this story hinges on the writer’s effectiveness as a world-builder, as I consider Ring Shout to be a character-driven story, but there are scenes described in this book that enveloped me as a reader. The Juke Joint is this upbeat congregation where folks can dust off their heels and enjoy the company of other genial individuals. This is the kind of place where anyone, even Maryse Boudreaux, can take their minds off the current state of the world. That is until the Ku-Klux come knocking on their doors. The Dead Angel Oak Tree is this grim and fantastical location where the Night Doctors are foretold to reside. This is one of those magical places in fiction that takes the reader down a dark path steeped in gothic tones. Lastly, the dreaded theatre atop Stone Mountain, the culminating venue where a hateful spell infected the minds of so many people—this is where the protagonist must come face-to-face with pure evil.

Ring Shout is a triumphant blend of horror and fantasy that is fiercely creative. Clark solidifies his authority as an academic historian in this reimagined, fictional world where the monsters from our reality are brought to life in a terrifyingly surreal fashion. Readers will find themselves devouring this outlandish adventure of heroism that follows a warrior on the hunt for the vile creatures known as Ku-Kluxes. We are all incredibly fortunate to have such a skilled writer determined to deliver this important message. This is the kind of dark fiction with historical context we so desperately need right now.

P. Djèlí Clark is the author of other works, such as The Black God's Drums, A Dead Djinn in Cairo, and The Haunting of Tram Car 015. He is the founder of FIYAH Literary Magazine and his novella, Ring Shout, has been acquired by Skydance Television to be produced as a series directed by Kasi Lemmons and starring Kiki Lyne. You can also find several of Clark’s short stories in a variety of publications including a spin-off tale called Night Doctors, which is set in the same world as Ring Shout and available in issue 98 of Nightmare Magazine.

Get Ring Shout at Bookshop or Amazon