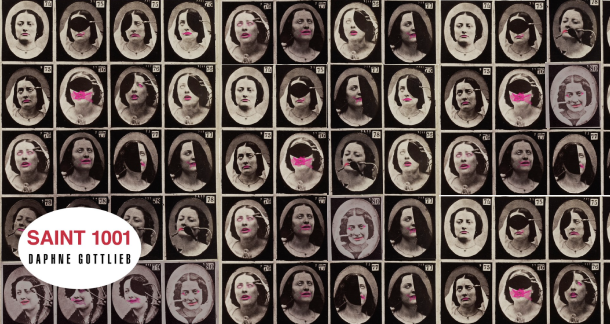 Something happened to S in an alleyway, and it wasn’t anything good. S has a lot to say, about almost anything except what happened, as the voluminous correspondence with her former lover J that makes up the thrilling anti-novel Saint 1001 demonstrates. And speaking of demonstrations, Daphne Gottlieb, in her author biography, says that she “stitches together the ivory tower and the gutter,” which she absolutely does. The letters S writes about the many casual encounters she has are stitched together from endless, dizzying quotes. Everything from scholarly discussions of James Joyce to this bit from the 1968 version of Herbie the Love Bug— “Come on, big guy. Let’s go for a ride. Let’s cruise”—tell of a life lived both in the body and constituted by language.

“You think you wrote a book about sex; you wrote a book about PTSD!” Gottlieb’s former roommate told her about Saint 1001, and it’s true. Post-traumatic stress disorder can lead to everything from extreme promiscuity, which S practices through the mechanism of pre-OkCupid/pre-Tinder text-only online ads, to extreme dissociation, but this is not a tell-all. “The one question I think I’m not going to answer around this book,” Gottlieb said, is “‘Is it real? How much of this is real?’” What is real about Saints 1001 is that we are all made out of culture, whether it’s movies or books or lyrics or the most lurid of “news” articles, and S’s many letters over the years to distant J, letters that seemingly go unanswered, are made of all these real things, things that make all of us real.

Saint 1001 is the literary equivalent of the Golden Record launched in the Voyager probes as an attempt to explain humanity to an alien culture forty thousand years from now.

Then there’s the pet lime. Scurvy Dawg’s fanciful adventures are crowdsourced by S’s friends in the book. The many pictures of his (yes, his!) life in the book were crowdsourced by Daphne Gottlieb’s friends. Full disclosure: I and my then four-year-old son created an image of the lime being squashed by a judge’s gavel. You see, after attending a Devo concert and playing tennis, Scurvy Dawg went to court and changed his name to Henry. The story of Henry—a name which appears throughout the book—also involves a relationship with an egg-timer named Lola, their eventual engagement, and on a parallel track, material about serial killer Henry Lee Lucas and a girl in trouble and then a series of foreboding redactions of text. Reality is both beside the point and too terrible to fully perceive, let alone comprehend.

One might think this sort of fancydancing would be alienating, the opposite of the earnest selfsploitation that so much writing about sex and the internet is these days. And you would be half-right. The book is not alienating at all: it’s not a puzzle, not a set of distractions, not the metatextual game of looking for the Hitchcock cameo in his films as a pressure valve from the suspense of the text. The artistry of the construction of the story from more than a thousand quotations and citations is immersive rather than estranging. You, reader, won’t know everything being cited, but you’ll know enough. You will have dissected a frog, or filled out a survey, or recalled a lyric from a song. The contents of your brain, just from being alive and literate in the late twentieth and early twenty-first century, are already in the book, in the life and mouth and brain and missives of S.

So, what is Saint 1001? It is more typographically extreme than House of Leaves, more enigmatic an epistolary text than the Griffin and Sabine books, more rigorous than the hypertexts that everyone was fascinated by back when the Web was young and not yet fully homogenized by social media platforms, it is horror and journal-ism and comedy and a great magic trick and must have been exhausting for whoever typeset and laid the book out. Saint 1001 is the literary equivalent of the Golden Record launched in the Voyager probes as an attempt to explain humanity to an alien culture forty thousand years from now. But those aliens are us, and the time is now. Saint 1001 is a letter from the culture, addressed to you, like the personal physical correspondence you haven’t received from even your closest friends in years.

Get Saint 1001 directly from MadHat Press

"Saint 1001" by Daphne Gottlieb is one of my favorite books, so I have devoted my dissertation research to it. As a literature student, I have received more info here about the best dissertation services on the market. Sometimes, even if you have profound knowledge of a subject, you may need a help and ask a professional to proofread or write it from scratch.

Hi guys! Newbie here, thanks for accepting me.
interesting discussion and most importantly useful for me