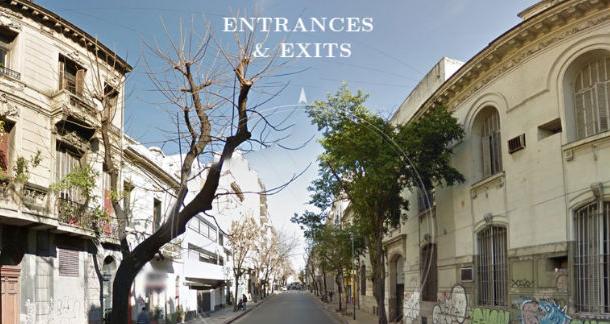 “We sell books that cannot be printed” – that's the slogan for Google's new publishing initiative, Editions at Play. It's a simple way of telling readers exactly what they're in for since these aren't just eBooks, but stories specifically designed from conception to move and interact.

About Editions at Play

Editions at Play is a collaborative effort between Google's Creative Lab and London-based publisher, Visual Editions. There are currently only two titles ready for purchase on their website and each book is summarized in a single sentence. Entrances & Exits, by I Am Radar author Reif Larsen is “the book that travels the world.” The Truth About Cats & Dogs, by Sam Riviere and Joe Dunthorne is “a book that takes sides.”

Since the Editions at Play website is pretty spartan, I went straight to the two titles, purchasing Entrances & Exits and previewing The Truth About Cats & Dogs. Full disclosure, my Windows phone (I know, I know. I'm cheap) isn't among the compatible devices listed, so I soon switched to a laptop. Editions at Play recommends using an iPhone running iOS8 upwards or an Android device with at least V4.4 KitKat.

Despite the fact that I wasn't viewing it on a mobile device, I was still impressed by the ingenuity of Entrances & Exits. The experience isn't dissimilar from playing a video game, with the reader forced to swivel around in Google Street View from page to page while trying to find the next bit of content. Larsen's story follows a man with a key that can unlock doors around the world, taking him in a moment from England to Argentina. It's a narrative that's clearly adapted for the technology, but also well-executed and interesting enough to stand on its own as a short story.

Is Editions at Play a promising new publishing platform, a bit faddish, or somewhere in-between? My tentative guess from their current sampling is the former of the three. It's genuinely exciting to see media bending in new ways and it seems like a very organic extension on the capabilities of eBooks that hasn't been nearly explored to full capacity yet. Editions at Play is still very new, however, and it's hard to judge based on so few samples. As in any other publishing venture, no technology will make up for poor storytelling, so talented writers are key to its success. Their site promises to publish four more books by international authors over the first half of 2016. Two of these titles are already visible on their website, including a collection of short science and science fiction called Strata.

One of the best things about the site right now is reading through ideas people have submitted for new interactive books. There's a concept for a book that watches your expressions and reacts to them, another for a story told through sound vibrations, and another that unfolds with every footstep the reader takes. Not all of them seem entirely feasible, but I'm definitely eager to see what other projects come out of Editions at Play.

Both Editions at Play books currently cost $4.25 and take an hour or less to read. If you have an idea for a book concept, try tweeting them here.

How is it a platform? I don't see any way for authors to use it, and that makes it less a platform than one company's bid to recycle ideas and pass them off as new.

And yes, I do mean recycled; there's nothing new in either of the first two books. They use ideas we've seen before in websites, games, and elsewhere. We've even seen a multi-thread narrative in books before.

Speaking of which, these aren't books. They're websites. Pretending that they are books doesn't change that fact.