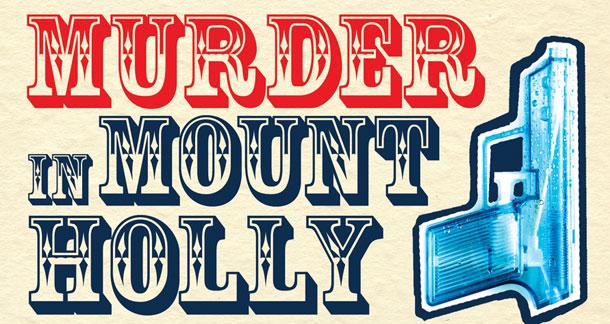 I tend to be the type of reader who prefers the “minor” works of major authors. Stephen King, Neil Gaiman, Joyce Carroll Oates, etc. I’m a far bigger fan of their short stuff as opposed to their novelistic endeavors. (Okay, I’m bullshitting a little when it comes to King. What can I say, I’m a crackhead for the guy’s books.) I don’t know why. All three of the aforementioned novelists have written more than a few classics, but for one reason or another I gravitate towards the stuff that you can chow down in one sitting.

Maybe it’s intellectual laziness on my part? Or maybe major novelists tend to let their freak flag fly a little more freely when they’re writing a piece under the fifty thousand word mark and in the process manage to create a far more engaging piece of storytelling.

To say the least, Murder In Mount Holly is one freaky little flag of a novel.

Herbie Gneiss is your typical boomer in the late sixties. He’s rudderless and attending college for no real reason other than he likes to read and get laid. When his father unexpectedly dies, his mother writes to let him know that she expects to follow her beloved spouse into the great unknown at any minute and she would like him to return home as soon as possible. Mrs. Gneiss is, of course, far from death and spends her ample free time parked in front of the television spooning ice cream into her mouth with potato chips. But in order for her to maintain her glutinous lifestyle, Mrs. Gneiss needs Herbie to drop out of school and get a job.

Herbie quickly finds employment at the Kant-Brake toy factory (which exclusively manufactures war toys) and a place to live (God forbid he actually live with his mother while supporting her) with the local kindergarten teacher and elderly wannabe starlet, Miss Ball, and her other tenant, retired U.S. Army cook Mr. Gibbon, who also works at the Kant-Brake factory as a quality inspector. Herbie acclimates to his new life as a working stiff, spending most of his free time with his eccentric new housemates. He even ends up taking Mr. Gibbon home to meet his mother and the two immediately become a couple and, along with Miss Ball, the three form a tight knit, politely racist social club and decide to rob a bank “for the good of the country” because the bank employees are nonwhites. In the meantime, Herbie is left to his own devices, meets a girl, gets laid, and like so many college drop outs in the late sixties, is drafted and sent to Vietnam and then promptly killed in action.

And in part two of our story, the narrative turns into a Brett Easton Ellis style bloodbath as our “patriotic” trio moves closer to pulling off their heist.

Maybe that comparison is a bit extreme? Perhaps the Marx brothers with guns or the Three Stooges if all the eye-pokes and sledgehammer blows to the head did some actual damage would be a better fit?

Murder In Mount Holly is the third release from the newly re-minted Mysterious Press, and although the imprint has been long established as a publisher of crime and mystery fiction, I would be hard pressed to define the novel as either. What it is is more of a Vonnegut tinged absurdist satire with the elements of a traditional caper novel thrown in to bring the “plot” to a close. As with most satire, the plot and character development in Murder In Mount Holly mostly serves as a means of delivering the message. And what’s the message, you ask? That the young are apathetic, at least until the problems of the world shit down their necks? That the old are xenophobic and frightened of change? That Americans are scared shitless of brown skinned men no matter their national origins?

Maybe a little of all of the above?

Or maybe none of it and I’m reading way too much into Theroux’s tightly paced, expertly drawn comic romp? Maybe all this ‘minor’ short novel is is a story about a boy trying to take care of his mother and getting himself and a few other people killed along the way?

Joshua Chaplinsky from New York is reading a lot more during the quarantine December 6, 2011 - 1:29pm

So wait, The Mosquito Coast is a comedy?