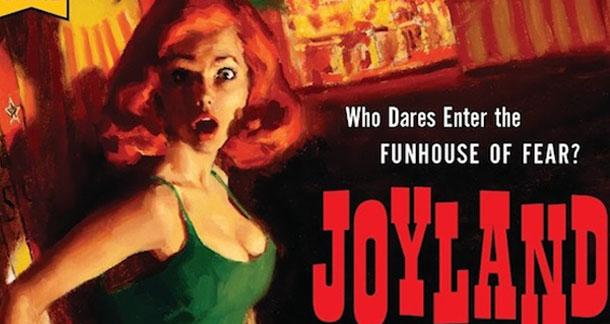 In the world of Stephen King, there are many voices. He is known of course for his classic horror, books like Carrie, Salem’s Lot, and The Shining. He is also famous for writing epic tomes that span space and time, such as The Stand, and It. He even dabbles in whatever The Dark Tower series is—steampunk western noir with a splash of fantasy and science fiction. And then there are his forays into crime and pulp, such as his latest, Joyland (Hard Case Crime). These are not usually my favorite books of his, partly because I’m not a huge fan of classic noir, film or otherwise. But one thing King always does well is tell a riveting story, so I was willing to give him the benefit of the doubt.

Set in 1973 in an amusement park in a small North Carolina town, Joyland follows Devin Jones as he grows from boy to man, as he gets over a broken heart, meets new friends, finds a new (if temporary) love, and solves a local crime.Things get off to a slow start, in my opinion, but that’s partly because of the way King sets up his novels. He wants to give you background, set up the city, give you the language and history of the time, so that you are not only immersed in his world, but building a network of emotions that allow you to care about his characters. Here’s a little bit about our hero, resident nice guy, Devin:

Take Joyland to the beach, or curl up on the couch and fall into the year, the time and place, and let Stephen King do what he does best—tell a great story.

1973 was the year of the OPEC oil embargo, the year Richard Nixon announced he was not a crook, the year Edward G. Robinson and Noel Coward died. It was Devin Jones’s lost year. I was a twenty-one year-old virgin with literary aspirations. I possessed three pairs of bluejeans, four pairs of jockey shorts, a clunker Ford (with a good radio), occasional suicidal ideations, and a broken heart.

I know that a lot of these details may be lost on younger readers, but that’s what makes King's early pages work. He not only gives you a sense of time and place, but of what his characters are going through. Devin is a good kid, he means well, and as we get his story, watch him interview for the job at Joyland and get a room at a nearby house just up the shore from the park, we see him overcome minor obstacles, and succeed. The cast of minor characters around him are fascinating, from the aging park owner Mr. Easterbrook, to the derby wearing and slick talking Lane Hardy, to the fortune-telling Rozzie “Madame Fortuna” Gold.

Another thing that King does well is set up information early in the novel and hint at it over and over again, bits and pieces filtering through the everyday life of Dev as he works at the park. We get the story of the ghost, Linda Gray, who haunts the funhouse, killed on one of the Joyland rides, her date for the day slashing her throat and leaving behind his extra bloody t-shirt and gloves. And we get the story of the woman, the boy and the dog, that Dev passes everyday on his walk down the beach on the way to work. For a long time they have no names, are merely part of the backdrop:

Although I can’t be completely sure, I think the boy and the woman and their dog were there from the first time I took that walk. The shore between town and the cheerful, blinking gimcrackery of Joyland was lined with summer homes, many of them expensive, most of them clapped shut after Labor Day. But not the biggest of them, the one that looked like a green wooden castle. A boardwalk led from its wide back patio down to where the seagrass gave way to fine white sand. At the end of the boardwalk was a picnic table shaded by a bright green beach umbrella. In its shade, the boy sat in his wheelchair, wearing a baseball cap and covered from the waist down by a blanket even in the late afternoons, when the temperature lingered in the seventies. I thought he was five or so, surely no older than seven. The dog, a Jack Russell terrier, either lay beside him or sat at his feet. The woman sat on one of the picnic table benches, sometimes reading a book, mostly just staring out at the water. She was very beautiful.

In time we’ll get to know these three, the woman being Annie, a single mother with a dying son, Mike, and their pooch Milo. Being a Stephen King novel, of course the sick boy will have special abilities, which will come in handy later. And Annie will provide a bit of heat and tension throughout, her history with shooting and rifles also popping up later in the book.

What King does best, I think, is weave together several narratives that seem separate, but ultimately come together for a powerful ending. He gives us the coming of age story of Dev and all that encompasses, his depressed nights listening to The Doors and later Pink Floyd, his hard work at Joyland, sweating out his shift in a dog costume, as Howie the Happy Hound, running rides and saving lives here and there—growing up, losing his virginity, and standing up for his beliefs. We get the story of the ghost in the funhouse, the crimes that her murderer committed not just at Joyland, but at carnivals and amusement parks up and down the eastern shore and southern states. And we get the story of the woman, the boy and the dog, their hopes and dreams, their suffering—the threat of death hovering over it all like a cloudy spectre.

Against all odds, King got to me by the end of the story. I found myself anxious as the climax rushed towards me, the darkness of the storm approaching the amusement park, the clues that Dev turns up with the help of his friends Tommy and Erin. I found myself caring about these characters as the boy, Mike, got sicker and sicker, the grief of a mother watching her son slowly die in front of her a gut-wrenching ball of emotions. When Dev sets up a special day for Mike and Annie (and Milo) at Joyland after it’s closed for the year, what could have been melodramatic and sappy in lesser hands, turns out to be a bittersweet final adventure for Mike. Take this ride on the Ferris wheel:

Slowly, the world opened itself beneath us: first the park, then the bright cobalt of the ocean on our right and all of the North Carolina lowlands on our left. When the Spin reached the top of its great circle, Mike let go of the safety bar, raised his hands over his head, and shouted, ‘We’re flying!’

I won’t give away the ending, tell you who the murderer is, or who lives and who dies, the destiny of our hero Dev and the cast of characters that live and breath on the pages of Joyland. It’s a slim book, by King standards, only 283 pages, but it adds up to an enjoyable read. Is it his best book ever? No. Is it his worst? Far from it. If you liked his other period books and crime related novels, like The Colorado Kid and The Green Mile, then you’ll probably like this one. It’s not horrific, but there is tension for sure. And I found myself tearing up at the end, so that has to be worth something—that King can still get to me, make me care, after all of these years and 50 or so books. Take Joyland to the beach, or curl up on the couch and fall into the year, the time and place, and let Stephen King do what he does best—tell a great story.

Bookshots: 'The Rim of Morning' by William Sloane

Richard, I found this to be one of his best novels. By the end of the book I found myself so attached to the characters that I had wished there was another thousand pages. One thing that I do love about King is that no matter what the story (even the worst stuff that he has written) he always makes you feel like you are a player in what is happening. I also teared up at the end of it.

Good to hear. Yeah, right, emotional at the end. I was suprised. I guess it's tough with King, because when I read his writing, I have to compare it everything he's ever written. It's hard not to. I like this book a lot.

I truly admire your fantastic updates here these are pretty interesting and valuable. The people who looking for quality stuff and the latest designs can avail here. Your sharing information on https://topaussiereviews.com/assignmenthelper-review/ website quite recommending please do share more.