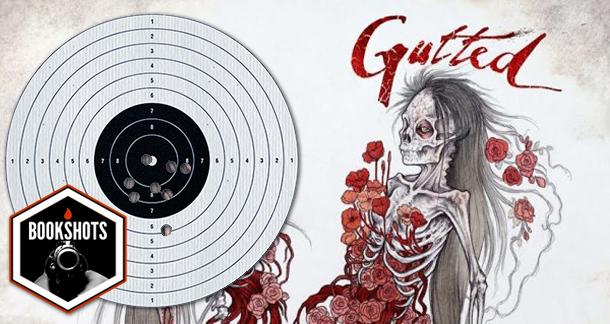 Open[s] up that wondrous space that dark fiction at its best inhabits, where it’s just you and the story and whatever is scratching at your window...

A collection of twisted and heartbreaking horror tales that explores what lies beneath this skin we’re in.

Is That a Knife in Your Heart or Are You Just Dying to See Me?

Anything by any of the illuminati within—from the provenance-heavy Clive Barker, Paul Tremblay and Neil Gaiman, to new blood like Mercedes M. Yardley, Amanda Gowin, Josh Malerman and others.

A doomed 12 year old boy, a grieving supermom, a satanic cop, a dad trying to reconnect with his broken daughter, a vengeful brother, a quarry monster…. you name it. If it bleeds, it leads.

Sarah Paulson, clearly, in several roles. Ditto Jessica Lange as the grown up Susan from The Lion, the Witch and the Wardrobe, in Neil Gaiman’s sexy "The Problem with Susan," a story that confirms that none of us have ever really survived Narnia. Matt Damon as the satanic cop in Richard Thomas’s cyclonically weird “Repent”, no question. Rose Byrne as the mom in Damien Angelica Walters's  exquisitely structured, “On the Other Side of the Door, Everything Changes.” Tom Hardy, maybe—as the stand-up comic dad whose daughter leaves the house on her own two feet and comes back six years later in a box—and still alive—in Brian Kirk’s unflinchingly black “Picking Splinters from a Sex Slave.” Daughter would be played by Haylee Steinfeld. J-Law, of course, in Amanda Gowin’s “Cellar’s Dog.” Ian McKennen and Milo Parker as the uncle and nephew, in Ramsey Campbell’s jaw dropping “The Place of Revelation.”

Doesn’t matter. We all do. Whether it’s the mean streets of  Chicago, or suburban Illinois, or Liverpool, UK, or New York, or Appalachia, or London—these dark veins are in all of us just waiting to open.

Every story had a jewel line, honest. But these two, for me at least, perhaps best represent the overriding theme of the collection.

Your mind had to tell you a story about what you saw, but in time you won’t need it. You’ll see what’s really there.

From Ramsey Campbell’s,  "The Place of Revelation"


And from Josh Malerman’s transcendent, “The One you Live with”:

Have you met her yet?

This is the kind of collection that gets its teeth into you and won’t let go. It is a horde of hungry shadows, from Wyotovich’s weird and wandering “The Morning After Was Filled With Bone,” about a woman stripped to the core by love, to John F.D. Taff’s heartbreaking collision course down memory lane, “Cards for his Spokes, Coins for His Fare," to Lisa Manetti’s holocaust shocker, “Arbeit Macht Frei.”  Newcomers like Mercedes M. Yardley with her weirdly sensuous tale of cutting, and Christopher Coake’s, “Dominion,” a revenge tale set in the flickering shadows of an eternal Independence Day hold their own against heavyweights Ramsey Campbell’s transcendent twist on the creepy uncle tale, and Clive Barker’s unbearably tight tale of letting the right one go, in “Coming into Grief.”

There is inky glimmer to these dark tales—kudos to the editors for collating some of the most beautifully written stories I’ve read in a long time. From the controlled pace of Kevin Lucia’s gorgeous, haunting, “When We all Meet at the Ofrenda," to Tremblay’s innovative and ambitiously creepy haunted house story, to the surgical precision of the characters in Maria Alexander’s “Hey Little Sister,” and Amanda Gowin’s chilling authentic “Cellar’s dog”—together they open up that wondrous space that dark fiction at its best inhabits, where it’s just you and the story and whatever is scratching at your window, and where no one can hear you scream. And you will.

Thanks for the good information, I like it very much. Nothing is really impossible for you. your article is very good.
온라인 카지노
카지노사이트
바카라사이트
토토사이트
호텔 카지노
https://www.j9korea.com/