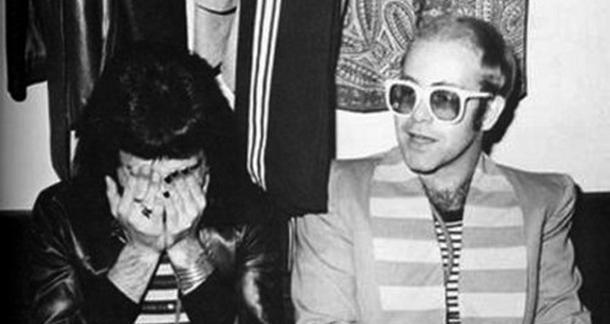 A buck-toothed African and a pasty-skinned Brit walk into a bar...

While the mind conjures stereotypical images of two diametrically-opposed figures, in fact the similarities between these particular men are stunning.

Both men passed awkwardly through childhood, incapable of identifying with the role models offered by their families and cultures, each finding release in music and piano lessons. The African, on the heels of violent revolution, fled to England while still a young boy, placing both men in proximity as they grew up in the Great Britain of the 60s and 70s. Both men fought hard to contain homosexual urges, enduring all the grisly emotional carnage that such denial inflicts, although both men ultimately embraced their sexuality well into adulthood.

Despite the profound social challenges of their formative years, each would claim superstardom, although neither took his birth name onto the world's stage. The African man—born in Zanzibar and raised in the Zoroastrian tradition—changed his name from Farrokh Bulsara to Freddie Mercury, arguably the greatest frontman in rock and roll. The other, a bespectacled Brit named Reginald Kenneth Dwight, would become Elton John, the award-winning musician, composer and performer, who has to date sold an eye-watering 250 million records. They shared professions, proclivities and social circles, and this summer they share the distinction of being the subjects of two respective books: Mercury: An Intimate Biography of Freddie Mercury, by British journalist Lesley-Ann Jones, and Elton John's autobiographical Love is the Cure: On Life, Loss, and the End of AIDS. The common ground dries up here however, as one proves compelling and thoroughly informative  while the other never strays from the fields of mediocrity.

The Conflicted Brilliance of Freddie Mercury

Queen vocalist Freddie Mercury, who passed away in 1991 from AIDS-related pneumonia, remains one of, if not the greatest frontmen in rock and roll, gifted with a fearfully potent, multi-octave range and a flamboyant on-stage presence that skirted the edges of camp while still radiating male bravado. As a lyricist he remains underrated; while the peerless “Bohemian Rhapsody” stands as his pièce de résistance, stadium shakers like “We Are the Champions” and “Another One Bites the Dust” continue to overshadow more thoughtful, autobiographical fare such as “Seven Seas of Rhye.”

Like most great entertainers, Freddie was an egomaniac with an inferiority complex, and neither oceanic financial reserves nor global adoration could beat back the waves of self-consciousness that shadowed his every accomplishment. Mercilessly ravaged by AIDS, history has revealed what his contemporaries had long suspected: that Freddie Mercury had enjoyed a sexually-promiscuous lifestyle with both men and women, contracting HIV at some point in the mid-to-late 80s. Intensely private and often deceptive regarding his personal life, he revealed his diagnosis—not his sexuality, but his affliction by AIDS—via press release on the day before he passed away in 1991.

Mercury is Freddie’s story as told by journalist Leslie-Ann Jones, an acquaintance of Freddie’s and someone who at times enjoyed uncommonly broad access to Queen, although readers should be cautioned that Mercury is in no way intended as a history of the group. In fact, those Queen fans hoping for new insights into the band will be maddeningly frustrated as relatively short shrift is given to Queen's creative processes. The writing and recording of the band’s first album covers the span of a handful of pages, and while "Bohemian Rhapsody" receives fair treatment, the balance of the catalog is addressed at a cursory level. In the place of such examination is much speculation from observers and hangers-on regarding less consequential issues such as who in the band were better friends or why Freddie insisted on approving all publicity photos (his teeth).

Much of Mercury is crafted around the self-aggrandizing hearsay and conjecture of fame-whores and Freddie's lesser acquaintances, offering blustery opinions in place of facts and events. Of particular frustration are the myriad unanswered questions that Jones poses, then leaves to the ages. Raising the issue as to whether a particular lyric might be a biographical allusion to Freddie's childhood, the author concludes, "We can't know." When discussing why Freddie never sat for his O-level exams, Jones posits "Possibly distracted by confusion over his sexuality..." with nothing more. He might have "possibly" been abducted by aliens as well, and maddeningly, we are left with the same factual basis for each option.

While light on critical consideration of the creative processes behind the music, Jones does deliver a number of rich insights into other aspects of the singer’s life; most notably, his childhood. In fact, Jones traveled to Mercury’s boyhood home in Zanzibar to absorb the culture and to view his not-so-humble beginnings firsthand. Additionally, the detailed description of the legendary Live Aid show, presented as Queen's greatest moment, opens the book in spectacular form, offering Jones’ firsthand, behind-the-scenes observations of not just Queen, but the colorful gathering of legends backstage.

Ultimately, while Mercury might rely too heavily on the hearsay of petty fame-seekers, Jones hits all of the major milestones in Freddie's life and manages to deliver a briskly-paced, high-level primer on a terribly charismatic and complex man.

Love is the Cure: On Life, Loss, and the End of AIDS, though autobiographical, is not the story of Elton John. At a lean 235 pages, how could it possibly cover his four decades of music, headlines, drugs, sexuality, superstardom, and redemption? Thankfully, the author does not offer this as his definitive chronicle, but rather as a focused consideration of his role in the AIDS relief and to shine a light on his global efforts to relieve the enduring destruction that epidemic continues to wage. At a time when it is commonplace for celebrities to take up social causes that they boil down into a handful of pithy aphorisms that they then condescendingly deliver at stone-faced press conferences, one is forgiven for bringing low expectations to the reading chair. Could this be yet another preachy, self-serving treatise designed to enhance Elton's reputation as much as AIDS awareness? Refreshingly, it is not.

In fact, Love is the Cure is a searching and fearless exploration of Elton's own awakening to not just the extent of the AIDS crisis, but to his own immeasurable luck in escaping HIV's grasp despite his reckless exploits with sex and drugs. Love is the Cure begins with the story of Ryan White, the young American boy who contracted AIDS via a blood transfusion, and who was subsequently thrown into a maelstrom of hatred and prejudice at the hands of his classmates, their parents, and his community. Elton enters the story as a full-blown drug addict, hopelessly strung out on cocaine and alcohol, embroiled in dysfunctional relationships, and in the punishing throes of bulimia. Despite his deteriorating condition, when he learned of Ryan's story, he offered to fly Ryan and his family to one of his concerts, hoping that the distraction and special treatment might temporarily alleviate the boy's increasing distress. This gesture would open the door to an authentic, committed friendship between Elton and Ryan, lasting through the boy's death in 1990. Despite his own mounting struggles to manage his day-to-day living as an addict, nonetheless Elton spent Ryan's final days by the boy's side at the hospital, happy to serve as the family receptionist while offering much-needed emotional and financial support.

Elton's' description of his excesses, tragedies, and triumphs during the ensuing years provide thoroughly compelling fare as he proves himself a gifted and surprisingly humble storyteller, and even though the book's focus is limited, the insights he offers into his own behavior and beliefs paint a richly-colored portrait of an artist well into the autumn of his career. The book deftly avoids the perils of rote statistical inundation and frothy emotional appeal, vividly revealing the effects of the AIDS crisis at macro and microscopic levels, discussing governmental initiatives (and failings) as well as offering personal views into lesser-known enclaves of AIDS victims, such as rape victims in South Africa or homosexual persecution in the Ukraine. Where his own charitable efforts are described, Elton never speaks down to the reader, nor pretends to elevate himself to the level of an expert.

An artful mix of autobiography and tightly-crafted social appeal, Love is the Cure (the proceeds of which benefit the Elton John AIDS Foundation), can be digested in an afternoon, and Elton's refreshing prose suggests that when the day arrives for him to publish his full-on memoir, he'll be giving Keith Richards a run for his money.