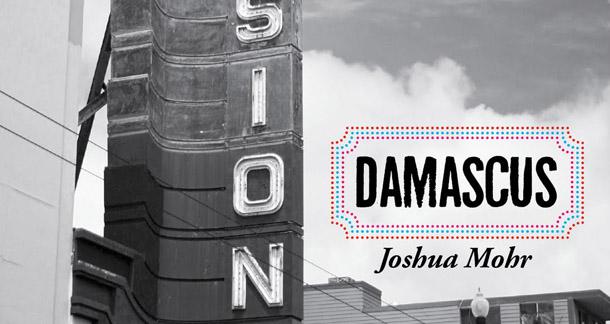 In 2009, O magazine named Joshua Mohr's debut, Some Things That Meant The World To Me, one of their 10 Terrific reads, saying: "Bukowski fans will dig the grit in this seedy novel."

That's right. Oprah and Bukowski. Together at last. You couldn't wish for a better demographic crossover.

He followed that up with Termite Parade, a book about an emotionally damaged girl and her insect infested boyfriend (which, to my knowledge, was largely ignored by the higher-ups at O.) I guess misanthropic alcoholism is one thing, but if you combine it with Kafkaesque bug fantasies, you've gone too far for them. It's like a sour, crunchy peanut butter cup no one wants to eat.

The road to Damascus and the road to perdition are the divergence in a yellow wood that Robert Frost warned us about. I say "warned" because while one path leads to redemption, the other dead ends in ruin. Ironically, if you're on the road to Damascus, like Saul in search of Christians to terrorize, you're probably not very interested in redemption to begin with. But in Joshua Mohr's Damascus, much like New Testament Syria (or a Russian reversal), you don't find redemption, redemption finds you. If your intentions happen to be good, well then you're probably on the other road, and best of luck to you, sir.

The ceiling of the bar is decorated with shards of broken glass and Corona bottle clouds. The walls have portraits of dead Iraq War veterans in their future; portraits with live fish nailed to them. Santa is hiding in his suit from Hitler, or maybe he's Hitler hiding in a Santa suit. It's hard to tell. There's a cancer patient on the lam from his family who just wants to be touched. The local purveyor of bathroom handjobs is more than happy to oblige him (for a nominal fee, of course). Santa begrudgingly turns a blind eye while Revv- the only other employee at the bar- Revv doesn't even emerge as a real character until about the halfway point, so who cares what he thinks?

Owen (Hitler by way of an unfortunate birthmark, Santa by way of a homeless salesman), agrees to let his niece's friend host her anti-war art show at his bar. His recently befriended, alcoholic ex-Marine of an acquaintance takes offense at her appropriation of dead soldiers, promising to ride the train of consequence into town like Dave Mustaine should the show actually happen. Meanwhile, No Eyebrows (the cancer patient) and Shambles (she of the supple wrist) experience a whirlwind courtship wherein he tries to convince her to sleep with him and she tries to convince him to go back to his wife. All these threads and more come together during the climactic art show, though not without a few degrees of separation between plot lines.

The whole thing may sound like the setup to a bad joke, but it's a joke without a punch line. That's not to say there aren't laughs to be had along the way, they're just never at the expense of the sad cast of characters that inhabit the titular bar. This is quite a feat, considering Mohr is working with such a thoroughly unlikable bunch of archetypes- the self-loathing alcoholic, the terminal case who's lost hope, the handjobber with a heart of gold. You wouldn't want to spend five minutes with these people in real life. But Mohr treats his characters with such tenderness that he managed to squeeze the blood of empathy from this turnip I call a heart. I haven't decided whether making them so broadly relatable is dishonest writing or a testament to Mohr's skill, but it's obvious he cares about them.

In the book's introduction, Mohr says he wanted to write a book about characters with "a berth of backgrounds" who had "contradictory social viewpoints." A noble enough aspiration, for any writer. A few sentences later he goes on to say he also wanted to protest the wars in Afghanistan and Iraq in his own way. Uh oh. That was an immediate red flag for me. A novel shouldn't preach. Any overt display of politics where the author's voice becomes distinguishable from the character's can pull the reader out of the story hard enough to cause whiplash. So when I encountered the Bush bashing performance artist Syl, I couldn't help but groan. I dislike the ex-pres as much as the next armchair pundit, but Bush bashing is so 2003.

Good thing that's when the novel takes place. In keeping with his promise to present contradictory viewpoints, Mohr gives us Byron to act as Syl's foil. The words he puts into the ex-Marine's mouth aren't quite as authentic as those he puts into Syl's, but I appreciate the effort. Both sides present valid points, I just wish the character on the left wasn't so goddamn annoying. In that respect, maybe Byron is the more successful character here. Syl may have the strength of Mohr's convictions, but he presents the opposing viewpoint as less of a caricature.

All in all, another winner from indie press Two Dollar Radio. I'm starting to feel like a shill, but this is the third book of theirs I have read and enjoyed. I mean, I'm not about to get a tattoo or anything, but they are building quite a fine stable of releases. So get out there and support your indie pubs, otherwise you'll be at the mercy of Oprah's recommendation for the rest of your life.

*Any claims made as to the literary tastes of "O" Magazine should be regarded as speculation on the part of the writer, if not completely spurious.

it's hard to find a book review that avoids spoilers, shares enough of the story to build intrigued, keeps tongue in cheek, and finds the means to mashup Oprah & Bukowski. You sir, work magic.

also, supporting indie publications is downright noble (but you didn't hear it from me)

Joshua Chaplinsky from New York is reading a lot more during the quarantine October 15, 2011 - 11:06am

Why thank you. (*Cue "The Final Countdown" and theatrical arm waving.)

Great stuff. I just read with Josh, and was going to pitch LR on this one, guess not - hahahahhahhahhaha. It looks really good and your review only make it sound better. Kudos.