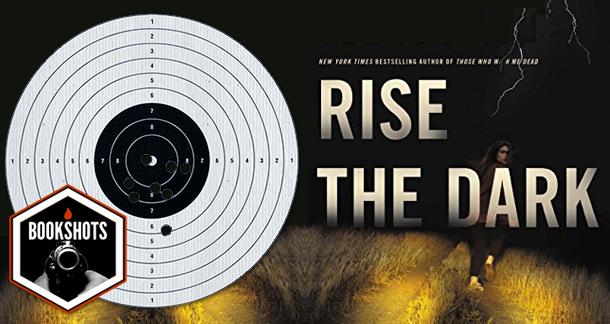 A powerfully written and fast moving novel that combines a terrifying home invasion thriller with a heavy supernatural vibe.

Sabrina Baldwin is grieving the loss of her brother—who previously worked as a bare-handed electric line handler—and adjusting to her new home in the remote town Red Lodge, Montana. Her husband, Jay—also a former bare hander—is called out to work in the middle of the night and creepy ass Garland Webb shows up soon after and kidnaps her. Meanwhile, down in Florida, investigator Markus Novak is retracing his wife’s final hours on Earth before she was killed by Webb. Novak stumbles into some serious weirdness and soon heads off to Montana in pursuit of Webb. Wholesale terror and hilarity ensues!

Nope. For the first time in a Bookshots review, I’m not going to suggest another title, Rise The Dark is pretty spot on.

Once again, Ruth Buzzy and Benny Hill would need to be resurrected. Hill would, of course, play the roles of both Novak and Webb.

Montana … No, way too off the grid.

‘Tell you something, Markus—older you get, the more you realize the only things in this world that can really cause you pain are the people you love …’

Have you ever wondered what it would be like to be compared to Stephen King for your entire career? I think it would be kind of a burden. I mean, don’t get me wrong, I’d be honored at first, but then after a few years, it would grow a little stale. There’s only really two novelists that I know of who have been branded with the comparison. Joe Hill, of course, gets hit with it constantly (although, with his last two novels, Hill’s surpassed his father as storyteller in a lot of ways). But, hey, when you’re the child of the biggest selling novelist—and perhaps the most influential novelist—of the 20th century, comparisons are inevitable.

The other novelist is Michael Koryta.

Ever since Koryta hit the scene with his first PI novel, I’d inevitably read at least one review where he’s compared to Maine’s favorite son. And there’s good reason for it; Koryta’s novels are heavy, cinematic, character driven, near phone book size stories that typically read like they’re only two hundred pages long. Without question, the man’s got skills and then some. The only difference between the two is that Koryta’s a crime novelist who occasionally gets a scary looking bug up his butt and writes a horror novel, whereas King does the opposite.

Koryta’s first foray into the genre, So Cold The River, was a bit of a mixed bag. There were some genuine supernatural thrills in it, but there were also a few missteps. It was a solid first effort into horror, though, and it made me want to read more. I’ve been off and on with Koryta since then and his voice has only become stronger, and thankfully he’s still popping out the occasional supernatural thriller. But since So Cold The River, Koryta has learned some nasty tricks along the way.

His latest, Rise The Dark, is a powerfully written and fast moving novel that combines a terrifying home invasion thriller with a heavy supernatural vibe. Rise The Dark’s antagonist, Garland Webb, is an intensely creepy, Manson like character, but isn’t so gonzo that he seems like a pastiche of the infamous cult leader. Webb is starkly believable and his dark, messianic presence drives the entire novel.

But what I liked most about Rise The Dark is the same thing I like about most King novels, it’s just a flat out fun read. It’s pure, hard driving entertainment that’s meant to transport the reader and allow them to slip into the skins of the characters living through this nightmare. More or less, Rise The Dark is a perfect end of summer read