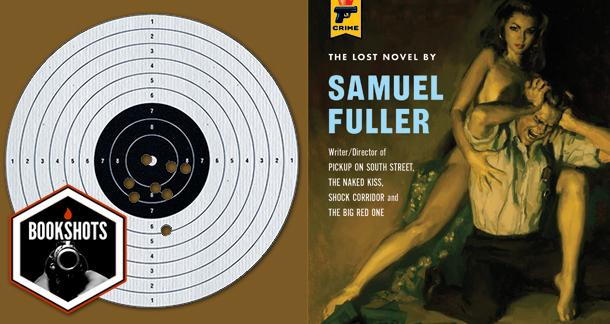 It’s a really shitty trip if it’s happening to you, but a boatload of fun if all you’re doing is watching.

Paul is the consummate bagman: Emotionless, fearless, his face granite and forgettable, the type of man who blends in perfectly with the crowd. But there’s two things that prevent him from being the perfect cypher: His “brainquakes”, seizure like attacks which wrack Paul with gut wrenching pain and hallucinations, and his love for a dangerous woman.

She didn’t believe in redemption when it came to taking a human life. To her that was breaking the law of life, not the law written on some piece of paper. She didn’t believe in the why of murder, in any medical or psychological explanations for it. The hell with why. What, where, when, who. You kill, you’re caught, the door slams behind you. You can spend the rest of your life in a cage, or you can do the decent thing and kill yourself.

I won’t go into director Samuel Fuller’s massive filmography (you should instead go to Jake Hinkson’s excellent essay at the Los Angeles Review of Books for that), but for the uninitiated, the best way to describe Fuller’s storytelling style is trippy. Not surreal, not otherworldly, just plain DMT induced giggles and light trails trippy, but with guns, double crosses, and unseen, unknowable forces constantly raging against you. So it’s a really shitty trip if it’s happening to you, but a boatload of fun if all you’re doing is watching.

Brainquake is the type of novel that could easily be deemed a “psycho” noir, and fits in perfectly with the cinematically-inspired “hardcore” hardboiled style of the early 00’s spearheaded by the likes of Duane Swierczynski, Victor Gischler, and Anthony Neil Smith. It rampages with a quick, steady stream of violence, doomed-from-word-one characters, and a black, slightly zany sense of humor. Fuller’s writing has a staccato Ellroy-esque rhythm (or maybe I should just call it Fuller-esque?) that drives the story hard and fast, only pausing to give us steady glimpses of his shady, albeit likable, over-the-top characters.

No, Brainquake isn’t by any means high art, nor is it meant to be. Brainquake is popcorn and a cherry Coke kind of a novel. It’s not going to make you sit for hours on end staring out the window pondering the wonderfulness/bleakness of existence after you finished reading it. It’s a Saturday matinee and pulp fiction in the purest sense, although there is a depth to it, particularly when Fuller is riffing on his characters. No, the Nabokov is God crowd isn’t going to be into Brainquake, but if you’re the type of reader who can appreciate the need for the literary equivalent of a really great cheeseburger, you’re going to devour Brainquake in one bite.