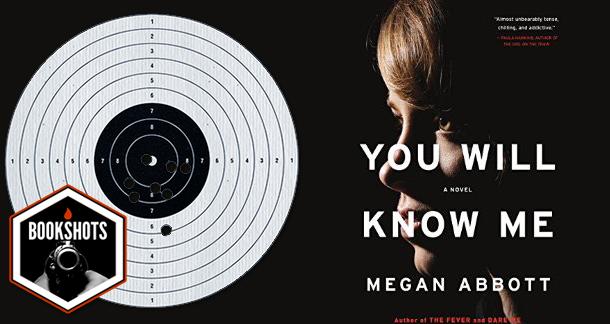 You Will Know Me

'You Will Know Me' is THE must read novel of the summer, and perhaps of all of 2016.

Devon Knox is a gymnastics prodigy and her parents, Katie and Eric, have dedicated their lives to making sure she reaches the highest level in the sport. But when Devon’s gymnasium begins undergoing some much needed renovations, an attractive workman and boyfriend of one of the gym’s trainers starts spending a lot of time around the gym, even after the renovations are complete, and starts paying special attention to Devon. The workman soon winds up dead of an apparent hit and run accident and heart wrenching despair, deception, and hilarity ensues!

Devon Knox: Intense gymnastics wunderkind with more than a few emotional issues to work out.

Katie would be played by Scarlett Johansson.

Eric by a much younger Kyle Chandler (Bloodline and Friday Night Lights).

And you would have to go with a complete unknown for Devon.

I already kind of do, so yeah.

The trampoline was the better story, an easier one, but it wasn’t the truth.

Three-year-old Devon, barefoot, running across the lawn to Daddy.

Her foot sliding on a grass mound, she stumbled into their idling, rust-eaten lawn mower, her foot so tiny it slipped behind the blade guard, the steel sheering off two toes and a squeak of soft foot flesh.

A few feet away, face white with panic, Eric slid to his knees beside her and somehow managed to pluck both toes from the grass.

Packed in ice, they looked like pink peas and Katie held them in her hands as Eric drove with careering ferocity the six miles to the hospital where doctors tried (but failed) to reattach them, like stringing beads, Devon’s face blue and wet.

‘It could have been worse,’ their pediatrician, Dr. Yossrian, told them later. ‘Sometimes with the riding mowers, the whole foot pops off.’ And he made an appalling pucker sound with his mouth”

I’ll be the first to admit that I don’t understand ultra-competitive people. You know the type: The person who is willing to win at all costs. Who drives their body past the point of exhaustion day-in-and-day-out, working past pain, working past injury, and living with the constant anxiety that they’re simply not working hard enough, that they can do better. Don’t get me wrong, I have a bit of a competitive streak, but I entirely compete with myself; I push myself to write just five hundred more words despite the fact I’m falling asleep over the keyboard, but that isn't actually what you would call a physical challenge.

But if I can’t muscle past my exhaustion, I don’t beat myself up over it as I climb into bed. In asshole speak, I guess I’m what you would describe as a “B” type personality and I’m perfectly fine with that. And I guess that’s why I find ultra-driven individuals so fascinating. This is particularly true of athletes, whether they be football players, swimmers, or skateboarders, their drive and energy awes me and frightens me somewhat, mostly because I always ask myself: How far would these people go to win? And do they think about anything other than winning?

But what I find most fascinating/disturbing about these beyond driven individuals is the people who shaped them: Their parents and coaches. Personally, these folks scare the living shit out of me. They frighten me because they don’t live for themselves, they exist vicariously through the accomplishments of the children they raised and nurtured, and more or less give up their individual desires and ambitions and simply become a part of the machine that is the lives of their children.

In my opinion, this is the very heart of Megan Abbott’s masterful eighth novel, You Will Know Me. Yes, the focus of the story rests squarely on the shoulders of gymnastics wunderkind, Devon Knox (albeit the story is told through the eyes of Devon’s once reckless and emotionally damaged mother, Katie). But it’s the actions of her parents, coaches, and her gymnasium boosters which truly drive the narrative of this slickly written psychological thriller. It’s the darkness and horror of the mass consciousness, the overwhelming drive to win at any cost, even if it means rendering their own pseudo-lives to shreds in the process.

Abbott—as usual— is a consummate noirist. She plunges the reader headlong, deeper and deeper down a spiraling rabbit hole that is actually an ever growing pit of despair and deception that originally appeared to be nothing more than an innocent looking, slightly run down, single family suburban home. With each passing page, Abbott ratchets up the intensity of the lives of the Knox family until the reader is white knuckled with anticipation of what abomination will slither across the page next.

And, seriously, I’m not exaggerating when I describe You Will Know Me as a white knuckle thriller. (It’s one of those reviewer cliches that drive me bat shit because it’s rarely, if ever, true.) I read the novel in a single (okay, it wasn’t quite in one shot, but mostly because I spend my days chasing after a six-month-old) sitting, and every time I had to put the novel down, my brain would remain focused on what would happen next and I couldn’t wait to dive back in for more of the twisted lies and conspiracies that the Knox family both endures and welcomes like a BDSM submissive waiting for the lash of their master’s whip.

Admittedly, I am a long time admirer and fan of Megan Abbott, and it seems like every time she comes out with a new novel, it quickly becomes my favorite. But with You Will Know Me, I can honestly say I don’t know how she'll be able to top herself, especially in the hard as nails intensity department.  Simply put, You Will Know Me is THE must read novel of the summer, and perhaps of all of 2016.

I consider "The end of everything" the finest American novel of the new century.  "You will know me" is nearly its equal.  When we talk of Megan Abbott we are talking about one of the finest writers we have,  Her skill and fierce intelligence leave me in awe.  Her ability to suck me in to a world I really care nothing about and make it so compelling, so universal and so unforgettable is stunning.  From her doctoral thesis to her Hollywood noir phase and onto these teen-age girl novels, she dazzles and hypnotizes the reader.  Simple praise is not enough.  She is a master and I will follow whereever she leads.  Do not miss her books.