Bookshots: 'You Don't Have to Live Like This' by Benjamin Markovits 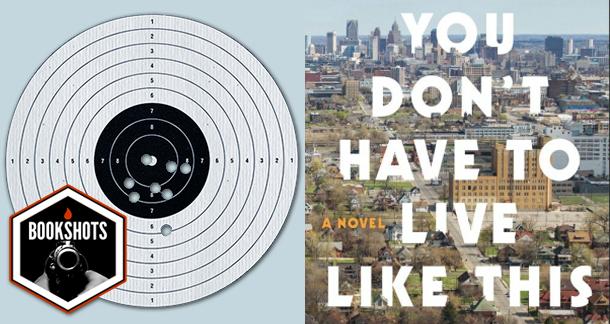 'You Don’t Have to Live Like This' comes at the perfect time, extracting white attitudes about race and justice, and ever so gently forcing us to think about them.

Benjamin Markovits, ex-basketball player and the author of six previous novels, including a trilogy about the poet Byron.

A group of affluent white people attempt to gentrify the Detroit suburbs. Not everything goes according to plan.

I am a Smart Phone Camera

The Brooklyn Follies by Paul Auster, In the Course of Human Events by Mike Harvkey

Greg Marnier, Marny to his friends, thirty-something millennial at a loose end after his return to the States from a teaching job in Wales.

I’ve done the whole gentrification thing in 1980s Edinburgh. Once is enough for me.

Robert insisted on keeping up a black presence in the neighborhoods, partly for PR reasons.

I am a camera with its shutter open, quite passive, recording, not thinking.

Isherwood’s novel Goodbye to Berlin opens with this line. Markovits’ narrator Marny is also a camera. He has that same open-lensed innocence as the young Isherwood in Weimar Germany, taking in the rise of the Nazis and the slow decay of ordinary conscience. Marny doesn’t judge what he sees and hears during his time in Detroit. He simply recounts events, apologizing at the outset for his failings as a narrator, for what his brother calls his ‘this and then this and then this’ approach to telling stories.

Detroit isn’t 1930s Berlin, of course – no brownshirts smashing windows or beating up dissenters here – but Marnie’s band of college chums, now married and raising kids, have a hint of the cold moral certainty, the conviction that ends justify means which sometimes follows in the wake of economic disaster. They also, although they are not aware of it, have the racism. Robert, their leader, conceives of a plan to buy up derelict housing in the city and renovate it. All goes well at first, but slowly problems surface specifically in the form of Nolan Smith, a black resident whose simmering anger at this middle-class intrusion eventually erupts into violence. Marny, involved more or less by chance in the incident, ends up as a witness in a trial where, like a camera, he has to reveal what he has recorded.

In the age of Photoshop and visual trickery, we’re aware that even cameras can lie. Marny doesn’t have the guile for mendacity, but he does discover that the same events can look very different depending on your point of view. As readers we’re given only one: Marny’s, but Markovits is a savvy enough writer to let us glimpse between the cracks in the fence and see how small tensions can build and turn deadly. With Charleston and Baltimore still in America’s cultural rearview, You Don’t Have to Live Like This comes at the perfect time, extracting white attitudes about race and justice, and ever so gently forcing us to think about them, even when, like Marny, we’d prefer just to watch.