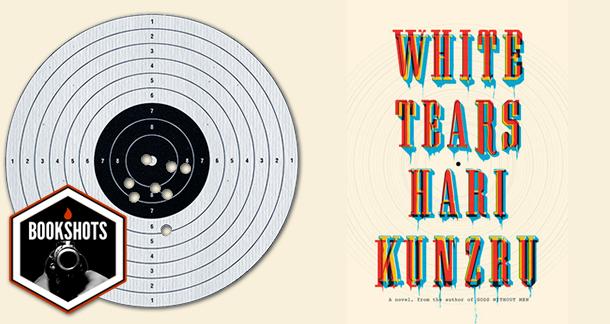 This is a story to savor...The language, the music, the twists and turns: they're all lovely, despite speaking of events so ugly one should want, so very much, to turn away.

The prolific, multi-published author Hari Kunzru, who's only been published in The New Yorker (among many other places), for God's sake. How lame can it get, eh? (In all seriousness, his CV is darn impressive.)

Seth is a lower-middle-class nobody, eking out an existence engineering music with the help of his super-wealthy friend, Carter. When the two stumble upon an audio recording of a haunting old blues riff, they commence an obsessive journey to find its creator. When its creator turns out to be a singer who's been dead for nearly a half-century, and the singer doesn't really stay dead, time and reality shift and blend until, perhaps, a blood-debt has finally been paid.

The Ballad of Charlie Shaw, though I admit I like White Tears a hell of a lot better.

Have you ever seen the movie, In the Mouth of Madness? If you liked that, read this. White Tears is way better than that 1990s campy horror flick, much as I love 90s camp, but it lives in the similar realm of questioning everything a story has to tell.

Seth is an insecure kind of fellow, broke, just out of college, gifted (in his own opinion) at recording and engineering music. For subsistence, he relies on his pal, Carter, heir to the Wallace family fortune, who is fighting his own demons. Carter's sister, Leonie, is a chain-smoking artist/socialite/woman-upon-a-pedestal.

Oh, and there's Charlie Shaw, the blues singer who refuses to stay dead.

I want Adam Driver in this movie, but I can't decide if he'd be better as Tortured Seth or Tortured Carter. I like Michael B. Jordan for Charlie Shaw, because he's divine. Plus Cara Delevingne for Leonie. She's brooding and dark enough.

White Tears spans the country from New York City to rural Mississippi. Oddly enough, that's a drive I made a number of times in my early twenties, so the whole book felt very homey to me. That said, I'd live in Manhattan or Brooklyn, but not so much rural Mississippi. Been there, done that, don't need to do it again, interesting as my time there was. I'm a city girl at heart.

What was your favorite sentence:

I highlighted dozens of paragraphs and phrases in this book. Here are just a few.

"Rich people grow organizations around themselves like hair or fingernails." (Pertinent in these troubled times, don't you think?)

"The back of the bus is a place of lottery tickets and ritual candles, fast luck and money drawing, because all the riders know it would take a miracle for good fortune to settle on these shiny fabric seats." (Ouch!)

"All day from can to can't." (Describing life in a prison work-camp. Wow. Simple, stunning, and razor-sharp.)

"When you listen to an old record, there can be no illusion that you are present at a performance. You are listening through a gray drizzle of static, a sound like rain. You can never forget how far away you are. You always hear it, the sound of distance in time. But what is the connection between the listener and the musician? Does it matter that one of you is alive and one is dead? And which is which?"

I waited until the last possible moment to write this review, although I finished the book almost two weeks ago. Here's the thing: when White Tears ended, I wasn't ready. I wanted more time with it. The path it took wound and meandered through different times, voices, and places; by the end, I was devastated to see it go. Thus, I let myself ponder it. I let it wind and meander through my thoughts until, finally, I was able to sit and write about it.

It's a tale of heartbreak, broken promises, and of power wielded in so devastating a way that the consequences span generations.

This is a story to savor, though. The language, the music, the twists and turns: they're all lovely, despite speaking of events so ugly one should want, so very much, to turn away.