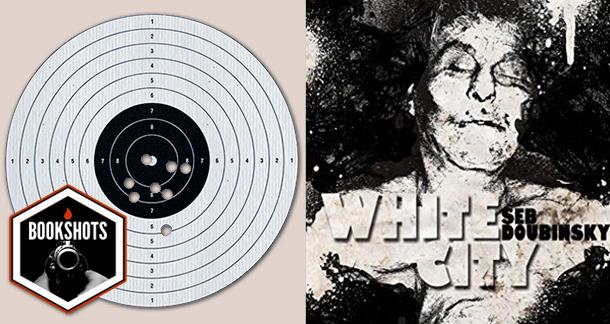 Seb Doubinsky, an established author in France, now making a splash in the US with titles like Goodbye Babylon and Song of Synth. Doubinsky teaches French literature and history at the University of Aarhus, in Denmark, where he lives with his family.

The lives of a sidelined TV reporter, a best selling horror writer, and a disgraced cop collide after the murder of a notorious right wing cosmetic magnate, and the emergence of his creepy heiress "sister."

We Are All In the Gutter, But Some of Us Are Licking Our Own Arse

DeLillo’s Running Dog  or anything by Hunter S. Thompson, Philip K. Dick, Borges, Bolano, Michael Moorcock or the haunting German political thriller, The Lives of Others.

There are three main characters, although you could argue that Lee Jones Jr, the dislocated writer, is a kind of alter ego for the displaced Mr Doubinsky. Lee Jr. is a great character because he's a best selling novelist in New Babylon yet relatively unknown in Viborg City, where this novel is set. He tries to find room to move in his anonymity, and has a close but diminishing underground support group, but by his own admission, his best, and possibly only friend, is his laptop.

Eric Bana—an Australian-born actor who’s just good looking enough to play a hot writer-dude without coming across too phoney. Plus he has a nice smile, which kind of sums up White City—a smiling word-assassin of a novel.

Every Dog Poem is a trip, but apart from those, this:

Everything in this city felt artificial, as if it didn’t exist. The king, the rich, the poor, the immigrants, morals, work, passion, everything was thin air. And he choked on it.

White City is a fiction about a fiction (jelly-fish cells as a source of eternal life) about a fiction (Nazi occultism), which makes this deceptively fun and stark little read much more than the sum of its parts. In other words, everything in this world, like our own, is so interwoven that the thing is a game, but with deadly consequences. Or as Doubinsky puts it:

Doubinsky is a political writer with a great sense of the absurd, with a DeLillo-esque pitch perfect comic timing. Each chapter in White City bears the title of a tabloid newspaper heading under the guise of popular science or historical myth: “What kind of vegetarian was Hitler?” "The Longest Lasting Nail Polish Is Also the Cheapest." WTF! The story is also littered with the diary entires of a cosmetic demagogue (“Little by little, we are progressing...”), nationalistic rants (“White is the mother of all colors”), beauty slogans, and Dog Poems.

Because what would a Doubinsky novel be without dog haiku?

White City is a political novel thinly disguised as an experimental novel thinly disguised as a crime story (with dog poems), in the guise of beautifully realized dystopian science fiction— so it works, like Homer Simpson says, on so many levels. White City is a riddle, an anarchic collision of the past, the present, and our own disturbing future where nothing adds up, everything makes a kind of lethal, Rabelaisian sense, and while there is no such thing as luck—or immortality—there is the possibility of a second chance. Doubinsky's optimism is a punk holdover from the days when happiness was an uninfected piercing and a bouncer who didn't hate your guts.  Not necessarily in that order.

So as well as the political intrigue, White City's fragmented science-fiction casts its klieg lights onto a future scarily, terrifyingly, NOW. Because there's that thing with make-up and jelly fish cells and being, or looking, forever young, yeah? Or when the wardens of Viborg City see a sordid sex crime as an excuse to expand racial profiling and tighten the borders. Either way, White City pulsates with rock 'n roll prescience—the hallmark of all good sci-fi.

But for me, the true, most intense pleasures of White City are the way in which its characters, like Doubinsky himself, as displaced in his own White City as I am in mine, negotiate the minefields of exile. The Faustian bargains, the daily rationalizations and forced star-gazing it takes to remain in a home in which you are not…. at home,  are mirrored not only in Lee Jr’s own repressed rage, not only in the "fiction" he writes, but also, in the finger-crossed-behind-their-backs deals each character in this novel, good and bad, makes with that old fleabag, the truth.