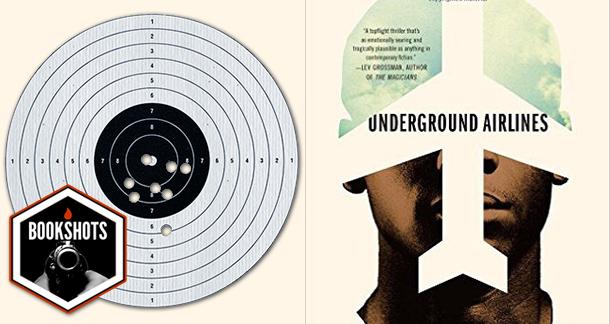 'Underground Airlines' fabricates a fascinating fictional world and gives you an incredibly complex character to explore it with, ensuring that your attention is well-spent down to the last page.

In an alternate version of America, the Civil War never happened, and slavery has remained an integral part of the country into the modern age. The Underground Airlines are a loose network of abolitionists who smuggle escaped slaves to freedom. Victor is on the trail of a runner, but something isn’t right about this slave’s case.

A Planet for Sale by Yoss

Victor, a former runaway slave turned soul-catcher: an undercover operative used by the US Marshals to track down and recapture escaped slaves. Although disgusted by his job and what he’s become, Victor will do whatever it takes to survive, working for the devil to earn his own freedom.

Michael K. Williams, best known for his portrayal of Omar on The Wire.

Just like in the real world, if you’re white and wealthy, you’ll be fine. Can’t really recommend it to anyone outside that demographic.

His tone was always the same, cold and unbending, like iron, the hint of a southern accent coming up off his voice like the whisper of smoke from a gun barrel.

Underground Airlines is one of those social-minded alternate histories that takes a terrifying premise and uses it to hold up a mirror to the flaws we ignore in our own world, and it performs that function stunningly well. The most harrowing revelation of the story isn’t that slavery still flourishes in 21st century America, but how very little that fact changes the socioeconomic reality of living in said country. The differences between the real world and the one of the book are subtly woven into the framework of a fugitive pursuit procedural, rarely using big exposition dumps to fill in the gaps. Underground Airlines is a masterwork of world-building. Slaveholding companies look and operate much like the massive corporations of our world, treating their employees only as humanely as the law demands, and maybe a little less where it proves profitable. Numerous government and private organizations exist to oversee the proper treatment of slaves, but of course these are all corrupted by extremists from both sides. The ugly truths of a brutal industry are sanitized to pacify the public—slaves are transported to the fields by underground trains so white executives don’t have to see the human toll of their work, but they also don’t use the word “slave.” They are Persons Bound to Labor, often shortened to the barely offensive-sounding PB. But the real star of the show is Victor, the former runner turned slave-catcher. His inner conflicts are so vividly rendered that the character is truly unpredictable—you’re never sure if he’s a good man forced to do bad things, or a bad man who is finally going to do some good. At each major turning point in his arc, I was never certain which way Victor would jump. Underground Airlines fabricates a fascinating fictional world and gives you an incredibly complex character to explore it with, ensuring that your attention is well-spent down to the last page.