Bookshots: 'Treat Us Like Dogs and We Will Become Wolves' by Carolyn Chute 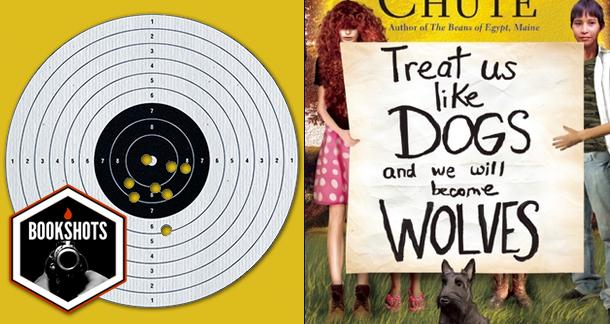 Treat Us Like Dogs and We Will Become Wolves

Perhaps best known for her first novel, The Beans of Egypt Maine (which was made into a movie), Carolyn Chute is an author and political activist known for her passionate defense of the right to bear arms set out in the 2nd Amendment to the Constitution.

Based on a number of provocative phone calls to the local paper alleging everything from child abuse to child slavery to polygamy to a possible Waco scenario complete with stockpiles of guns, Ivy Morelli, feature reporter, is sent to meet a reclusive group known as “the Settlement”, or sometimes “the Home School”, to investigate. What she finds is not what she expects —or what we expect. The charismatic leader of the group pulls her in and has a way with females that most men just dream about. But is he everything he seems?

Phone calls to the local paper, allege everything from child abuse to child slavery to polygamy to a possible Waco scenario complete with stockpiles of guns...

I would call it: Do They Have Guns or Not?

Stranger in a Strange Land by Robert Heinlein

The focus of the book is Guillame “Gordon” St Onge, a big bear of a Maine backwoodsman and dyed in the wool isolationist with a messianic quality, often overpowered by the “family” he’s created in rural Maine.

A 30-something Gérard Depardieu in his charismatic prime with a Maine accent.

The story is set in southern Maine with no discernible major cities nearby; it’s an idyllic setting and sounds very beautiful. I can picture it without effort and yes, would happily live there.

And what are those at the other end of the bed sticking up under the blanket? He can’t remember exactly the words. Hooves? Handles? Claws?

This is an odd book, make no bones about it. It is written as a series of excerpts from people’s lives and memories, interspersed with proclamations from Mammon, the Media and aliens (who aren’t) labeled just “The Greys”, as in the popular visitor from another planet. Each section is set out with it’s own icon to help distinguish between the various voices.

This is a heavily political book based on Chute’s leanings toward the fringe militias and the message is clear: America is ruled by the rich and anyone who thinks otherwise is going to get stepped on and hard. I guess it portrays the sort of community society a lot of people aspire to but which often goes wrong, a la Waco, the Heaven’s Gate tragedy or Jim Jones’s poisoned Kool-aid in Guyana: a society where individuals matter and want to be able to rule themselves. Something that organized society tends to frown on.

I spent a great deal of the book wondering what the hell was going on and, although I liked the Settlement people, it felt like they were just tempting fate — just asking for trouble. This is a follow-on from Chute’s 2008, 2,000 page mega-book The School on Heart’s Content Road, but it explores the same themes of a group of outsiders and the way outsiders view and deal with them.

While I’m not sure I can recommend this book, it’s a lot shorter than the previous version. Still, it’s worth a look if you’re trying to understand what makes people set themselves aside from the mainstream and try to carve out a niche for the way they want to live.

I loved, loved, loved The Beans of Egypt, Maine (the only one in my Lit class to feel this way; everyone else hated it). I had no idea it was made into a movie though! Have to check it out.