Bookshots: ‘Three Moments of an Explosion’ By China Mieville 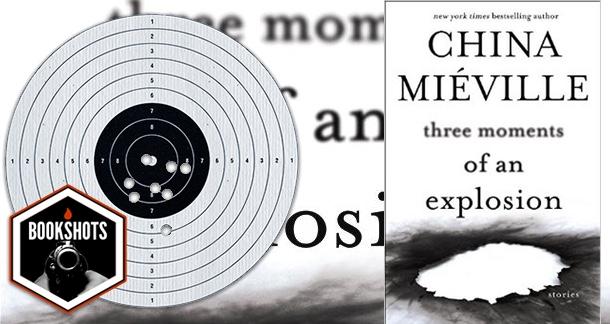 Three Moments of an Explosion

What’s most striking about the collection is the sheer range of Mieville’s storytelling skill.

It’s a HUGE short story collection, so the plots are varied and many.

Anything by William Gibson and Jeff VanderMeer

Please see ‘Plot in a Box’.

Please see ‘Plot in a Box’ and ‘Meet the book’s lead’.

Most of the stories take places in the UK, so I guess so.

A man staggers in a book-lined library. A zombie clings to him with all its limbs, biting his chest. It stares at him. The stitches go through both their flesh and clothes.”

Don’t get me wrong, Perdido Street Station and The City & The City, those are my jam, but Mieville’s first short story collection, Looking For Jake, knocked my socks off, and so did his massive new collection, Three Moments of an Explosion.

What’s most striking about the collection is the sheer range of Mieville’s storytelling skill. There are brilliant pieces of flash SF such as the title story, "Three Moments Of An Explosion", bizarre experimental pieces such as the zombie movie trailer script, "The Crawl" and "The Condition Of New Death", and more traditional SF such as "In The Slopes". Now I’m not going to say Three Moments of an Explosion is an instant classic in SF/F, I’m not going to compare it to The Illustrated Man or The Imago Sequence, because like any career spanning collection, there are a few clunkers in here. But for the most part, Three Moments Of An Explosion is a dense, highly enjoyable short story collection and an excellent introduction to potential new readers of China Mieville.