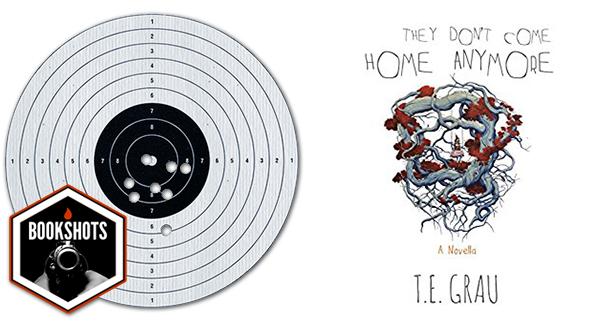 Grau sets the scene with assurance... poking holes in tropes and creating new ones to put the cherry on top of this sundae of desperation and misguided loyalty.

A chance encounter in the restroom leads to an introverted girl befriending the most popular girl in school, who promptly becomes terminally ill. Hettie would do anything to help her new best friend.

Grau's original title was B.F.F. I would call it Besties. Or Let the Wrong One In, if I was feeling punny.

Grau's critically lauded collection The Nameless Dark, Let the Right One In, the catalog of This Is Horror.

Hettie, the aforementioned introvert on a mission to save her dying friend. The girl is not what she seems.

The story seems to take place in an every-suburb of loners and teen angst. Been there, done that.

Like any story set in high school, They Don't Come Home Anymore is about belonging. The need to connect, whether to an individual or a larger social group. The "cool kids." Goths. Religion. The eternal undead.

As is frequently the case with these types of stories, it is also about obsession. Obsession is usually blind, at least to certain salient facts, willfully or otherwise. Hettie is blind to the realities of her situation, which makes her story all the more pathetic. This makes her more sympathetic to the reader because, hey, we've all been there. Just not to this degree.

Notice I haven't mentioned the V word, because that's not really what this story is about. But that element is there, combining old and new, poking holes in tropes and creating new ones, to put the cherry on top of this sundae of desperation and misguided loyalty. Grau sets the scene with assurance, meting out information in such a way as to keep us guessing about the inevitable. Because we all know how this story ends, right?