Bookshots: 'Year of the Goose' by Carly J. Hallman 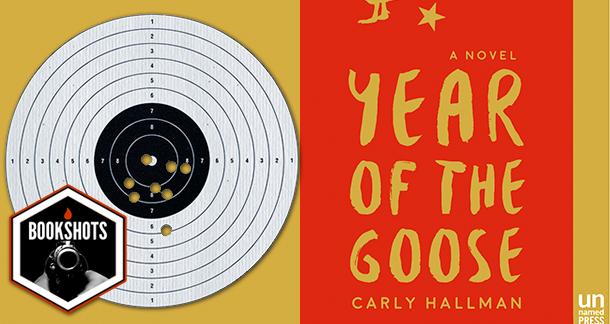 Year of the Goose

If you run a fat camp where one of the campers falls in the shower and dies, it's not a great idea to club any nearby child witnesses on the back of the head before stashing the corpse in a closet.

The heiress of a snack food empire is determined to improve herself and her surroundings, but the corporate fat cats around her aren't very interested in changing anything. That's how the story begins, anyway, before getting significantly stranger with every chapter.

Anything that involves geese. Geese are fairly important here.

The Kidney Hypothetical: Or How to Ruin Your Life in Seven Days by Lisa Yee, and Help! A Bear Is Eating Me! By Mykle Hansen

Kelly, a highly enthusiastic and extremely misguided do-gooder who happens to be the estranged daughter of China's richest man.

I've always wanted to visit China, but the events in Year of the Goose make me question that desire. There's plenty of government and corporate corruption at home without need to travel abroad.

How can we trust anyone anymore? Children killing parents! Heiresses killing tycoons! I for one am stocking up on Tangerine Crumbly Cakes...

Here are a few things I've learned from Year of the Goose: if you run a fat camp where one of the campers falls in the shower and dies, it's not a great idea to club any nearby child witnesses on the back of the head before stashing the corpse in a closet. Also, witches make great snack foods and geese are horrible pets.

As may or may not be evident from that last paragraph, Year of the Goose isn't the easiest novel to summarize. Fans of absurdism and Bizarro fiction will likely find themselves at home in Hallman's writing, which careens wildly from one improbable scenario to the next. Kelly is the California-educated daughter of Chinese snack foods tycoon, Papa Hui. Reluctantly appointed head of Corporate Social Responsibility at the family business by her rather uninterested father, Kelly is determined to prove her worth. She begins by investing in a camp for overweight children, but it quickly becomes apparent that most of the cash is going straight into a couple of crooked official's wallets.

There are no perfect characters here. In fact, Hallman's depictions of Chinese society border on misanthropic, and her observations are by no means only applicable to that part of the world. Kelly herself is a bit of a monster who used fear tactics as a child to torture her former nanny into compliance among other transgressions. Additional characters include Lulu Qi, a woman with some of the world's most valuable hair, and a monk from Lhasa who died three days ago and has been reincarnated as a turtle (“it was this or a dung beetle. We all make choices”).

It's the kind of book that makes you laugh at a lot of inappropriate things, which takes a very particular kind of talent. If you're laughing one minute, you're asking yourself why something is funny the next, and the answers may be a bit disturbing. Acidic and slapstick, Year of the Goose is a satire as sharp as a gleaming beak or a pair of beady black eyes.