Bookshots: 'The Wonder' by Emma Donoghue 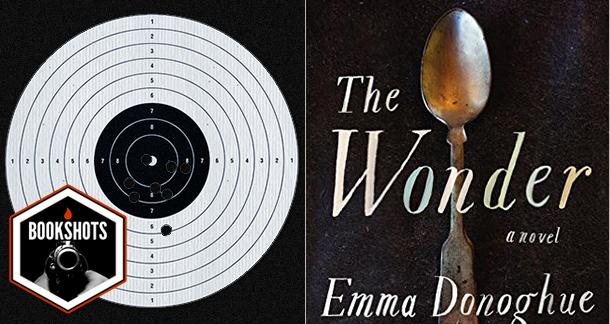 If you’re looking for a mystery with palpable atmosphere, this is a good read. It has a strong, quick-witted female lead...and the period details lend a nice degree of verisimilitude.

Emma Donoghue, Irish playwright and novelist best known for her novel Slammerkin being awarded the 2002 Ferro-Grumley Award for Lesbian Fiction even though it contained no lesbian content, and, of course, the critically acclaimed novel and movie Room.

Mrs. Lib Wright is a widow and “Nightingale”, a nurse trained by Florence Nightingale on the battlefront of the Crimean War. She is summoned to a small town in Ireland named Athlone to attend a young girl, Anna O’Donnell, who has not eaten in four months but appears perfectly healthy.

Everything Tasted of Peat

Agnes of God, Jane Eyre, The English Patient, The Woman in Black, The Name of the Rose

Lib Wright — a 25-year-old nurse haunted by nightmares of dying soldiers crying for tobacco and a long-dead husband. She’s sentimental but disciplined, abides by the doctrine of her Matron and approaches everything with a healthy skepticism. She only wants what’s best for her patient.

Anna O’Donnell — Ethereal in her devout Christianity, the 11-year-old is an enigma. From a rich family, she spends most of her time reading and praying, and is not bothered her lack of appetite and deteriorating health. Impudent at times, she has a good heart and bonds with Lib like sisters in arms.

William Byrne — A big city “scribbler”, a reporter for the Irish Times, his lopsided smile doesn’t preclude his tenacity. He’s there to report a story and although he’s a little backwards thinking when it comes to women, he’s forward-thinking for the times. His “crisp realistic attitude” is a relief to Lib who feels herself surrounded by zealots.

Lib Wright — Emma Watson, although it may be a cliched choice. She’s strong-willed, book smart and hardened by the world. There’s a vulnerability there under an armor of professionalism. It also doesn’t hurt that she’s the right age and English.

Anna O’Donnell — Millie Bobby Brown, hot right now as Eleven on Stranger Things. She’s 12 and born from British parents, so there’s that, but mostly it’s her quiet calm and  intensity that would work for Anna. She operates almost entirely on instinct, and Anna similarly is a creature of assured faith. The movie would have to be made soon, though, so she doesn’t age out!

William Byrne — Sam Claflin, that of Finnick from The Hunger Games. He has the boyish good lucks of William, while projecting an air of haughtiness. At his core, however, he seems like a kind person while also exuding intelligence.

Rural Ireland “in the exact middle of the country” in the mid-19th century, and not one bit. It’s cold, damp, the countryfolk are superstitious and it’s the “hungry season” in which food is scarce as potatoes aren’t harvested until autumn.

Anna reminded Lib of a princess under a spell in a fairy tale. What would restore the girl to ordinary life? Not a prince. A magical herb from the world’s end? Some shock to jolt a poisoned bite of apple out of her throat? No, something simple as a breath of air: reason.

There’s a lot going on in this book. There’s the transition of women into the workforce in a significant way as they struggle for respect. There’s the clash of science and religion as Lib applies her analytical mind to what others would deem a miracle. There’s a bit of old-fashioned screwball romantic comedy with Lib and William as an initial meeting involves mistaken identities. There’s a foreboding sense of dread that hovers over the town of Athlone that Donoghue lays on thick. And provocatively, there’s a fascinating exploration of the class and cultural differences between the English and the Irish, that old hatred.

Fans of Room will have a similar takeaway here with the dynamic between Lib and Anna that Donoghue captures so well. She understands the voice of a child, and makes Lib all the more engaging for not having her talk down to her charge. Donoghue has a curious predilection for parentheses, something she uses to signify asides and offhand thoughts. There’s also intriguing glimpses into Lib’s head, denoted by paragraph breaks and italics, that read like staccato stream of consciousness on a medical notepad.

If you’re looking for a mystery with palpable atmosphere, this is a good read. It has a strong, quick-witted female lead out to uncover truths, and the period details lend a nice degree of verisimilitude.