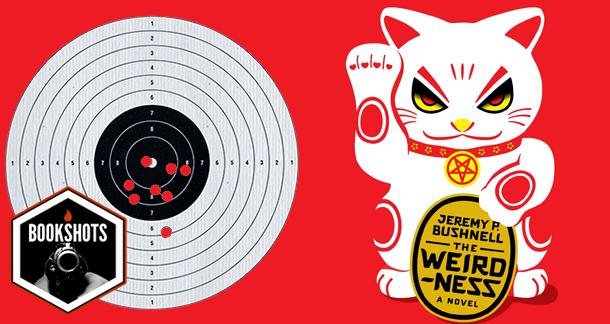 'The Weirdness' embraces a strong sense of humor that borders on slapstick. Bushnell obviously relishes the bizarre, the quirky, and the off-centered.

Struggling writer Billy Ridgeway wakes up one day to find Satan on his sofa. In exchange for saving the world from a powerful warlock, he offers Billy a book deal.

How to Become a Bestselling Author and Saved the World from a Flaming Neko Cat of Doom.

Hmm, yeah, I like the original title better too.

The Scott Pilgrim series by Bryan Lee O'Malley, John Dies at the End by David Wong

Would I want to live in New York City? Possibly, but not in the cupboard-sized apartment that Billy shares with his Norwegian giant of a roommate.

'PowerPoint is actually quite unfairly maligned,' Lucifer says. 'In the right hands, it can produce presentations that convey a lot of information and border on the beautiful.'

Our research revealed that Bushnell does not, in fact, represent a new guard of innovative writing, but that he is merely the latest to stumble, wide-eyed, into the ravaged storehouse of tired forms and stale devices…

In actuality, none of that is true of The Weirdness. The above is a piece of criticism lobbed at the book’s protagonist, a struggling writer/deli worker from New York City. A significant part of The Weirdness is about the writing life (typically a plus here at LitReactor), and that involves occasional scathing internet reviews. The fact that online reviewers are a negative catalyst for some of the major plot events in Bushnell’s story makes writing an online review for it seem a tad ironic.

Regardless of this small paradox, however, I enjoyed reading about Billy Ridgeway. He’s classic unlikely hero material, and rather refreshing. He definitely is the kind of guy who would work in a Greek deli, and not someone likely to save the world or go battling warlocks. As a result, he’s quite relatable. Billy can be a bit frustrating at times, however. He is, in fact, so lazy that it actually slows the plot. When all the main character wants to do is watch Netflix or smoke weed, even having the King of Hell pop by for a visit isn’t always enough to propel things forward.

The Weirdness embraces a strong sense of humor that borders on slapstick. Bushnell obviously relishes the bizarre, the quirky, and the off-centered. It’s not the easiest book to write a serious review on. But the problems Billy faces— self-acceptance, the struggle to find fulfillment versus getting a “real job” – are problems that most people, and particularly writers, face every day.

Overall, The Weirdness is a fun diversion, and a relatively short one. It’s a fitting and lighthearted book for anyone in need of a break from a long and snowy winter.

Tell me more about the Norwegian giant....