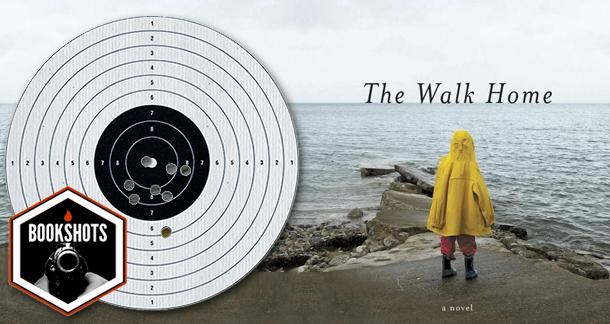 Although Seiffert likes a big backdrop for her stories, her writing actually concentrates on the same exquisitely tiny corner of the human canvas as Alice Munro or Anne Tyler.

Rachel Seiffert, whose debut The Dark Room received a Man Booker nom. In fact, everything Seiffert has written gets some kind of award. Let’s see if The Walk Home performs true to form.

Orange is the New Orange

Although Seiffert likes a big backdrop for her stories, her writing actually concentrates on the same exquisitely tiny corner of the human canvas as Alice Munro or Anne Tyler.

Stevie, the youngest in the clan, and most recently caught in the crossfire of religion and politics.

Ewan Bremner in his Trainspotting days.

Glasgae! Home of the best fish and chips on the planet and some of the dodgiest pubs. I pay it the occasional visit, but prefer to keep those visits short.

Stevie found Nebuchadnezzar too, dressed up like an Orangeman for the Walk: a big man, laid face-down on the canal bank.

First a short anecdote. Many years ago, as I droned away a winter in the hive of the Scottish government, a fellow worker bee (let’s call him Jimmy) gave me a Christmas card. I put it on my desk with the others and later, another bee (let’s call him Robbie) loitering during tea break spotted it. Robbie picked up the card and eyed the large halo adorning the head of the Virgin Mary. ‘Whae’s this fra?’ he enquired. ‘Jimmy,’ I told him, ‘why do you ask?’ (how innocent a bee I was back then). Robbie replaced the card. ‘Niver knew Jimmy wiz a pape*,’ he said.

Seiffert had a big hit with her debut –The Dark Room – three novellas set in post-WWII Germany, which used the lives of the unexceptional to throw a forensic spotlight on post Holocaust guilt and retribution. This formula, combined with an ear for dialogue and the kind of effortless prose that takes many drafts to perfect, catapulted Seiffert into the ranks of Granta’s ‘Best Young Novelists’. Seiffert, in literary terms, had arrived. In The Walk Home, she takes another Big Issue, this time the Northern Ireland Troubles, locating her story in Drumchapel, a part of Glasgow, where the blood in men’s veins runs Orange and once a year the Billy boys put on their bowler hats and walk the walk with fife and drum.

The family of The Walk Home are part of this uber-Proddy** milieu, and the thrust of the story is to examine the conflict between culture and family. Graham, Steve’s Dad, plays the drum for the local lodge. Linsday, Stevie’s Mum, wants him to move on. The fissure lines become cracks and Stevie has to deal with the fall out. The walk home becomes his efforts to reconcile his fractured beginnings.

It’s a large story writ small. Despite the opportunities for drama — the Troubles is a long disturbing saga of bombings, riots, a shoot to kill policy by the British Army, hunger strikes, torture, curfews and disappearances (In 1972, over 500 civilians died in Northern Ireland as a direct result of the unrest, making it more dangerous than the Gaza strip) — none of this enters Seiffert’s frame. There are hints that Lindsay, who comes from the wild frontier between Northern Ireland and Eire, may have witnessed violence, but hinting is as far as Seiffert goes. The family of The Walk Home lives its life in relative peace, untouched directly by the bloodshed across the Irish Sea. We’re supposed to believe, I think, that such events have resonances, even for those outside them, in the same way as the last character from The Dark Room is deeply affected (to the point of marriage breakup) by the discovery that Grandad spent his war helping the Waffen SS deal with the Jewish problem. It’s telling that of the three novellas, this was the weakest, and The Long Walk suffers from the same problem — that of dilution. Without direct experience to motivate the action, the stakes are lowered. The characters are interesting — Uncle Eric who produces line drawings of Biblical stories enacted on the Glasgow sink estates, is a stand out — but the scenery is domestic.

The resonances of the Troubles ring very faint now. Yes, the Billy boys still march the streets of Glasgow, but over the water the second ceasefire holds. Robbie called Jimmy a pape, but the two of them worked together amicably enough. However strong the grudge between their tribes had once been, it wasn’t the stuff of drama.