Bookshots: 'The Trouble with Brunch' by Shawn Micallef 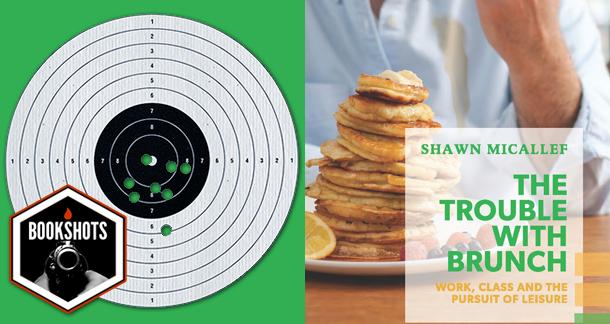 The Trouble With Brunch

Changes in how we brunch say much about how life has changed for white collar workers over the last three decades.

Shawn Micallef, columnist with the Toronto Star and author of Stroll: Psychogeographic Walking Tours of Toronto. I sense he may be Canadian.

A blend of personal history and social commentary about the transformation of the middle class from white collar workers with a semi in the suburbs to creatives writing for websites from their ‘office’ in the local Starbucks.

Creatives of the World Unite!

Brunch: arty, image conscious, happy to be tipsy at eleven on a Sunday.

Someone Canadian obvs. Did you know Seth Rogan is Canadian? Or Rachel McAdams?? Or Ryan Gosling??? Me neither. Anyway, none of them are as suitable to portray the upwardly mobile, faintly hipsterish charms of brunch as Michael (also Canadian) Cera.

Anywhere that serves cocktails before midday is home to me.

If Nero were around today, he would have brunched as Rome burned.

The Trouble with Brunch forms part of Coach House Books' Exploded Views series — essays on the prominent cultural issues and figures of the day — and although the title suggests something foodie, this bite-sized polemic concerns itself less with Eggs Hollandaise and more with class, culture and social change.

Brunch and the business of brunching acts as a social marker, argues Micallef. Middle class people brunch — Micallef doesn’t go into why this might be, although the habit probably stems, like many middle class habits, from a perception of how the landed gentry live (all horses, chafing dishes and outré sexual practices) — and, Micallef explains, changes in how we brunch say much about how life has changed for white collar workers over the last three decades.

Brunching has taken off. Brunching is big. Brunching has moved from dark-panelled hotels to trendy coffee shops to serve a new clientele. The middle class ate brunch to celebrate Uncle Harold’s fiftieth. Their replacement — the creative class — eats brunch to be cool, and beneath Micallef’s impish descriptions of shivering hipsters waiting in line for admission to the latest bruncherie, lies a serious point. For the creative class, social capital (finding the coolest place to eat) has replaced real capital ($). We used to earn money. Now we earn upvotes on Reddit.

Thought-provoking stuff indeed, and Micallef allows himself a muted rallying cry at the end of his thesis. The middle classes used to unionise. The creative classes lack a cohesive identity. Unless we form one, and pretty darn quick, we’re going to end up earning our living in call centers, or behind reception desks, and creating on the side.

The Trouble with Brunch is a well-informed, entertaining, easily-digested read. Anyone who wants to make a living doing what they love instead of what they have to should take a bite.