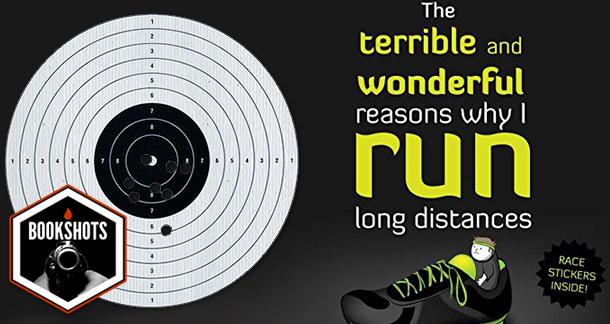 The Terrible and Wonderful Reasons Why I Run Long Distances

Matthew Inman, aka The Oatmeal. Yes, that Oatmeal. The one who creates brilliant web comics and has been entertaining us for years.

This is a graphic-novel-memoir-thing—a conglomeration of stories and lists and images all designed to help The Oatmeal explain exactly why he runs long distances.

If you're not a runner, you may be thinking, "That requires a book?" Let me tell you now: Yes. It does. Sort of.

Also read this if you enjoy the humor presented at The Oatmeal. There's plenty of humor within these pages.

This is a memoir, and thus the book's lead is its author. Its creator. Its fearless leader. Matthew Inman, aka The Oatmeal, was once a fat kid. Now he's a fat kid in a runner's body, forever running from an evil beast called the Blerch.

It's gotta be Jerry O'Connell. He played Vern in Stand By Me, the quintessential tubby kid. He grew out of his tubbiness (and into hotness), but I'm sure the tubby kid still haunts his dreams.

That said, I have no idea if The Oatmeal is actually hot. Nor do I care. Runners aren't auto-magically hot, I promise you, but if this is a movie, we're going with a hot actor. Or at least someone who was hot ten years ago.

Okay, enough about hotness. Let's move on to....

Inman lives in Seattle, which is a city I'm dying to one day visit. But based on what I know of the weather, and my experiences this summer in a very soggy southeast, I don't know that I could handle the rain of the Pacific Northwest. Of course that's just a personal preference...

There's also this scene in the book involving a long run in Japan and some Killer Wasps from Outer Space, and no, I don't want to live with the wasps.

I run because this is the only way I know how to quiet the monster. I run because, deep down, I am the Blerch."

You don't have to read the book to understand the Blerch. You need only know the feeling of insufficiency that haunts us all. I, too, run to quiet monsters. I, too, am the Blerch.

The Terrible and Wonderful Reasons Why I Run Long Distances began as a web comic. The book is an expanded version of the original comic, as far as I can tell, and there are RACE STICKERS that come with the book, so although I don't yet have the hard copy, clearly I need one. I love stickers.

I read the original web comic about a year ago, on a warm, rainy afternoon, while my husband and child sat nearby building Legos, and I'm not going to lie...I cried a little (okay, a lot) while reading it. Seriously. As a runner (I have a half-marathon coming up next weekend, in fact), it hit so close to home that I cried. I had a moment. It was like, "Ohmigod, he understands! He gets it!  The Oatmeal knows exactly why I run too!"

Running is so often a solitary thing. Even when you run with someone, you're alone in your body. You have aches and pains and things going on inside your joints and muscles and digestive system that are embarrassing and weird and you don't ever want to share them EVER.

Inman shares them. He talks about outrunning the beast (the Blerch) who tells you to sit down, run slower, to quit and to allow life and time to take their toll on your body without ever caring about those extra ten pounds you carry. He talks about the pain of a long run, but also the elation that follows. The "I'll never run again" feeling that lasts only until your post-run shower. He understands.

So yeah, I cried when I read the original comic.

The second read for this review, and the first read of the new material, was never going to live up to that first, eye-opening experience. In a way, that experience was sacred to me, so reading the actual book could only be a let-down. The expanded material isn't as impactful, isn't as startling. But I love it anyway, for the memory of that first read, and for my gratitude at knowing there's someone out there who really, really, really gets it.

So I think you should read it too, especially if you're a runner. Let me know if it makes you cry.

I got my copy yesterday.  The run stickers are cute.  But The Oatmeal gets it.  He drives right into the very soul of why we get up at o'dark-thirty, put on ugly neon spandex and huff and puff into the cold night while everyone else is still drooling on their pillows.

We're all fighting a Blerch of one kind or another.

Okay, phew. Got that out of my system.

I have about a dozen Blerches I fight. Running helps so much. I can't imagine life without running.

Also: the picture he drew of a runner's body? Big on the bottom, little on top? Yeah. I almost died laughing. I actually need to wear my big-girl jeans when I'm running a lot (I'm not always the most consistent of runners) to accomodate the fact that...well...Sir Mix-a-Lot would really like me. :) I get skinner when I stop running. It's so bizarre.

I hear you.  I got fitted for a bridesmaid dress last year.  Skinny on the top, skinny in the middle, two sizes larger for the bottom.  Say what?!?

I started listening to audiobooks when I run long now.  I can feed two addictions at once.  It is pretty glorious.

Hahahaa, that makes me feel BETTER! :)

From the corner of my closet floor the lycra calls me...soft yet persistent...

My running shoes find their way mysteriously to places where I will trip over them. Slip us on they wheedle. You know you want to.

The terrible pain of my last half-marathon, the tooth-gnashing agony which made me swear, eyes streaming that I would NEVER do this again...it fades...it fades....

Runners Choice - I have just been doing half marathons for the last couple years. I have wanted to do a full but not really had the push. Number three is giving me the reason to start up. Thank you.

Lorraine-When I was a kid, my dream was to be a marathon runner,Now it seems that my dream is impossible.This post evokes my memory but I still want to say thank you.