Review by Stephanie Bonjack February 2, 2017
In: 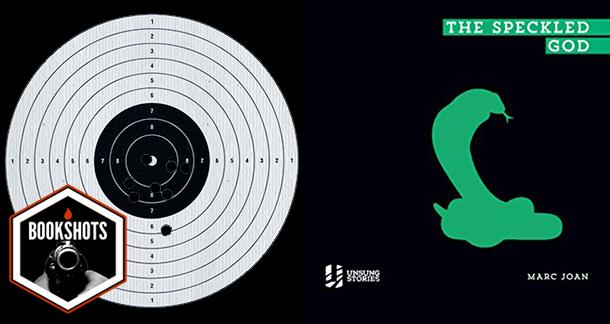 'The Speckled God' will leave you thinking and then reaching for the next title in Marc Joan's catalog.

Marc Joan, a cosmopolitan writer who grew up in India and now lives in the UK. He specializes in short stories.

A young accountant travels from the city to a jungle plantation to conduct an audit. In the process, he crosses paths with the local snake religion and their mysterious practices.

Anything by E.M. Forster

Joki de Souza is a young man with no family who draws landscapes in his spare time. He has a solid position at a major tea company, and it is his earnest desire to do a good job that leads him into the hornets' nest.

Suraj Sharma. So good in Life of Pi.

1975 India. The Bombay art and food scene sounds fantastic. Once the story moves into rural southern India, where modern civilization has not made many inroads, I become less enthusiastic.

There are teak planter’s chairs upholstered with rattan, their jointed, extendable arms veneered with decades of polish and drink rings —the stamp of cold beers left by long dead, lonely expatriates fighting off boredom and madness.

Go read this story. I loved it in so many ways. The third person narration, in which an unnamed objective narrator sifts through the historical evidence and communicates what "we" know about the events, is wonderful. Is this person a police officer, or an investigator at the tea company? Are they exposing or covering up? It's never revealed. There are also many seemingly innocuous individuals who, upon reflection, were probably not so innocent. There is a sleight of hand Joan employs that brings my mind back to the story again and again.

The setting, mostly in rural post-Colonial jungled India, dredged up memories for me of E.M. Forster, even though in this case it was not the white imperialist visiting the natives. It was certainly an outsider imposing a force on a situation he did not understand. He paid a price for it. The reader knows it's coming, but still. The Speckled God will leave you thinking and then reaching for the next title in Marc Joan's catalog.