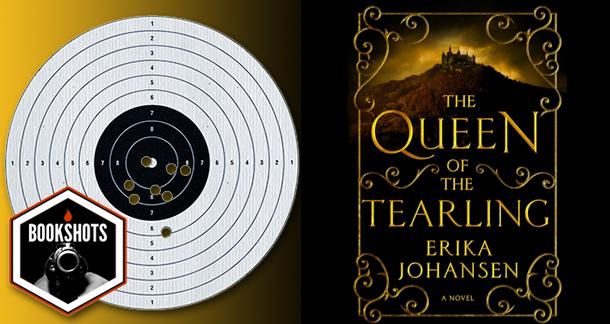 The Queen of the Tearling

My impression was neither one of gushing enthusiasm, nor of book-throwing, Goodreads-rant-inducing distaste.

After a lifetime of being hidden from potential assassins, Kelsea Glynn inherits her mother’s kingdom— a sad country under the thumb of a crazed neighboring monarch.

Kelsea Glynn, your archetypal Plain Jane, diamond in the rough kind of character.

The book is already slated to become a movie, with Emma Watson attached to the project as Kelsea.

The Tearling is a pretty depressing place where people are put in cages and sent to a psychopathic queen as part of a political treaty, so no, not particularly.

Everyone dies eventually. I think it’s better to die clean.

When The Queen of the Tearling was first announced, Harper Collins dubbed it “the female Game of Thrones” and instantly ignited a firestorm amongst readers who were angered by the implication that Game of Thrones was somehow exclusively meant for men. Even so, Tearling has been the subject of a substantial amount of hype, with the media questioning (for the umpteenth time) whether it might be “the next" Harry Potter or Hunger Games. Warner Bros. has already purchased the rights for a movie franchise, and the Guardian reported last year that Johansen has signed for a seven part series.

With so much buildup surrounding a title, it can be difficult to develop a totally objective opinion on its actual story. While The Queen of the Tearling is likely to receive a good deal of criticism due to its PR campaign, I must confess that my impression was neither one of gushing enthusiasm, nor of book-throwing, Goodreads-rant-inducing distaste. To be honest, I was often a bit bored.

The Queen of the Tearling follows Kelsea Glynn as she attempts to win the loyalty of her country, and wrest control from the Red Queen of Mortmesne. Set in a distant future on a foreign world, the Tearling was populated by British and American idealists intent on building a Utopian society. In the years since their arrival, the Tearling lapsed into a feudalistic system without any substantial remnants of earth’s technology or medicine. A potentially interesting concept, but Johansen takes her time to building up to the meat of the plot, with the first hundred pages spent mainly on horseback as Kelsea travels to the capital city. If the storyline began at chapter four, readers would miss only about ten pages worth of necessary information.

Although Johansen succeeds at creating a somewhat complex heroine in Kelsea, it’s marred by a fixation on external beauty, which seems contradictory in a protagonist who is also portrayed as introspective and practical. Kelsea herself is described as unassuming, plain, and sheltered to the point of repetition, and this nagging focus on her appearance really chafed, especially in an otherwise intelligent character.

Whoever remarked that comparisons are odious made a valuable observation. There will never be a “next" Hunger Games or Game of Thrones, because there’s only one George R.R. Martin, and only one Suzanne Collins—but there’s also only one Erika Johansen, regardless of whether The Queen of the Tearling becomes as viral a sensation as its publisher and Warner Bros. obviously hope. Overall, I did not find the engrossing fantasy I was looking for in The Queen of the Tearling, but it deserves better than to be lauded only as a Frankenstein product of popular literature.